Another Esd Has Problems in Precinct 1

When someone is willing to give their last breath for their country, it is treasonous to vilify them without merit.

As County Commissioner, one of their duties is to appoint members to various groups, committees, etc. in their precinct. Committees that are important to the oversight and compliance of groups and organizations. So, what happens when you appoint someone without the skills or desire to have oversight appointees for his groups or organizations? You have nothing but problems.

The County Commissioners; while elected are also paid positions, such as Sergio "Chico" Rodriguez . Since taking office, Commissioner Rodriguez has found it difficult to fulfill some of his duties in overseeing the activities of his boards or even appointing people to them.

Who suffers when he fails? The Bexar County Taxpayer.

According to the County Commissioners website on boards and commissions:

The EMERGENCY SERVICE DISTRICT #6 has been embroiled in legal wranglings since October of 2010 because lack of oversight allowed the former board President, Ms. Sylvia Mendelsohn, Chico Rodriguez's campaign manager, to mismanage funds and as of August 2011, had nearly bankrupted the ESD#6, with a "pet" project that started as a community center and ended up being a luxurious party hall/evacuation center and fire station (the fire station was not a part of the USDA/RD grant). The grant was actually a loan that the taxpayers will spend 40 plus years paying back.

THE EMERGENCY SERVICE DISTRICT #5, decided like Ms. Mendelsohn of ESD#6, that they wanted a new fire station. They decided to build in a floodplain on Jarrett Road, took a $250,000 project up to nearly half a million dollars and used unqualified labor (family and friends) to build a station that sat empty for a year (as of May 2010) because it was found by the Fire Marshal's office to have been poorly constructed and repairs beginning in the thousands of dollars would be needed to get this fire station working safely.

A tie between the ESD#6 and ESD#5 begins with the late, Joe Kierstead of the ESD#5 group, Mr. Kierstead served on the City/County Board Oversight Committee, appointed by Chico Rodriguez in 2004- expired in 2006, seat never reappointed, not even after the death of Mr. Kierstead in September of 2009, who was said to have served for 6 years on the committee.

At the time of Mr. Kierstead's death, it was requested that donations be made to the 100 club of which Mr. Kierstead was also a member of standing. Ms. Mendelsohn of ESD#6 took taxpayer funds and made a donation to the 100 club, which is illegal to do. (a gift of public funds)

These are both individuals with ties to committees, boards, and to Chico Rodriguez. Commissioner Rodriguez has allowed all this mismanagement of funds to go on. In the case of the ESD#6, it has been well documented that Commissioner Rodriguez knew of the activities and either he or members of his staff signed off on it and did nothing to stop it.

The firefighters were angry, mostly because of the uncertainty and the fear that nothing would get done. The community members were angry for the same reasons. They didn't see anything changing and it just added to their fears.

With the south side community experiencing growth, it prompted the creation of the City South Community Plan, aka. City South Management Authority, in 2002. It's principal goal was to have a municipal management district that would be responsible for municipal zoning and planning outside the San Antonio city limits.

Other Absentee Representation in Precinct 1:

While the other commissioners had an occasional seat that had expired and not been filled, it was Commissioner Rodriguez that had the most and the longest unappointed seats in his precinct. (as of 2011)

Mr. Gil Perez, another appointee of a West Side Development committee, also sat on the ESD#1 and was the Director, for the SAFE D Program, as well as an administrator for multiple ESD's and former President of ESD#2. Mr. Perez attended an ESD#6 board meeting to answer questions for the South side Community. Mr. Perez informed the community that seats can and sometimes will be considered in "holdover" status indefinitely and it is up to the discretion of the Commissioners to allow this. Quickly defending the lack of oversight by the County Commissioner. What is the point of having the seats if they do not appoint someone to them.

"If it is working for that particular group, then leave it alone", is what he said. What Mr. Perez and the Commissioner may not seem to understand, is that although it may be within their discretion, it's inaction that creates the dilemma that Southeastern Bexar County is experiencing. And if it is broke, then it needs to be fixed because it is not working.

Commissioner Rodriguez held a "community" meeting, the only thing lacking, was informing the entire community.

From one angry community member it was learned that the meeting was held at the Southside ISD - 9th Grade Academy on Saturday, January 8, 2010. The meeting was to continue down the path of the ESD#6 pet project. It was to inform the community of the CDBG Grant to purchase the property on 1604 and Pleasanton Rd, that is already owned by the county. It was the next step in pushing forward with the project of building the Thelma Area Neighborhood Community Center, aka. the Evacuation Center.

While it was a disappointment to the members of the southeastern Bexar County community, their complacency is what Commissioner Rodriguez relies on. If the members of the community do not unite and hold their representatives accountable, then shame on them.

Do you want an absentee representative? 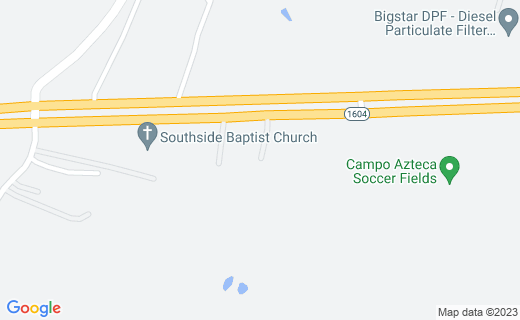