The author is a QUB Political Science honours graduate, a political analyst and has written on a variety of related issues

There are over 5000 fascinating artifacts in this unique museum

The Irish Republican History Museum is situated at 5 Conway Place, within the Conway Mill complex, just off the main Falls Road which is about 15 minutes walking time from Belfast city-centre. For visitors interested in Irish history in general and the Anglo-Irish conflict it is a hidden gem of knowledge and a treasure house of resources. Admission is free to all and the museum is a wheelchair-friendly venue.

The concept for a museum of Irish Republican history began with the late Eileen Hickey, who herself was O/C (officer commanding) of the female Irish Republican prisoners in Armagh Gaol from 1973-77. On her release from prison, Eileen returned to education, entered university and was awarded an Honours degree. She dedicated her life to her community, educating young people as a teacher at the local Conway Education Centre and began the project to build an Irish Republican museum in the city of Belfast. Tragically, Eileen lost her final battle with cancer on the 2nd of February 2006. The Irish Republican Museum Committee was dedicated to completing the project and the museum was officially opened on the 2nd of February 2007, the anniversary of Eileen's death.

The Irish Republican History Museum's Mission Statement is outlined in four key principles that Eileen Hickey was passionate about:

There are a wealth of resources available to visitors to the museum or to those involved in academic or journalistic research, including an interactive suite with multi-media facilities; a well-stocked comprehensive library of Irish history; Internet access and large screen viewing facilities.

A history of resistance

The military exhibits, including militaria from the 1798 rebellion of the United Irishmen, right up to weaponry from more recent times, are truly outstanding. There are numerous weapons on display of the type which have been used by Irish Republicans during recent campaigns of armed struggle. There are also British Crown forces' arms and ordinance from yesteryear, such as Home Rule-era rifles.

In some of the display cases, there are the famous RPG-7 launchers and their missiles which were used to devastating effect by Irish Republicans against the British Army and their local militias during the period of Anglo-Irish conflict known colloquially as The Troubles. There are vast ranges of handguns used by Irish Republicans in the most recent and past military campaigns, including the trusty Webley revolvers, right through to modern semi-automatic large frame pistols. The famous Armalite Ar-15 assault rifle is very much in evidence in the various display cases, as are a wide variety of Kalashnikov type assault rifles, Heckler & Koch G3 variants, sub-machine guns of various eras, including the Thompson and even an Ingram sub-machine pistol.

There are British army uniforms with examples of the type of firearms carried by them while patrolling on the streets of the North of Ireland, including FN FAL SLR rifles, SA80 rifles, and Browning 9mm pistols. There are also B-Specials and RUC uniforms and the weapons they have carried since the beginning of The Troubles, such as M1 carbines, Ruger Mini-14 carbines, Sterling sub-machine guns, Walther PPK pistols, Ruger Security Six magnum revolvers and even the infamous plastic bullet guns carried by both the RUC and the British Army, which claimed the lives of so many innocent victims, the majority of whom were just young children.

A museum unlike any other

There are countless fascinating artifacts and handiwork from the prisons, for instance, there is even the old heavy-duty Chubb locks from the cell-doors of the H-blocks, prior to them being replaced by wooden doors during the last few years of the prison's existence during the Good Friday Agreement's early release program and end to lock-ups at night. There is a life-sized exhibit of a cell from Armagh Women's Prison where the museum's founder, Eileen Hickey, along with many of her female comrades were routinely subjected to degrading strip-searches, often several times daily.

Space does not permit for an adequate description of the countless wonders to be seen in the Irish Republican Museum, it really would take very many visits to do the various exhibits justice. The museum staff are extremely friendly and are only too willing to assist visitors, a significant portion being academics and researchers availing of the extensive library and collections, with any questions they may have. The Irish Republican History Museum staff are walking encyclopedias on the contents of the museum, the conflict in Ireland and local Irish history.

The museum is open Tuesday-Saturday from 10am-2pm daily though visits outside of those hours by groups or individuals can be arranged via the museum staff. The contact details are:

A visit to the Irish Republican History Museum is highly recommended if you are visiting Belfast or the North of Ireland. It is the only museum of its kind open to the general public in Belfast. Parking is not a problem if traveling by car with plenty of parking spaces nearby. Buses and the famous Black taxis travel the route to the museum, just off the busy Falls Road every few minutes during opening hours. Arrangements can possibly be made with the museum's staff to be photographed with exhibits that visitors wish to retain as mementos of their visit. 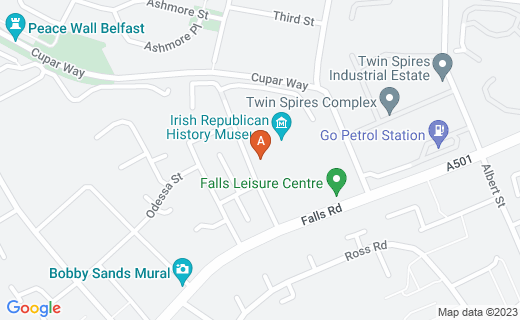 The museum is only 15 minutes walk from the city center, or less than 5 minutes if using a bus or shared black taxi which will cost you only £1.80