Black Like Me: The Book that Changed Racism in America

Maybe the guy who wrote the book is the big story

In 1959, a white man named John Howard Griffin, hoping to pass for black, darkened his skin and travelled for weeks throughout the Deep South of America, where racial segregation had ruled for decades. Griffin rode the Greyhound bus and hitchhiked, interacting with both white and black people. Reportedly Griffin’s relations with white people were generally unpleasant. Then Griffin wrote a short book about his experiences entitled Black Like Me, published in 1961. The book sold 10 million copies and became a contemporary classic, as well as a book high school teachers had their students read.

Griffin certainly appeared to be the type of man who would try such an “experiment,” because throughout his life he lectured about race relations and social justice. A movie based on the book was released in 1964, and for a time Griffin became a celebrity, though he still had numerous detractors and enemies. For a time, he had to flee with his family to Mexico.

In an article entitled “Crossing the Color Line” featured in the October 2011 issue of Smithsonian, author Studs Terkel was quoted as saying that Griffin “was one of those guys that come along once or twice in a century.”

Let’s explore the history of this extraordinary man:

John Howard Griffin was born in 1920 and raised in Fort Worth, Texas. While a teenager, Griffin studied French and literature at the University of Poitiers in France. Then Griffin worked as a medic in the French Resistance, at times helping Jewish children flee to England during the early years of World War Two. Later, Griffin served 39 months in the United States Army Air Corps, along the way studying the cultures of the Solomon Islands in the Pacific.

In 1945, while serving in the United States Air Force, Griffin was wounded by shrapnel in an air raid, leaving him blind. While convalescing, he began to write in a serious way about the experience of being left without sight: “The blind can only see the heart and intelligence of a man, and nothing in these things indicates in the slightest whether a man is white or black.”

Then, for reasons never fully explained, Griffin regained his eyesight in 1957, allowing him to embark on his later “odyssey” throughout the American South, a land rife with racial prejudice and hatred.

Griffin, determined to investigate – up close and personal, if you will - the trials and tribulations of the American Negro, visited a dermatologist who gave him a series of drugs designed to darken his skin. Griffin also spent many hours under a suntan lamp and shaved his head to hide his straight hair. Hearing of Griffin’s plan, a friend told him, “You’ll get yourself killed fooling around down there.”

Through the Jim Crow South

Griffin ventured through the American South, a segregated land of so-called Jim Crow laws, where black people could only go where they were allowed to go, or face violent retaliation, even death by hanging or other gruesome means. Apparently Griffin’s “disguise” fooled white people, because he was treated rudely by them and often called the n-word. In his book, he wrote, “That word leaps out with electric clarity. You always hear it, and always it stings.”

Griffin took a bus to Hattiesburg, Mississippi, where a lynching had recently taken place. In alleys, people were whispering about it. Griffin felt great alienation and fear, writing in his book: "Hell could be no more lonely or hopeless." At times he hitchhiked, and whites would often give him rides, though these incidences would nearly always end in hateful stares and derisive words.

After this trek, as Griffin sent reports to Sepia magazine, which had bankrolled the project, Time magazine and CBS found out about him and began publicizing his experience. Soon, Griffin began getting death threats and feared a white mob would come and get him any day. This was when he moved with his family to Mexico for a time.

But, while back in the United States during 1964, the Ku Klux Klan caught Griffin on a country road, beat him up and left him for dead.

The tagline of the film was: “I changed the color of my skin. Now I know what it feels like to be black.” James Whitmore Jr. played Griffin in the movie of the same name produced in 1964. Whitmore often played earnest middle class guys in movies, television and on stage, so he was a good choice for this difficult role. This searing, gut-wrenching movie is hard to watch; it’s filled with instances of prejudice, violence and racial animosity. It could be said that people are at their worse when expressing hate. At the very least, the movie seems an accurate version of Griffin’s book.

John Howard Griffin died of heart failure at 60 in 1980. As one-of-a-kind as Griffin seemed to be, was his journey and resultant book worth the effort? Black-power advocate Stokely Carmichael said Black Like Me was “an excellent book – for whites.” This appears an understandable viewpoint, as people can never truly understand the experiences of others. Nevertheless, perhaps it could be said the book helped change the way America viewed itself, for soon thereafter the United States Congress passed the Civil Rights Act of 1964. This bill essentially outlawed segregation in the U.S.

As for Griffin himself, did he actually exist? This man had the guts to do what nobody else dared to do. Perhaps society needs many more such folks, white or black.

And buy a copy of the book! 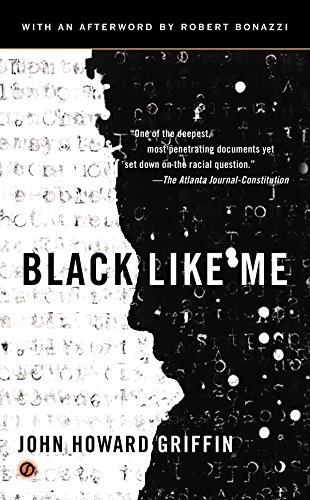