Boy George: Not to Be Confused With the Culture Club Singer Speaks to Evan Davis on Newsnight.

George Osborne was part of the government that asked the people of the UK did they want to stay in the EU or leave? There came a resounding 53% for leave and 48% for staying. Who can forget in 2016 when the morning dawned when David Dimbleby on the BBC said: "We are leaving the EU" after the votes came in.

Ever since these results, the schism between remainers and leavers continues to this day. Remainers even now hold on to the concept of another referendum that might put right what went wrong (as far as they are concerned) in the 2016 EU referendum. Liberal Democrat leader Vince Cable is a supporter of another referendum and he is not the only one. However, it would appear that the UK is destined to leave the EU come next year. How that exiting of the UK from the EU will transpire I'm sure not even the sharpest political pundit really knows for sure. Will it be a no deal leaving or a deal leaving exit, either way, the UK short of some unforeseen happening is leaving the EU.

The border between the Republic of Ireland and Northern Ireland (UK territory) keeps coming back to haunt Brexit negotiations between the EU and the UK. Dominic Raab is the governments Brexit man trying to cobble together a deal with the EU's Michel Barnier. Theresa May is sticking by perhaps with compromises the original 'Chequers' plan (so-called because she and her cabinet agreed on this at 'Chequers the retreat for British Prime Ministers in the country). Except that not everyone agreed with the 'Chequers' plan namely Boris Johnson and original Brexit man David Davis. Both resigned and have been carping from the backbenches ever since.

Back to recent history after the defeat of the remain campaign in 2016, David Cameron stepped down from the job of Prime Minister. George Osborne when Theresa May became Prime Minister was sent to the back benches to be replaced by Philip Hammond or 'Spreadsheet Phil' to give him his nickname.

George Osborne was the MP for Tatton in Cheshire and when it was revealed he had 6 jobs in the media he resigned as an MP. He now works for 'The London Evening Standard' where he has written articles attacking Theresa May and her government.

Evan Davis interviewed George Osborne on 'Newsnight' and when asked if he had any regrets about his time in office he admitted he had. For example, he admitted the 'Remain campaign' to leave the EU was rushed and people should have been given more information. Like for example what were the benefits to the UK of staying in the EU? Evan Davis asked Mr Osborne if he regretted some of the vicious things he had said about Theresa May. Mr Osborne replied with hindsight that he did but said the reason why the Conservatives lost their majority in the 2017 general election was that they copied UKIP. Mr Osborne had a warning for Theresa May saying that whenever the next general election comes Theresa May should not ape Jeremy Corbyn.

George Osborne admitted that the only reason he went along with the 'Remain campaign' was that David Cameron had called it and supported its implementation as a referendum. When Evan Davis put to him that his austerity measures had made many to vote for leave as a snub to him he didn't agree with that.

Regarding immigration targets, George Osborne said that was now wrong. He said the Conservative government didn't realise at the time how immigrants from the EU and elsewhere played an important part in the British economy.

What will be the future for this ex-Chancellor? Will he make a return to politics or is he happy doing what he is doing? Time will most certainly tell.

The Man of Austerity. 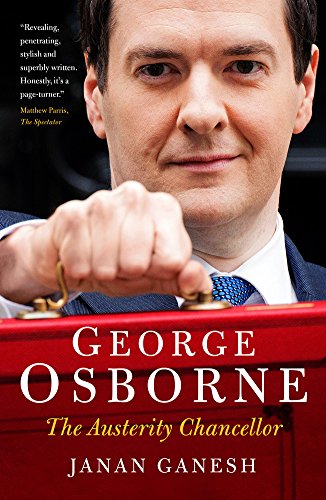 It would appear unlike his very vocal ex-Chancellor George Osborne David Cameron has kept a low profile. It would seem David Cameron was glad to step down as British Prime Minister in 2016. Although he did promise to remain after the defeat of his stay in the EU campaign he did the opposite. He stepped down and abandoned the British people and the country to face Brexit. His successor Theresa May was and probably still is a remainer reluctantly having to oversee the departure of the UK from the European Union.

So what has David Cameron been up to since he left office? Well, not a lot if you were to follow the media it appears unlike Mr Osborne Cameron is keeping well and truly below the radar.

However, if you do want to see what Mr Cameron is doing these days you catch him on his own Facebook page. Obviously, he will have a Twitter account too and probably accounts with other social media outlets.

It would appear he has written a book with John Kerry (The John Kerry? possibly) about the environment. On his Facebook page today he is talking about the state of our oceans.

One wonders if David Cameron will ever write his memoirs about his time in office. Or will he have an open and frank interview about it as George Osborne has done? I'm sure if that day ever dawns there will be plenty of listeners from all hues of the political kaleidoscope.

Polly Toynbee Took Osborne To Task Over His Austerity.

Polly Toynbee certainly took George Osborne to task last night over his austerity policies when in office. She said Mr Osborne had hit the poorest members of society hard with his austerity measures.

George Osborne, when given the chance to reply by Evan Davis, was a bubbling wreck of a man. Nervously answering her question with an expression that seemed he didn't care or understand or thought the whole thing was a huge joke. He defended himself in the way most Tories do saying the UK had a massive deficit after Labour left office.

This was true because Labour left the incoming Tories and Lib Dems a note. A note saying "There is no money left" and certainly while Gordon Brown/Tony Blair was in office they did not always get the UK's finances correct.

That said if the government had to cut things to balance the books as George Osborne said last night why did they have to hit the poorest? Instead of taking money away from some of the poorest people in our society the government should have cut the overseas aid budget. This money goes to Africa which never seems to get any better and India that is now becoming a world superpower both in military terms and in technology terms.

It would seem this government and previous administrations of all parties would rather give money abroad then help the poorest people in our society.