I would like to introduce my readers to Carol Martin, a professional northern Ontario journalist who reports that she received training at Cambrian College and Algoma University. Five years ago, when I first touched my toe into the world of journalism, I looked to writers like Carol with equal parts awe, wonder, and respect.

On Carol's Facebook page she describes herself as a "Thinker, experiential liver of life, seeker of truth, joy, abundance and enlightenment." Clearly, Carol is not only an accomplished journalist and writer, she is also a great person who has dedicated her life to bringing truth to light in the name of making Canada the best country it can possibly be. Or is she?

In 2012, I found myself completely alone with knowledge I possessed with regard to the suspicious death of Nadine Antoniazzi when my then-boss, Lou Chouinard, decided to handle a situation at work by informing me that he was going to involve his friends in the "mob in val dor." Val-d'Or is a mining community in northern Quebec, located across the Ontario border, not far from Kirkland Lake. Nadine Antonaizzi was the sister-in-law of Kirkland Lake Mayor Tony Antoniazzi.

Mr. Chouinard has since testified, under oath in a court of law, that he doesn't really have a friend in the Val-d'Or Mafia. Whether or not a person with real connections to the Mafia would actually admit this under oath remains to be seen. Court proceedings never progressed to the point where this seeming discrepancy could be fully fleshed out. It would seem that the issue of whether or not Mr. Chouinard perjured himself also remains to be seen.

After writing about this on my blog, and lobbying Mayor Antoniazzi, his lawyer, Julie Richard, and other politicians, Yvan Godin with the Ontario Provincial Police arrested and charged me with both criminal libel (a charge that has been deemed unconstitutional in five Canadian provinces) and criminal harassment. After my lawyer, Daniel Baker, and I launched a constitutional challenge the charges were quickly stayed.

Seemingly to shed me in as negative a light as possible, the OPP issued a press release with regard to the harassment charge, but not the libel charge, which was picked up and republished by a number of Ontario publications, including Bay Today, Timmins Today, and the Wingham Free Press, among others. Bay Today and Timmins Today are both owned by Village Media, with whom Carol Martin appears to be employed.

Knowing that I was standing up for an innocent dead woman, possibly involving what appeared to be an organized crime group, I was certain Village Media would be interested in hearing both sides of the story after my charges were first withdrawn (they were then reinstated), which prompted me to write to them:

My name is Stephen Sinclair. I write under the pen name Scott Hough. My writing appears on many websites, including Investopedia and the Inquisitr. I have over 200,000 paid published words this year and over 20,000 views this week.

In March you printed this article about me: http://www.baytoday.ca/content/morelocal/details.asp?c=75499

I was wondering if Bay Today would be interested in reprinting this recent article from my blog, or perhaps considering an original article for publication.
https://scotthoughauthor.wordpress.com/2015/09/08/the-kirkland-lake-opp-the-northern-news-and-the-big-sham/

If it helps your decision at all, the OPP appears fractured in their view of me, the OPP North East Twitter account recently called the entry provocative and favourited my thanks for their readership.
https://twitter.com/ScottHoughAuth/status/641317831271936000

I would be happy to provide any other details.

I received no reply, so I wrote again:

With regard to your story dated March 17:
https://www.baytoday.ca/more-local/north-bay-man-charged-with-criminal-harassment-19820

I wanted to let you know that these charges have been withdrawn. You may verify this with the OPP.

I fully expect you to report on this. If you choose not to, I will take it as a sign that you are complicit with family members of police officers intimidating citizens with the Val-D'or Mafia and the suspicious death of Nadine Antoniazzi and report on the situation thusly.

I was shocked to receive this reply:

"In order to maintain journalistic integrity, BayToday does not make a practice of removing previous news articles from our site. However, should you provide proof that you were acquitted of the charge(s) against you, or they were dropped, we can amend the article in question to indicate as much."

Pardon me?
Re-read my e-mail. I am fully aware of journalistic integrity and I NEVER asked you to remove the article. I asked you to report the truth. Your stance on this is noted. The onus is on you to contact the OPP and confirm that the charges were withdrawn. It never got to the point of me being acquitted.

To which Carol, identifying herself for the first time, responded:

"As a news site, we serve the news interests of the public and the public isn’t interested in your charges being withdrawn. We do not have the resources to chase down every withdrawal and acquittal people tell us about nor are we going to set a precedent for your case. We are not going to contact the OPP unless it’s for a newsworthy story."

"You are by no means the first nor will you be the last person to tell us he or she faced trumped up charges that were withdrawn or that he or she was acquitted when the judge heard his or her case. As with everyone else and as a courtesy, we will add an editor’s note to the police news release indicating the charges you faced were withdrawn as soon as you send us some sort of proof in writing that this is the case. We will add that note to the release wherever it appears on any of our sites."

Can you see the problem here?

In contradiction with Carol Martin's assertion that the "public isn’t interested in your charges being withdrawn" is a valid deciding factor for not following up on a story Village Media decided to begin covering, The News Manual states:

"It is essential that a newspaper or broadcasting station which starts to report a court case, continues to do so every day until it is finished. Otherwise the report of the case as a whole cannot be fair, and it will then lose the protection of privilege."

Though it appears to have since stopped the practice, when The Wingham Free Press first published the OPP release it was soliciting cash payments from those featured in police press releases to take them down. To Carol Martin's and Village Media's credit, neither ever suggested that a payment could motivate them to take the release about me down. 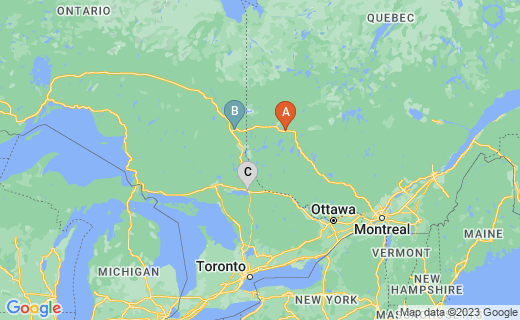 Are there any real journalists in northern Ontario?

As a professionally trained journalist, Carol Martin almost certainly must be aware of the principle outlined in The News Manual with regard to publications following up on court proceedings that they begin covering, until complete. It would seem to be common sense.

Further, a citizen journalist being arrested on unconstitutional charges for writing about seeming fraud, a suspicious death, and organized crime, is newsworthy. The fact that Village Media chose to run the initial story would seem to demonstrate this.

How did this happen? It is no secret that the publishing industry has been confronted with massive economic changes, which have limited funds media outlets have to spend on investigative reporting. If Bay Today and Timmins Today are going to continue to operate they have to print something. As a result, it appears that journalistic integrity was thrown out the window in favor of allowing the police to dictate news, unchallenged.

Currently, it appears that police forces in northern Ontario face almost no scrutiny by local media, even with regard to seeming wide-scale fraud and suspicious deaths. Village Media appears to take the OPP, and other forces, at their word, which would seem to put its publications squarely in the category of state-run propaganda, allowing the police to selectively report what they want, in a manner causing the most damage to many who go on to be vindicated.

How many innocent people have lost their lives in northern Ontario as a result of this sham? How many people have been fleeced of their life savings by people like Paul Antoniazzi, while Village Media has idly stood by, fully aware of what is transpiring, yet unwilling to report on it? How many other suspicious deaths remain unquestioned?

To be fair to Carol Martin, she is not the only journalist in northern Ontario who has fallen into this seeming lazy, unaccountable method of operating. As I have previously written with regard to Rick Owen and the Northern News:

Questioning a mayoral candidate about his investment holdings, particularly in the face of a suspicious death, is the job of journalists, which, quite frankly, this writer is amazed that the local Kirkland Lake newspaper, the Northern News, has not once taken part in, and has, instead, printed articles of a seeming flim flam nature covering stock offerings from companies comparable to Opawica and RT Minerals like Kerr Mines Inc., the stock of which has lost almost all of its value.

I do not believe that the recent retirement of Rick Owen, the writer responsible for many of these pieces with the Northern News, and my arrival on the northern Ontario reporting scene, is a coincidence.

How many hundreds, or thousands, of northern Ontario residents have had their names dragged through the mud by media outlets seemingly unwilling to ask even the most simple of questions, or perform even cursory follow-ups? "Kill them all and let God sort them out," may have been effective for Arnaud Amalric during the Crusades, but would seem a barbaric modus operandi for modern journalists.

Do journalists have a responsibility to follow up on arrests and charges they begin reporting on?