Climate Change And Erosion In America

Erosion Increasing On the North Slope

Barrow is the city farthest north in the United States, on the north shoreline near fishing industries of Alaska and near North Slope oil operations.

To the east is vast expanse of ANWR, the large Alaskan national park, a park that is surreal in its large numbers of caribou and other wildlife.

Because of Arctic Ice Melt in the largest amount during 2012 ever recorded in history, the north shoreline of Alaska eroded more than usual. All of America's shorelines erode continually to an extent, but Alaska's erosion reached a point in the late 2000s that caused Indigenous fishing villages to pick up their Native Alaskan communities and move at least 40 miles inland.

At the same time, the long-sought Northwest Passage through Northern Canadian Provinces revealed itself for the first time under conditions of greater ice melt. 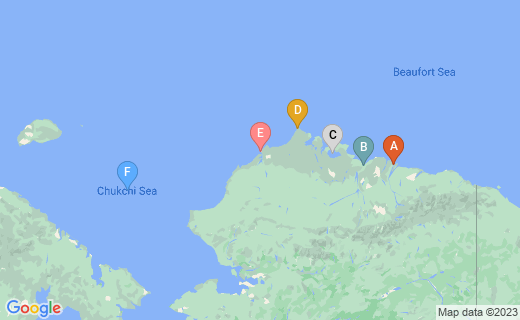 At the eastern edge of the National Petroleum Reserve in Alaska, an unprotected wildlife area.

Site of a new oil boom.

North Slope communities are gradually moving inland by up to 40 miles. Similar shoreline changes occur In eastern New Jersey by the Atlantic Ocean. but not as quickly. 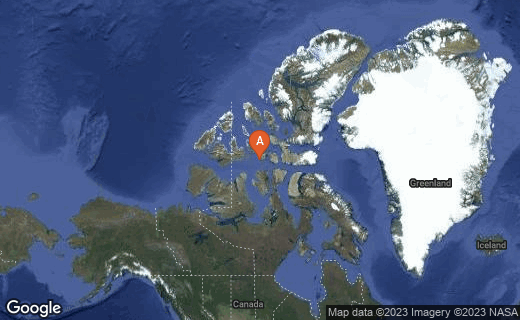 While all this is occurring, the expanse of Antarctic ice is increasing to cover more of the ocean's surface around the southern pole, according to NASA satellite photography.

However, even though the north polar cap is reducing and the southern polar cap is expanding, there is a net increase in ocean levels - ocean levels are still higher than in previous years and shoreline erosion is greater.

The Gulf of Mexico is another example of increasing erosion, discussed further below, and so is the Jersey Shore.

An oil boom in Wainwright on the North Slope is occurring in the 2010s with new oil drilling to the west in the Chukchi Sea. The new drilling also negatively affects Native Alaskans in the area. Shell company moved in to nearly take over the town as an oil drilling base and Indigenous People in the town of about 550 are worried about potential oil spills.

Any spills would kill wildlife that the Inupiats hunt annually - walrus, bow-head whale, and others. Inupiats also fear that helicopters overhead will scare away their caribou herd. They hope that the Shell initiative to study life cycles of area mammals, birds, and fish will result in something positive in addition to the jobs that Wainwright residents have secured with the oil company.

Some of the fish and seagoing mammals have already migrated south of their usual waterways and oil drilling may push them farther south. Climate warming and the melting northern ice cap further exacerbate the migration away by wildlife. 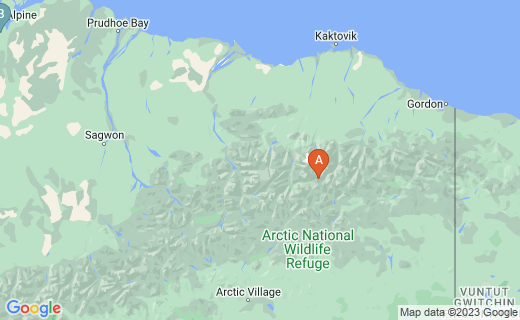 The forested area (green) east of ANWR is in Canada.

Oil and Its Effects On Wildlife and Erosion

A large oil reserve lies next to ANWR and extends into that wildlife refuge, with many groups in America wanting to see oil drilling increased there. Adjacent to ANWR is a Canadian National Park and preserve as well. Drilling can kill off plants and animal life, but some oil companies replant deforested areas. Drilling may otherwise promote further erosion.

Indigenous communities may continue to move farther inland in search of resources for survival. However, wildlife and native plant species may need to be repopulated and hopefully oil companies can assist with these initiatives through community reinvestment.

Land of Extremes: A Natural History of the Arctic North Slope of Alaska
Buy Now

The worldwide media and the public speak of climate change more every day - what it is, its consequences, and what we are to do about it.

If the Industrial Revolution had not occurred and human populations not expanded and increased across the Earth and further led to the increase in numbers of food animals raised, then we might not have such a political issue today, but both did and we have. The expanding Aerospace Industry and its use of fuel exacerbates this several fold.

Atop the warming phenomenon in 2012 has been added severe sunspot and solar flare activity that have burned portions of our planet to a crisp - greater numbers of forest fires beyond what nature calls for in deleting deadwood, droughts, crop failures, rising numbers of heat related human and animal deaths.

We may be able to fight carbon emissions, but we have no way of fighting increased size and frequency of solar flares as yet. They helped make 2012 the year of largest polar ice melt in history, compounded by dark-colored polluting materials on the ice that absorb heat. Our solar flares in 2012 may mark the burning of greater portions of the Earth each year and we look with interest at Australia and surrounding areas as their own Summer 2012-2013 draws near in the Southern Hemisphere.

July has become a dangerously hot month with many power outages in the Midwest USA, so I wish Australians and surrounding nations better weather than we had during our summer.

Aside from heat, power outages, and deaths, all the climate changes listed above have the added effect on America's problem of eroding shorelines by quickening the process. The northern polar ice cap is practically evaporating.

The tides of the oceans erode our shorelines naturally to an extent - a forty-something friend who visits the New Jersey Shore where he grew up found his former home site under water in the mid-2000s. Rising sea levels related to ice melt give tides a push toward causing in greater erosion; larger amounts of water can erode soil to a greater extent because they increase in power over smaller amounts of water.

However, all of the melted ice does not stay in the oceans. Some evaporates again and causes severe snowstorms like those of 2011-2012 in the American West, Southwest, and East Coast areas, London UK, and other places. Meanwhile, summer began in Ohio's February 2012, July being surreal - our public libraries opened even on July 4th to give people respite from their 2-and-3-week-long power outages and 100+ degree weather. All this was predicted for the 2012 London Olympics and the Midwest suffered it instead - but it did happen.

Other Changes - Dead Forests Revive and Natural Resources Are Revealed.

Gulf Intercoastal Waterway On the Map 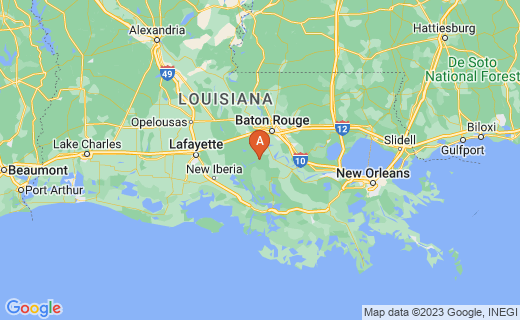 Southern US shorelines are also eroding more quickly than usual. PBS calls it the Vanishing Coastline.

The iconic cypress trees in the Louisiana coastal areas are dying in groups as salt water eats into their roots. Indigenous Peoples' cemeteries are underwater and family members visit them in boats. Since 1912, the state has been reduced by 1,900 square miles of coastal land.

The southeastern corner of Louisiana is thin in soil and the silt deposited by the southward bound Mississippi River. Water can flow inward from a rising Gulf of Mexico and through the Gulf Intercoastal Waterway.

Especially around New Orleans, flood walls and dykes are necessary to protect residents and native wildlife and plant life from the destruction that we learned is possible in hurricane episodes like that of 2005's Katrina. It has taken years to rebuild the area and in 2012, the work is not yet complete. Some of this land is already in danger of total submersion.

One island in particular is located in the watery area of Southeast Louisiana and is of interest because it is the home of two long-time Native American bands. These bands are in danger of losing their homes to rising waters southwest of New Orleans. 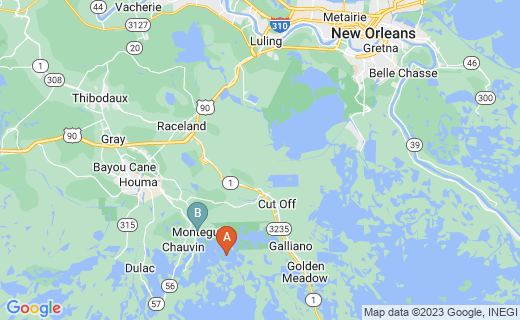 Native American Bands In the South

According to scientific measurements, the island is disappearing into Terrebonne Bay little by little, as waters rise. Ironically, terrebonne is French for "good earth" or "good land." The land has been made of rich soil deposited by the Mississippi in the past, but is eroding and submerging in the 2010s. Levees built in the 1920s prevented additional Mississippi silt from reaching the island to rebuild it for almost a hundred years and now, the island itself is sinking in addition to the waters rising.

A wildlife management area protected by the US Federal Government is also located in this area and on the island. Some of the wildlife is likely to move out as waters rise. Beasts of the Southern Wild as a film is set in a location patterned after the Isle a Jean Charles. Notice "B": on the map above - Montegut, Louisiana is the town near the endangered island from which the stars of the film were hired.

For 170" years, the Biloxi-Chitimacha-Choctaw lived on a remote island as fishermen and harvesters of oysters and fur animals. They had a 22,000-acre island that was reduced to a 320-acre tract by shoreline changes. About 20 houses remain in 2016.

Native Bands On the Island

Terrebonne Bay and the Island 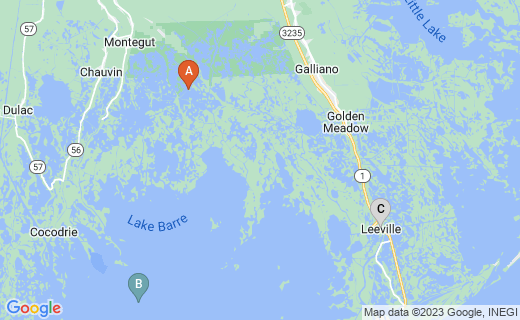 The Houma Native American Reservation is located in Golden Meadow, farther south and nearer to the Terrebonne Bay than the endangered communities mentioned above. The reservation is also in danger of flooding. Houses are already on stilts.

The Houma People do not qualify for federal aid, since they are only state-recognized. If the State of Louisiana cannot help when Houma land disappears, then the tribe will find itself moving again, just as they did under the Indian Removal Act of 1830. At this time, no one knows where they will go.

As America's coastal shorelines erode, people of all ethnicity living along those shores will be moving farther inland. This includes all sorts of people along New York and New Jersey shores, along with descendants of Indigenous Peoples - especially around Alaska, Louisiana, and North and South Carolina.

Last Stand On the Island Of Jean Charles