Since the Industrial Revolution, the Earth has experienced a greater magnitude of impact in climate change and global warming at the hands of humans. However, some natural events continue to occur and these add to the changes and warming.

Natural events inputting a contribution to global warning include many, some of which we likely have not yet discovered. Of those we know, interesting related events include increased solar activity, asteroid impact, earthquakes, expected cyclical warming and cooling, regularly occurring North-South pole shifts (every several-100s or several-1000s of years), algae accumulation in the oceans, and overeating by wildlife. The last may be a surprise to some readers.

An eruption in Alaska during June 1912 created a land collapse around Mt. Katmai, which filled with water to a depth of 800 feet and a diameter of about 6 miles.

Animals and humans migrate in order to find more suitable climates and food sources. This undoubtedly occurred before the Big Ice Age as well as it does today. If animals and people eat an area of land bare to the dirt and move on, that dirt becomes a desert. It erodes in the rains and the winds.

If this process should ever continue for about a hundred years and cover the Earth with deserts, then all atmosphere will be lost, because plant life is necessary for an atmosphere. The Moon is a desert and so is Mars - cold deserts. Their craters may be from volcanic activity in the past as well as from more recent asteroid impacts.

Volcanic activity can kill plants, wildlife, and humans and change the climate. It did so in Alaska in 1912. 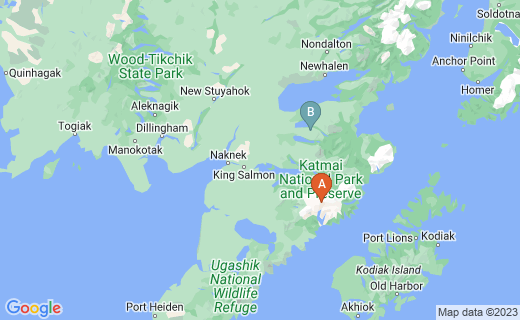 Top 10 List of Earthquakes Since 1900 Includes Two in Alaska

Out of the Top 10 Largest Earthquakes since 1900, Alaska, Chile and Indonesia have each experienced two. All are around the Pacific Rim.

One hundred years ago, large natural events were more attended -- Today we have space ships rocking the Earth on take off and the sands of the Gobi desert eroding and flying through the atmosphere to California; we have nuclear reactors exploding in Japan and sending their radiation to the American and Canadian West Coasts - all much more spectacular to the modern mind than volcanoes were when they frightened people in 1912.

Before the middle of June 1912, Alaska's Novarupta (New Eruption) coughed up 45 times the amount of lava compared to that released by Mt. St. Helens in 1980. Mt. St. Helens was considered a leading catastrophe of the century, but Novarupta's was the largest and most powerful of the century and among the Top Five Largest Volcanic Events in Recorded History. Not only that, but the eruption created a land collapse around Mt. Katmai, which filled with water to a depth of 800 feet (the depression was about 2/3 of a mile deep, itself).

Novarupta is the Largest Eruption Worldwide to June 2012 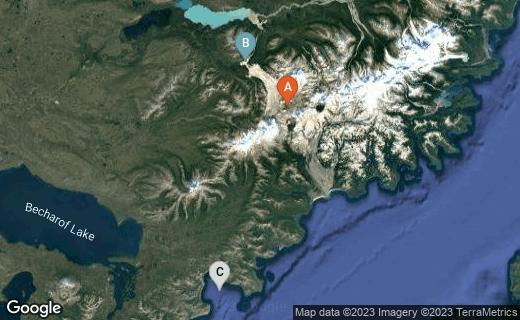 An earthquake occurred at Pulae Bay, about 40 miles south of the volcano, two hours before the eruption.

Alaskan Volcano Covered Much of the World In Ash

The mountain at Novarupta exploded three times in three days during June 1912, spewing pumice stones into the atmosphere as well as lava. Remains of this pumice is still found in 2012 on the beaches of Kodiak Island to the south (see map below).

So much ash fell to Earth during the explosive eruption that it also remains on the ground of the valley surrounding the volcano. This area is called the Valley of Ten Thousand Smokes.

After June 9, 1912, ash was found around this area in layers of up to 700 feet high. The deep layers of ash blew on Alaskan winds across Canada and America and all the way to Algiers.

In the Alaskan valley, much plant life and wildlife was destroyed, but the area's salmon was almost completely exterminated. Their recovery to previous numbers required over eight years. today, tourists can see many fish, brown bears, hundreds of flower species and other plants and animals.

The Spread of 9 Layers of Volcanic Ash, A to B 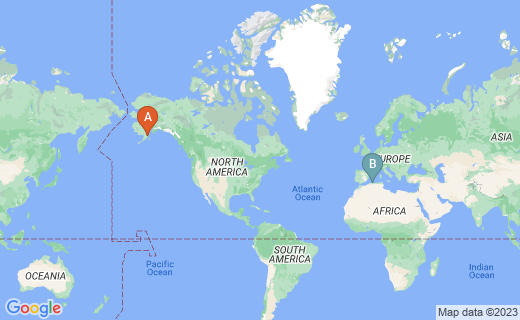 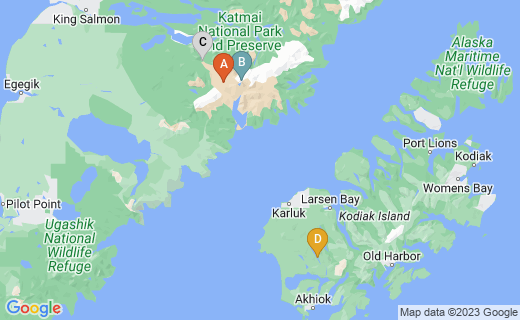 The lava that was released through Novarupta had built up under Mr. Katmai, but traveled 6 miles west, underground, to come out at Novarupta.

This is 40 or 50 miles from the eruption site, but pumice stones and ash are still found here, many years after 1912.

Commemorations of Novarupta and Katmai

Answers at the Core of Earth

Some people have said across the 20th Century, Let's stop the volcanoes from erupting.

In answer, scientists find that this would be very difficult to accomplish.

Secondly, the Earth needs a molten, rotating core in order to maintain its gravity and hence, its atmosphere. An occasional sloshing to the surface via a volcano is inherent. Magma might be captured somehow and siphoned into Earth-orbit space, where it might harden into an asteroid, but might it not fall back to Earth and do damage?

Plug up our current volcanoes, and lava will spew out of other mountains and possibly push around the tectonic plates of the planet to a greater degree than if left alone. The planet might burst open in lesions like those of earthquakes experienced in California, where bridges twisted and cars fell into gaping pits.

Thirdly, if we found someone to cool the magma in the Earth, then the cooling would have an impact on gravity and our atmosphere, hence on our climate. The well researched Red Mars book series found that Mars possesses a dead center, cold and solid. Therefore, it has little gravity and cannot hold an atmosphere to itself (also, it does not have the necessary trees and other vegetation for atmosphere).

The scientists' solution in the book series was to use space vehicles to force asteroids to impact Mars many times until the core was broken apart and raised in temperature. This was a sizable undertaking. In real life, it would be too expensive to attempt and possibly physically impossible.

At the end of all this, our planet has had volcanoes, has volcanoes, and will have volcanoes and sometimes they are going to erupt. A volcano that erupted in Alaska in 1912 damaged the environment and wildlife, but let humans escape.

The lands around the entire Pacific Rim, the perimeter of the Pacific Ocean, are more at-risk for earthquake than lands farther inland from the waters.

A similar situation occurs in the Atlantic Ocean, but the Pacific Rim is more highly at-risk, partially because of a greater number of volcanoes and the constant upheaval of nearby tectonic plates.(We seem always to be hearing about how California will sheer off from the Lower 48 and drift away.)

An old scientific theory (pre-1970s) proposed that the Moon was ejected from or pulled away from land that is now missing from the Pacific Ocean. Such a ripping away might cause instability along the Pacific Rim - or the instability could be chalked up to continuing volcanic activity since the planet was formed. The US National Geological Survey shows on its maps that Southwest Alaska experiences earthquakes quite often. Earthquakes in this region are often accompanies by volcanic activity, such as increased smoke and tremblors.

The volcanoes of Alaska are still active, although not producing sizable quantities of lave/magma at this time. However, the northern shores of Alaska particular are shrinking and receding as sea waters rise and humans move inland to find new living space. At this rate, large eruptions could affect greater numbers of Alaskans than were affected in the less densely populated 1912 era. Local watch and evacuation plans are in place in some Alaskan communities, just as they are for hurricanes in Louisiana and fires, earthquakes, and mudslides in California.

Climate Change On the North Slope