I have been studying the science of global warming with a passion since the late 1970s and earned a degree in Environmental Science in 1992.

Crisis of Global Sustainability is a book that was written by Tapio Kanninen, who has a long history of working with international bodies on world problems. The book, which was published in 2013, chronicles various global problems that threaten the sustainability of human life on Earth, as well as world organizations and institutions’ historical response to global sustainability problems. It also explores several proposals that have been made to address sustainability issues on a global scale, using both existing world government organizations, such as the United Nations, and proposed organizations. Although the book mentions several global sustainability crises, it mainly focuses on the threat to mankind and other living beings that is posed by global warming.

Awakening To The Crisis of Global Sustainability

The late 1960s and early 1970s were a time of human awakening to the growing crisis that threatens global sustainability. The book examines how an organization called the Club of Rome, which has its origins in the late 1960s, increased the awareness of the crisis of global sustainability substantially in 1972 with the release of their landmark study The Limits to Growth. It also explores how world government organizations, such as the United Nations, played a role in this awakening of consciousness via several high profile environmental conferences that were held in the early 1970s, such as the United Nations Conference on the Human Environment that was held in Stockholm, Sweden in June 1972.

Addressing the Crisis of Global Sustainability

Crisis of Global Sustainability addresses the looming global warming crisis by outlining several proposals that have been made in recent years to address global warming and bring carbon dioxide (CO2) levels and temperatures down to levels many scientists believe are compatible with human sustainability on Earth.

The first proposal, called the One Degree War Plan, sounds like something from a science fiction thriller. The backers of this plan believe that the two to four degree Celsius targets that are currently being discussed as the maximum allowable amount of global warming are too high and risk a global sustainability catastrophe. The One Degree War Plan envisions the most powerful countries in the world forming an organization to force reductions in carbon dioxide emissions on countries throughout the world, whether they want to or not, by use of economic, diplomatic, and military pressure. This coalition of powerful countries has been dubbed “the coalition of the cooling.”

The second proposal is backed by well known entrepreneur and billionaire Sir Richard Branson, who envisioned a Carbon War Room that will coordinate efforts to combat global warming by identifying, promoting, and helping to implement the best carbon neutral and carbon reduction technologies that are developed over time. Branson followed through on his vision and established the Carbon War Room in Washington, DC during 2009.

The third proposal envisions setting up a world agency called Global Crisis Network (GlobCribNet) to coordinate local, regional, and national responses to the crisis presented by global warming. An envisioned, GlobCribNet would act as a crisis center, operations coordinator, research institution, and think tank to address the global warming crises on a global scale using the best resources available.

A Critique of the Solutions Provided in Crisis of Global Sustainability

One valid criticism, which the author acknowledges in the epilogue, is that the solutions offered in the book are top-down solutions that rely heavily on a coordinating world body to address the looming global sustainability crisis. Given the fact that human beings find it difficult to form a consensus and often do not want to cooperate on solving issues beyond their local domain, it may be unrealistic to assume that a world body could effectively gain the cooperation of mankind to effectively address global sustainability problems. Perhaps if the crisis was acute enough, mankind would come together to address it under the umbrella of a world governing body, such as those outlined within the book. However, in the absence of a clear and present sustainability crisis, solutions to global sustainability problems may be driven by forces that impact humans on a personal level rather than a world governing body. These may include economic forces that cause the price of fossil fuels and food to skyrocket, causing humans to change to more benign non-carbon based energy sources, as the economic incentive to do increases.

What Hope Is There for Solving the Crisis of Global Sustainability?

The problem with addressing many of the global sustainability problems, such as global warming, is that by the time it is evident that a crisis is upon us, it will likely be far too late to address the crisis effectively. There is a latency period between the time global warming gases are released into the atmosphere and when their effects show up in global temperatures, sea level rise, desertification, and other impacts. Once a crisis, such as global warming, is self-evident to even the most hardened skeptics, and mankind is willing to address the crisis, it will likely continue for many decades or centuries beyond that date, even if dramatic changes are made in short order.

Crisis of Global Sustainability brings important contributions to the debate over global warming that is ongoing at many levels throughout the world. First, the book outlines how international conferences to address global warming have increasingly ignored the input from climate scientists who argue that talk of permitting a four degree Celsius (approximately seven degree Fahrenheit) rise in global temperatures over the pre-industrial average temperature would be disastrous for future generations of mankind and other creatures on Earth. As the book points out, even the more modest target of a two degree Celsius rise, which was the initial target being discussed amongst world leaders, could have very negative impacts in coming years. Second, the book explains something that the mainstream media tends to ignore about projected sea level rise due to global warming. That current mainstream sea level rise projections from scientific organizations, such as the United Nations’ Intergovernmental Panel on Climate Change (IPCC), are extremely conservative, while newer sea level rise projections for the next century are far more dire for coastal inhabitants, if the world warms by two to four degrees Celsius. The book also points out that the latest (2007) IPCC report left out important contributing factors to global warming, such as the release of global warming gases from thawing tundra.

About the Author of Crisis of Global Sustainability

Tapio Kanninen is Senior Research Fellow at the Ralph Bunche Institute for International Studies (RBIIS) at the Graduate Center of the City University of New York and a Co-Director of the Project on Sustainable Global Governance at RBIIS. Mr. Kanninen has served as a long time United Nations staff member as Chief of the Policy and Planning Unit in the Department of Political Affairs (1998-2005), Head of the Secretariat of Kofi Annan’s five Summits with Regional Organizations, and as part of a project at the United Nations Statistical Office that focused on establishing a global framework for environmental statistics.

Crisis of Global Sustainability can be purchased via the Amazon link provided below. 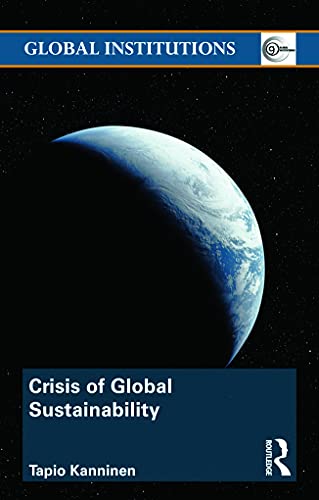