How the Crow Nation Received its Name

Crow Nation, or Crow Tribe as they call themselves, arrived at their English name humorously.

The white settlers who met the Crow mistook the indigenous nation's translation of their own name, Children of the Large-Beaked Bird , to mean children of the crow. The name stuck.

(Reference: Children of the Large Beaked Bird: History and Culture of the Crow Nation. Jerry Bauck. 1993).

Crow Nation fought with the US Cavalry and Lt. Col. George Armstrong Custer against other Native nations - notably the Lakota Sioux and allies, because this was the Great Sioux War of 1876.

The Little Bighorn was a largely one-sided massacre of the US 7th Calvary and Custer Battlion (outnumbered by estimates from 3 to 1 up to 9 to 1) and their allies, but the event is commemorated by a national parks installation at Little Bighorn National Monument and Custer National Cemetery (see links below). George Custer's grave, along with those of many of his men, can be visited in the Montana prairie.

Apsáalooke Nation is the Crow Tribe at Crow Agency, Montana and their motto is Peace Though Unity, a motto that raises some eyebrows in the light of the historic massacre. However, the children of the big-beaked bird have a beautiful origin. The US was born in war and has lived very few years without internal or external warring.

Triune History of the Crow

The people of the Apsáalooke recognize and teach three periods of cultural development since the year 0 AD.

Crow Tribe settled in Montana centuries ago. The people say that they were first the Awaakiiwilaxpaake or People of the Earth, at peace with all humans and wildlife in the time when the birds and animals could still speak. The Crow next developed through time into a second phase, Biiluke on Our Side, and finally, the Awashe, People of Earthen Lodges.

As Biiluke, the people were told by their Creator that He would not make many of them. As the more developed Awashe, some of the people went in quest across the North American Plains to seek the Sacred Tobacco Plant. Gathering from what became Canada and the American western plains, they settled in the Little Bighorn Mountains of Mountana near a spot that legend tells us that their sacred plant was found. Here, they became Apsáalooke Nation of the Crow. It is a lovely, peaceful history.

Many North American Natives maintain oral histories that discuss several thousand years of culture and belief. The Crow Tribe does not speak on its website of multiple thousands of years, but only of 2,000 years history.

The US Federal Government signed a treaty with this Indigenous Group to recognize them officially as a tribe or nation in 1825. An 1851 treaty established the Crow Reservation in Montana and a final treaty of 1868 established additional rights and responsibilities after the American Civil War. Unfortunately, archaeological discoveries in Autumn 2011 found that a March 1880 federal document forced the Crow onto a smaller reservation in order for whites to settle a greater percentage of Montana's lands (Source: www.nytimes.com/2011/09/11/us/11tribe.html).

The Crow had previously allied themselves with US Cavalry leader George Custer against the Sioux and Northern Cheyenne in 1876 in the Battle of the Little Bighorn, just 100 miles east of the reservation lands that were lost. The Crow were seemingly penalized with land confiscation instead of rewarded for their loyalty.

The Crow Agency reservation today lies on 2.2 million acres and includes the Big Horn Mountains, given to the Crow by a legendary Seven Big Horn Sheep with golden horns and hooves. The Big and Little Bighorn Rivers run through the reserve, while two additional mountain ranges and several national park installations fill it with an incredible landscape. 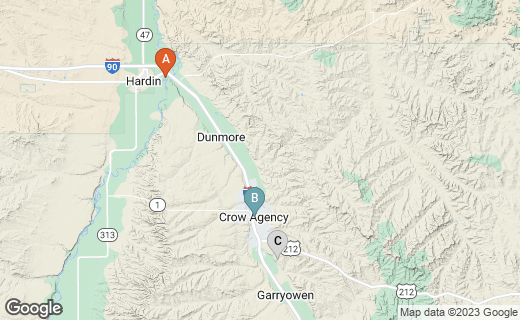 Changes Under the Obama Administration

President Barack Obama was adopted into the Crow Tribe in the late 2000s.

The Great Recession of 2008 - 2010 affected the reservation as it affected much of the rest of the US. Fewer jobs were listed from Autumn 2009 - Autumn 2011 and health declined in some respects during the recession and its aftermath.

However, a big improvement was achieved in water irrigation rights with a $74,000,000 federal award for ten years' development in the Crow Irrigation Project and its new jobs creation 2011 - 2021. Jobs doubled from September 2011 to September 201

One health aspect in decline among the Crow is nutrition and obesity. In fact, eating disorders have been a little discussed problem, especially among Native woman. As the population increases and health news and notices of healthare advances spread more quickly in a technological age, problems and conditions some into a brighter light.

Recent reports reveal that Binge Eating Disorder (BED) is a particular problem and that Native women are at higher risk for BED than white women (reference: http://indiancountrytodaymedianetwork.com/2011/10/turning-a-blind-eye-to-eating-disorders). However, resources to help within the Indian Health Service are inadequate for these types of conditions. National eating disorder associations are being consulted for help.

Significant Population Growth On and Off the Reservation