Estonia: Leading the Way in e-Government

Estonia, a small nation of only 1.4 million in the far northeast of Europe between the Baltic Sea and Russia, gained its independence from Russia in August 1991. After more than 50 years of occupation by the Germans and Soviets, Estonia's infrastructure lagged far behind most other Western nations. Only half the population had a phone line. From those humble beginnings, Estonia established the first e-government (electronic government, AKA digital government, online government) in Europe.

42 Services Managed Mainly Through the Internet

Today, Wi-Fi is nearly everywhere in Estonia-- you could walk 100 miles and always have an Internet connection-- and it is free. In 2011, 94% of taxes were done online-- usually within five minutes. Cabinet meetings are paperless. Prescriptions are issued electronically. In the larger cities, you can pay for bus tickets and parking by texting-- you can even text for your beer in some establishments. You can sign legal documents from your smart phone. You can vote from your laptop. President Toomas Ilves voted in the last election, presumably for himself, while he was visiting Macedonia. Ninety-nine percent of bank transactions are online. It is possible to start a business in a few hours by logging onto a government web site and filling out a form.

An important facilitator of all this capability is the ID card, which 90% of Estonians have. Using this card, they can vote, transfer money, use it as a bus ticket, pick up pharmaceuticals and access all the data the state has on them. Data is not recorded on the card itself; each user must type in their code to use it.

After being watched by the KGB for so long, why aren't Estonians afraid of “Big Brother” watching them? Many Estonians feel it is the other way around-- the system lets them keep an eye on the state. This is because every Estonian has the right to see who has looked at their data. Every time someone's files are accessed, a flag is attached describing exactly who looked at what and when they looked and that person can be challenged. For example, a police woman was caught accessing her boyfriend's data and a candidate who accessed personal information about voters was punished. 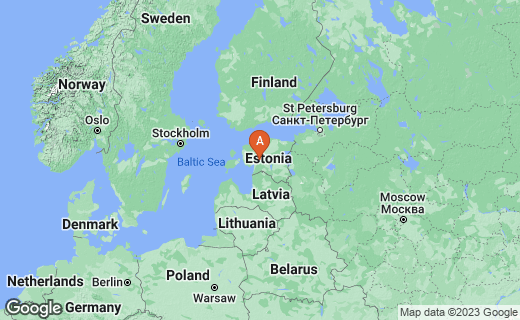 For its size, Estonia has a lot of start-ups, especially in the IT-Internet arena. One reason is the aforementioned ease of registering-- there is little red tape. Another reason is, there are a lot of computer-savvy people in Estonia. This is also not by accident. Already in 1997, in a campaign led by now-President Ilves, 97% of Estonian schools had access to the Internet. So, those with ideas could start a company, develop their product and either expand or sell their company. Many foreign companies saw the advantage of tapping this power.

The best known start-up is Skype-- the Internet phone company, developed by four Estonians. It was sold to eBay in 2005 for $2.6 billion. Microsoft is set to pay up $8.5 billion for Skype, which now has about 400 million users, and will open an office in Estonia.

Other start-ups include Kazaa, Playtech and Fits.me. Kazaa introduced in 2001, is an early peer-to-peer file sharing application, usually used to share MP3 music files. Playtech is an online gambling software company. Fits.me is a company that supplies robotic mannequins to online clothing sites. Customers enter their measurements, which are fed into the robots and the customers can then see how the clothing they have selected will actually fit over the Internet.

How Did This All Happen?

When the Estonians broke free of Russia, they realized their dilemma. They were a tiny country, with lousy infrastructure, few resources, right next door to a huge country with a grudge and basically starting from scratch. Fortunately, their leaders were young and computer-savvy. They realized the Internet could be leveraged to make up for many of their shortcomings. They realized that all the Russians had to do was take down the TV tower, the newspaper and the central radio station and Estonia would be cut off from the world. However, the Internet would be much harder to control, so they decided to build their government around the Internet, instead of of simply tacking on services like most other established countries have done.

Ironic Twist and the Birth of the Cyber Defense League

However, after they insulted the Russians in 2007 by moving a Soviet war memorial from the center of Tallinn to the outskirts of the city, Estonia suffered a “cybersiege”, allegedly from Russia, that, ironically, used the Internet to disrupt the whole country. It must be noted that about 25% of Estonia's population are Russians and this leads to much internal tension as well. In order to combat the attacks, Estonia restricted traffic into and out of the country. Though the world could not “see” what was happening inside the country, Estonians were able to conduct business internally. After three weeks, the attacks stopped. From that lesson, which the Estonians took very seriously, they were soon in the forefront of global cyber warfare. Where other countries have soldiers, like the US National Guard, that give a weekend service per month, Estonia has its Cyber Defense League-- volunteers from banks, software companies, etc who give one day a week to cyber issues.

In order to maintain the integrity of its e-government, Estonian's will have to constantly watch for its erosion from within (government officials seeking to curtail freedoms or favor powerful interests) and without (particularly corporations and business leaders taking advantage of privatization efforts to cut costs). This will be no small feat; it will be worth keeping an eye Estonia's experiment.