Doublespeak: From Revenue Enhancement to Terminal Living : How Government, Business, Advertisers, and Others Use Language to Deceive You
Buy Now

A Dictionary of Political Double Speak

The other day I was reading a hub about teachable moments and politics. It was one of the many great examples of political jargon. It got me thinking about what politicians say and what they actually mean.

There's an old joke that goes something like this,

How do you know a politician is lying?

His lips are moving.

I still think that joke is hilarious. If it weren't so true it wouldn't be so funny. (See below how people make money selling products making jokes about politicians and tell me it isn't kind of true!)

Anyway, that hub got me thinking that there should be some sort of dictionary so we normal people can translate what the politicians really mean. There's all these terms that sound wonderful but mean nothing or don't mean what they sound like they mean or who knows what they mean. It is all nuanced doublespeak.

Now whenever someone puts the word nuanced in a sentence it is meant to be condescending. More on that later but basically it is the politicians saying I'm smarter than all you dumb voters...but back to political jargon.

Why Do Politicians Doublespeak?

With all the jokes and examples of political jargon floating around, you would think that that politicians would get wise to the fact that everyone knows they don't say what they mean yet it continues. So why do politicians lie? I have 2 theories and I'm pretty sure it covers about 95% of the politicians.

Theory #1 - They have to lie or double talk because if they told us the truth nobody would ever vote for them. I'd say this applies to about 1/2 of the politicians out there. They are bread by handlers how to say things in a nuanced fashion so as to say as much as possible about what they are for without actually saying what they really believe. One example of this tactic is to triangulate on an issue so you are covered on both sides.

Here's an example of political double speak we all remember, "I Actually Did Vote for the $87 Billion, Before I voted Against It". Remember that one. Only a politician can affirm that they can vote for something before they vote against it and think it was the right position to be both for and against the same thing!

Theory #2 - The culture of Gotcha media. I think there is a second class of politicians who have to be very careful about what they say because of the saturation of media is looking for that gotcha soundbite or clip. If you say something the wrong way or mis-speak, it ends up on YouTube, all over cable and on the late night comedy shows.

Politicians don't want that kind of attention. One recent example would be Rand Paul on the Rachel Maddow show regarding her hypothetical question about Civil Rights Legislation from 40 years ago. Clearly a gotcha question. An interviewer who wants to trap someone can take any sensitive issue and turn it into a gotcha question by making up some hypothetical which may or may not be relevant to the question. It happens on the left and the right of the political spectrum but probably happens more to candidates on the right because the media is left leaning.

From the day they announce their candidacy, these politicians now have professional handlers to tune them into these types of questions and steer clear of any missteps. Another part of this is the whole industry of political correctness that has taken the artful turn of a phrase and turned it bland, colorless and full of nuanced nothingness because of gotcha journalism, political correctness and the readiness of political advocacy groups looking for opportunities to be offended and outraged.

Roots of double speak can be traced back to George Orwell's'1984, where the government changed the form and meaning of a word to suit there own purpose...which is exactly what is happening now. It comes in the forms of euphemisms, double speak, insider jargon and more. Here are some current examples of words, phrases and jargon speak used by politician and what a normal person should interpret the meaning as....

Teachable Moment - Used to describe a situation where a politician makes a mistake and tries to confess without admitting guilt.

Actual Translation, 'Oops we screwed up. Here's what you should learn from this screw up.'

Pivot - a pivot in political speak is the point at which a politician changes their views to meet a political purpose. Usually happens after a primary when the politician will run hard to one extreme then 'pivot' back to the center to capture the general electorate.

Actual Translation,'I was just saying that to get elected. Here's what I really believe.'

Actual Translation, 'I need to be on both sides of this issue so I am going to take back what I said earlier so I can say something else now.'

Bailout - This is the process of helping out large corporations with money until it can be repaid by the company.

Actual Translation, 'In return for this loan we are taking an equity position in your company even if you pay back all the money, we are now part owners.' Of course the ramifications of this are that the government that can pass laws that effect companies now owns one of these companies. Now private companies must compete with the very same entity that passes laws that govern how that company can do business, pay taxes, etc. Not a good thing.

Reform - Changing the law to ostensibly improve something or correct wrongs of the past. Think health care reform, financial reform, campaign finance reform, immigration reform... the list goes on.

Actual Translation - 'The government is going to take this over so we can control it and decide who gets what and how much of it. We need to add more regulation and complicate it more so only a bureaucrat can understand it and you need an accountant or lawyer to figure it out. ' Nothing the government 'reforms' actually gets simpler or better, it just gets regulated more.

Citizen - Person who lives in a country or region.

Public Servant - One who's job it is to serve the public. Usually in reference to an elected politician.

Actual Translation - 'Fooled you into electing me so now I can do what I really wanted to do all along.' Okay, that's a little sarcastic but it is closer to the truth than it may sound. Name one politician that serves their constituency and not their political party. The list is very short. Once a politician gets elected, they become focused on getting re-elected so they can maintain their power. Very few actually serve their public and I'll leave it at that.

Working Class - The group of people who do work for a living.

Actual Translation - 'Those people being exploited by the rich that need the government to come in and tax the rich so they can make it fair.'

Those are just a few of the jargon double speak euphemisms I've come up with for this article. I'd welcome more as I'm sure I just touched the surface. Sadly, our language is being taken over by forces like political correctness, progressiveness, media consultants and political handlers. Gone are the days when a politician can say what's really on their mind whether conservative or liberal.

Think of all the words spoken by intelligent people and the simplicity of what was said where it took torturous twisting of words to change the meaning.

Lincoln's Gettysburg Address'Four score and seven years ago, our fathers brought forth upon this continent a new nation: conceived in liberty, and dedicated to the proposition that all men are created equal...'

Think Jefferson and the Declaration of Independence - ,'We hold these truths to be self-evident, that all men are created equal, that they are endowed by their Creator with certain unalienable Rights, that among these are Life, Liberty and the pursuit of Happiness. --That to secure these rights, Governments are instituted among Men, deriving their just powers from the consent of the governed'

And best of all, think Jesus, 'Love one another as I have loved you.'

All said in relatively few words exactly what they were trying to say. Nobody can misinterpret what they are trying to say. Their words are simple and plain but their meanings are rich and deep. No tortured double speak trying not to offend anyone and placate everyone.

In the end, the ones who end up paying are the honest people trying to make good choices about the future of their country. When the lines are blurred by language, deception creeps in and we get what we have today. I'll leave it to the reader to decide if that is a good thing. 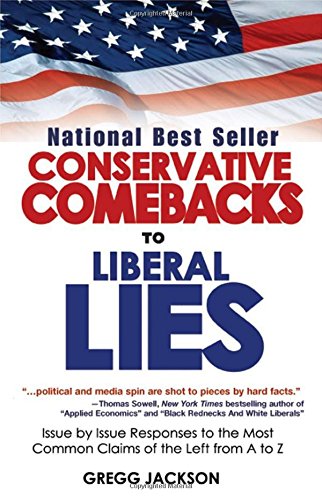 Conservative Comebacks to Liberal Lies: Issue by Issue Responses to the Most Common Claims of the Left from A to Z
Buy Now

More Articles on US Politics