Every time a “Not Enlightened Like Us” candidate like Donald Trump wins the Presidency the whole whiny Hollywood herd starts packing their Kenneth Cole and Diane Von Furstenberg coordinated fashion bags for a move to another country.

In 2000 A-List Luminaries like Robert Altman, Alec Baldwin and Elton John promised to go into self-exile if George W. Bush won. Declared movers and shakers (moving because they were shaking in their boots) following Bush’s 2004 re-election included Robert Altman (again), Alec Baldwin (again, although he later denied it this time) and Johnny Depp.

The Internet (or is it The Matrix?) is full of these stories. The people at frank151.com compiled a whole set of flashy Photoshopped PR pix, filmgrabs and paparazzi shots of potential expat Celebrities, Barely Celebrities, Wannabe Celebrities and Not Even Celebrities, created a clickbait slideshow and captioned them with the luminaries’ own political pronouncements under the heading...

The first problem is that there are not 23 celebrities in the slideshow, there are 48.

Second, many had no comment of any kind. Online ads appeared where their comments should have been. So maybe their photos were added for padding; the more times a celebrity-gawper hits the slideshow NEXT button the more page hits the site gets meaning the more money they can charge for their grossly annoying banner, flyover, popup, popunder, autosound, cross-app, animated, video and flashing autoplay ads.

So after discounting the 11 supposed anti-Trumpers like Lady Gaga, Lindsay Lohan, Matt Damon and the lesser lights with no comments only 37 belong in the slideshow.

But third, only 27 Fame Game folks were actually quoted as saying they would move out of the country, or move anywhere.

Since the liberal left loves to categorize people it was initially hoped that the comments of these star-studded practitioners of politics could be gathered into various categories such as No Comment, Unclear, Airheady, Nasty and Definitely Moving. Unfortunately, the vast majority of these Spotlighters manage to qualify for multiple categories in a single sentence or two.

So let’s start with the Definitely Moving crowd (all quotes are fair use).

Just where are the Beautiful People off to now that Trump is the President-Elect? Canada seems to be the favorite destination. It’s seen as a socialist utopia after all. Keegan-Michael Key because “It’s easy: It’s like 10 minutes from Detroit and that’s where I’m from.” Neve Campbell is headed to the Great White North as well. Chloë Sevigny was very specific: “Nova Scotia.”

Raven Symoné put herself into the Moving and the Airhead categories when she said on The View, “My confession for this election is if any Republican gets nominated, I’m going to move to Canada with my entire family. I already have my ticket.” Note she said “nominated,” not “elected.” Since Republicans always nominate someone it should be assumed that Symoné has been comfortably settled in Canada for months now.

Barbra Streisand wasn’t quite so certain. “I’m either coming to your country if you’ll let me in” she told an Australian journalist, “or Canada” If they will let her in.

Other refugee possibilities are:

New Zealand: Ruth Bader Ginsburg (no, not a famous film femme but the Bill Clinton Supreme Court appointee) moans, “I can’t imagine what the country would be with Donald Trump as our president” and apparently isn’t sticking around to find out. Maybe the Kiwis need a supreme anti-Trump adjudicator.

France: Bill Maher made the Moving, Airhead and Nasty categories with his “I’d vote for Dead Hillary in this race. She could be Patient Zero for Bubonic Plague, still better than #TangerineNightmare. Next stop France!”

Running Away From Home

Australia: Ali Wentworth says, “If Trump wins, we’ll start looking at real estate in Sydney, Australia.” She can join Babs if the Aussies let either of them in. “No crime, no guns” Wentworth adds. So, another Progressive Utopia.

Italy: “I’ll move from Denver to Italy.” So says Omari Hardwick. What will he do about his acting career, text it in?

Jupiter: Cher made the Move and Airheady categories by tweeting in all caps, “IF HE WERE TO BE ELECTED, IM MOVING TO JUPITER.” It’s rumored that CETI picked up a transmission from that planet: “If Cher is moving here we’re all moving to Saturn.”

Spain: Amy Schumer vowed, “I will need to learn to speak Spanish because I will move to Spain or somewhere.” That “somewhere” sounds indecisive. Maybe she should learn Jupiterese and move to Jupiter with Cher.

Many others said they would definitely move if Trump won. Trump won. Anyone want to take bets that any of these simpering celebs have actually emigrated or are they just posturing for each other? 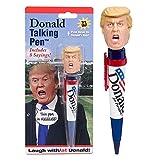 Donald Talking Pen - Funny Donald Trump Gifts - Says 8 Different Sayings in Trump's REAL Voice - Great Trump Gag Gifts - Trump Doll Talking Pen - Gifts for Men - Best Trump Pen
YOUR LIBERTARIAN OPINIONIZER'S PICK: An eminently appropriate totem for those Clintonian expatriates around the world that may need a handy reminder of just why they fled their homeland. Also makes the perfect gift for triumphant Trump fellow-travelers who can’t get enough of their hero. And libertarians can outrage Trumpers and Clintonians alike by giving these out to everyone they know. (Also recommended: the Hillary Cackling Laughing Pen)
Buy Now

Here are the Frank151 slideshow’s Entertainment Elites who haven’t already been mentioned in the Move categorey but have left us a legacy of Airheady, Nasty and Unclear opinions on Trump.

Miley Cyrus declared “My heart is broken into a 100000 pieces…I am moving if this is my president! I don’t say things I don’t mean!” So Cyrus makes the Airheady column for being heartbroken over an election result, in the Move group since she has obviously already moved because she means it, and the Unclear Category because she doesn’t say where she’s moving to.

Al Sharpton is already an expat if he kept his promise after saying “If Donald Trump is the nominee, I’m open to support anyone, while I’m also reserving my ticket out of here if he wins.” He’s already the nominee, Al. Send us a post card from your new country.

Airheady or Nasty? Rashida Jones reminds us that Trump was endorsed by – but didn’t endorse – the KKK while ignoring that Hillary praised “My friend and mentor” former Klan leader Sen. Robert C. Byrd. Maybe she needs her own Hypocrisy category.

Rosie O’Donnell apparently threatened to leave the country but then tweeted in ALL CAPS to “WASTED TRUMPERS” that “HE WILL NEVER BE PRESIDENT.” So, is she leaving now?

Shakira said of Trump, “No one living in this century should stand behind so much ignorance.” So does that mean ignorance was okay for the last century or will be okay for the next century, or what?

Jon Stewart: “I would consider getting in a rocket and going to another planet, because clearly this planet’s gone bonkers.” Note to Jon: Stay away from Jupiter and Saturn as you won’t be welcome there. But Uranus might be an appropriately named destination for you.

Strictly Unclear, Katy Perry simply tweets “MOVE.” She doesn’t say where. Same for Whoopi Goldberg: “I don’t want it to be America. Maybe it’s time for me to move, you know.” And then there’s NeYo. “Me and Drake gonna be neighbors if Donald Trump becomes president.” All very Unclear. Who is NeYo? Who is Drake? And where does Drake live? Drake isn’t in the slideshow so we don’t know.

Jennifer Lawrence declared that if Donald Trump became President the world would simply end. So maybe moving to Jupiter is her only option.

Gabrielle Union just rants without really saying anything, like she didn’t have a script: “I am scared. I will fight. Trump will not crush my spirit. Hope fuels the fire in my belly to seek the change I want to see in this country.” Harry Potter author J.K Rowling also rants irrationally from England: “We stand together. We stick up for the vulnerable. We challenge bigots. We don’t let hate speech become normalised. We hold the line.”

Spike Lee’s comment is either Unclear or Levelheaded, stating that he’ll be “moving back to the republic of Brooklyn, New York.” Most Fly-Over Country conservatives would agree that that’s moving to another country.

And some just make the Nasty category by spouting profanities. Kanye West responded with “We’ve got enough money to buy our own island or some sh*t. I’ll be damned if I raise my daughter around ignorance and flat-out blatant racism” Ah, but he will raise her around profanity. Same for Ariel Winter: “America, you have failed. What the actual f*ck. Devastating. I won’t recognize @realDonaldTrump as our president, ever.”

But then there’s this one Unexpectedly Uncategorizable Comment. Katie Hopkins tweeted “If Donald Trump wins the race to the White House I’m moving to America.” Wait! What? Moving to instead of from America? Who is this person who says she will move in the wrong direction because Trump won? Turns out Katie Hopkins is an English television personality and newspaper columnist. To most libertarians this is just as amusing and puzzling as all those who want to move out.

Libertarians Moving Out of Trump America?

Some self-styled Libertarians of the “Big L” political mindset actually did vote for Trump, meaning that most ideologically driven libertarians would place them in the categories of Airheady, Nasty and Should Move.

But a lot of politically inclined “Big L” Libertarian-leaning Republicans also moved because of Trump’s win. Redstate.com ran this headline on its website back on May 4, 2016: “BYE GOP: Libertarian Party Registrations DOUBLE In Mass Exodus After Trump Win.” This blurb in their article explains why:

“In the hours after the polls closed in Indiana and it was announced that businessman Donald Trump had won the Republican presidential primary — thereby ending Texas Sen. Ted Cruz’s campaign — the Libertarian Party saw a doubling of its new membership applications.”

As for the self-loving liberal crowd featured in the slideshow just remember that all of these celebrities move in the same loving caring sharing inclusive accepting circles that don’t love care share include accept anyone other than identical knee-jerk clones of themselves.

Libertarians can only wonder just how narcissistic these people have to be to imagine that anyone out here in the real world actually cares what they think about politics or where they move to or why.