American Economy: Why Fannie Mae and Freddie Mac Are Not Responsible for the Economic Financial Crisis. [46]

My Esoteric spent 20+ years as a DoD Cost and Economic Analyst as well as a program manager of the Air Force Total Cost of Ownership MIS.

More than one Hubber has made comments on my hubs or on other hubs or have written their own hubs laying the blame for the 2008 US economic catastrophe on three components. According to many Social Dominators and their Right-wing Authoritarian followers, but for these three boogie-men, we would have just had a mild recession. Who are these dastardly villains set on America's destruction? They are the Government-sponsored Enterprises (GSEs - Freddie Mac and Fannie Mae), the Housing and Urban Development Community Reinvestment Act (CRA), and, the most villainous of them all, Representative Barney Franks, D-NY.

What the Conservatives Think Caused The Financial Meltdown

THE Conservative theory is most recently presented by Mr. Peter J. Wallison, a member of the "National Commission on the Causes of the Financial and Economic Crisis in the United States" (NCCFECUS) who wrote a dissenting opinion to the finding of the majority of the Commissioners in the "The Financial Crisis Inquiry Report" (FCIR), February 2011. To quote Mr. Wallison,

"There are always many factors that could have caused an historical event; the difficult task is to discern which, among a welter of possible causes, were the significant ones - ones without which history would have been different. Using this standard, I believe that the sine qua non of the financial crisis was U.S. government housing policy, which led to the creation of 27 million sub-prime and other risky loans - half of all mortgages in the United States - which were ready to default as soon as the massive 1977-2007 housing bubble began to deflate. If the U.S. government had not chosen this policy path - fostering growth of a bubble of unprecedented size and an equally unprecedented number of weak and high risk residential mortgages -the great financial crisis of 2008 would never had occurred."

This is what we have been hearing from Conservatives since January 2009 and the Tea Partiers since their inception. They don't ignore the other ingredients:

But, he does give them short shrift. The most curious statement Mr. Wallison made in dismissing these other reasons was for Predatory Lending, he said,

"This undoubtedly occurred (predatory lending), but it also appears that many people who received high-risk loans were predatory borrowers, or engaged in mortgage fraud, because they took advantage of low mortgage underwriting standards to benefit from mortgages they knew they could not pay unless rising housing prices enabled them to sell or refinance."

In the nine pages he was allowed for his dissent in the FCIR, Mr. Wallison spends six paragraphs explaining his reasoning why the GSEs and CRA are the true cause and one paragraph each to why the rest of the reasons combined would not have caused the great recession. He then spends seven more paragraphs complaining about the process the commission used to reach its conclusions and how it excluded the commissioners, including him, from the process. If true, then their certainly were flaws but, I have my doubts. Since I have just begun the 500 pages, it will be a bit before I really know.

Those are the broad statements of fact supporting their position. Mr. Wallison promises more detail behind the numbers in his quote in his full dissenting opinion that you can find at this FCIC link. I took a bit of time to read through some of his more detailed analysis to get the thrust of it. He does present a lot of facts and figures, primarily derived by his conservative "American Enterprise Institute" think tank colleague Edward Pinto, who, at one time, was a former chief credit officer at Fannie Mae.

Mr. Wallison's fundamental points are three-fold: 1) the government's 1990s policy to increase home ownership among the low and middle income Americans with below median income levels 2) drove the GSEs to lower the underwriting standards and make 27 million sub-prime and Alt-A loans which became the foundation of the 2000 - 2007 housing bubble, and 3) that non-GSE banks were forced to make sub-prime mortgages to be in compliance with the CRA that overwhelmed the number on non-GSE/CRA related mortgages in the system. As a consequence, it is clear that but for these actions by the government, there would not have been a financial crisis.

Most of the data supported their claim that the GSE's controlled the sub-prime market prior to 2000, which is probably true. Data was also presented relative to the financial activities of the GSEs, HUD, and FHA for after 2000, but not for the non-government institutions. Without comparative information, my 25 years experience as a government cost analyst tells me you can't draw any meaningful conclusions for the period between 2000 - 2008.

I can stop at this point because the Conservative reasoning and logic is complete; Fannie Mae, Freddie Mac, the government housing policy ... as simple as that. Oh yeah, and Congressman Barney Frank, former chairman of the House Finance Service Committee, apparently single handily orchestrated the whole affair even though the Conservatives controlled Congress from 1994 until 2006.

THERE has been a lot of finger pointing as to who or what was really at fault for the epic financial disaster that America visited upon itself and the world. I have my favorite theories, which I think are well founded and well supported by facts. In brief, I lay the fundamental reason for the economic meltdown at the doorstep of the Conservative economic philosophy of laissez-faire meaning as little regulation of business practices as humanly possible. But for the successful application of this philosophy over the last 4 decades, the cratering of our economy we just experienced would not have happened. That, however, is not what this article is about and will have to wait until another time.

What I really want to discuss in this hub is part of the results of the just released "Financial Crisis Inquiry Report " from the "National Commission on the Causes of the Financial and Economic Crisis in the United States ". One of the subjects the commission looked at very closely in the investigation that resulted in this report, was what role did Fannie Mae and Freddie Mac have in causing or exacerbating the 2007 - 2008 financial crises. This, of course, is of particular interest because the Conservatives claim they ARE the reason, the only reason, for the crisis. In fact, one Commissioner, Mr. Peter Wallison, wrote a dissenting opinion trying to prove just this point.

Fannie Mae and Freddie Mac are private organizations, called Government-sponsored Enterprises (GSE), and were established by the federal government to do three things:

Fannie Mae was created in 1938 as a federal agency and then, in 1968, chartered as a private, shareholder-owned company to provide the same services Freddie Mac was chartered by Congress in 1970 for essentially the same purpose. Neither make mortgages directly but provide a secondary market for them.

For many years, both Freddie Mac and Fannie Mae did an admiral job of fullfilling their role in keeping the mortgage markets stable. The GSEs, did, as the Conservatives claim, had an obligation to make part of their mortgage portfolio available for low and middle income homeowners and yes, they did acquire sub-prime and Alt-A, non-traditional mortgages (NTMs). However, even though the underwriting standards were getting lower, they weren't out of hand. But starting in 2000, things began to go terribly wrong, with them and many other major Wall Street financial institutions. As the financial pullback turned into a full-blown rout, recriminations began to fly from all quarters. One of the favorites of the Conservatives, that has resonated with America, is that it was the mismanagement of Fannie Mae and Freddie Mac coupled with the Liberals determination to provide housing, via these organizations and the Community Reinvestment Act (CRA), to low and middle income Americans, read people who couldn't afford them, buyers that was the real culprit. All fingers pointed toward them.

This resonated so much in America that the Commission found it necessary to investigate both the GSEs and the CRA. I haven't written much about these accusations in the past because I didn't have very many facts available to base an analysis on. Now I do. What the Commission found is that the Conservatives charge, which I intuitively knew was going to be the case, was way off the mark, they were misdirecting America away from real evil-doers, the ones truly responsible.

This isn't to say the GSEs get off Scot-free, not by a long-shot, they were as deep into the greed machine as the next guy and deserve some serious jail time along with many others, in my opinion. Okay, then why weren't they solely responsible like the Conservatives said? They controlled most of the secondary mortgage market didn't they? Well, no, not really, not of the sub-prime market where the vast majority of the toxic mortgages were. The real TRUTH is that Fannie Mae and Freddie Mac, contrary to what Mr. Wallison claims and once Wall Street got into the act, at their worst owned only 40% of the sub-prime market, that was in 2004. By 2008, they were down to 28%. Further, those that the GSEs did own were of better quality than those that Wall Street owned! The Commission found that by 2008, when comparing a subset of borrowers with credit scores of 660 or lower, the non-GSE institutions were suffering an astounding 28% serious delinquency rate while the Freddie Mac and Fannie Mae were facing a much more manageable 6%! Doesn't that make you wonder exactly what the Conservatives were looking at to base their accusations on? This is the comparative analysis that suggested was missing in Mr. Wallison's dissent.

The Conservatives also claimed that in conjunction with the GSE, the Liberal programs of getting low income people into home ownership was also responsible for the financial crisis. Once again, the Conservatives have the numbers against them, once again the Conservatives are wrong. These low and middle income programs come under an initiative called the Community Reinvestment Act of 1977 that was designed to prevent discrimination by "redlining" by banks; something the Conservatives deny was happening and even if it was, it shouldn't be regulated by the government. The statistic that stops the Conservatives in their tracks here is that only 6% of the sub-prime mortgages had any connection to this Act. Again, this is in complete disagreement with what Mr. Wallison tells us the Conservatives believe is the truth. His problem again is that there was no comparative data presented to substantiate his position that I could find.

Democrats and other concerned citizens need to take the responsibility to respond with these simple facts, now that they are available, whenever and where ever Conservatives try to snow America with unsupported claims that try to take the blame away from where people ought to be looking, the Conservative economic philosophy. It was this philosophy that sunk us in 1929 and it was this philosophy that I feel was responsible for 2007. As I work through my Hub on recessions, I may find more where economic doctrine of laissez-faire is at the root of financial collapse in America. 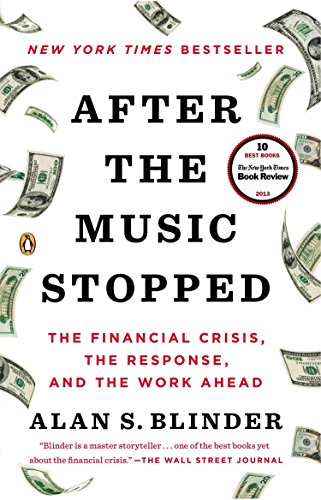 After the Music Stopped: The Financial Crisis, the Response, and the Work Ahead
Buy Now