This is a relatively new term that many people have not heard of. As a matter of fact most people that are victims of this kind of stalking are deemed mentally unstable due to the improbability and invisibility of the crime.

It is a crime perpetrated by many people rather than one and these people are careful not to get caught. Unlike one on one stalking where the stalker doesn't worry about getting caught because of his/her obsession and the victim can more easily identify the stalker, one on one stalking often involves email and internet communications, offline connections such as following the victim, driving by the victims house, contacting the victim at work and contacting family members and friends. The victim can more easily keep a record of all these communications and therefore alert police who in turn can trace communications of all internet communications. Essentially it's easier to track a one on one stalker down unless he's very good at hiding and not getting caught.

Unfortunately, gangstalking involves a much more intricate web of deceit and following and harassing the victim and therefore is much more difficult to pin down and make the persons responsible legally pay for their crime.

Gangstalking goes by a number of names such as organized stalking, cause stalking, multiple stalking, vigilante stalking, mobbing(community mobbing), organized harassment and several others.

There are many types of stalkers but the gangstalker is the most ruthless.

In gangstalking people are referred to as targeted individuals not victims but make no mistake the people targeted by these groups of people are victims.

This is a different form of stalking and only one I'd read about. I've been a victim of one on one stalking but thankfully never this type.

Something that alerted me to this was doing research on cyber stalking then my husband started experiencing some oddities that I will go into a little more deeply.

Before I begin let me say I do not believe my husband to be crazy but I believe anyone being followed and harassed can become over sensitive to everyday stimuli and that stimuli that is not part of the stalking effort can then look like it is even when it's not.

Before I start let me tell you I was ready and in fact threatened him with a mental institution. I thought he was suffering from some type of delusional disorder and it's still hard to wrap my head around and still haven't completely abandoned the delusional diagnosis however due to my own alertness have come closer to what he is talking about.

I was out on the road with my job as I frequently am and he started relaying these odd stories. The most strange was hearing noises in the house, noises that weren't coming from the pets, TV or anything else in the house. We had already had trouble with someone shining a red laser light at our house so our dog would bark all night(this of course could have been kids although there is only one small boy in our neighborhood). It continued(the light instance) for awhile until it got cold.

My husband started complaining that he believed he was being followed even into the stores he frequented, he would overhear conversations that related to him, he observed vehicles parking on an easement behind our house that isn't in use, posts he'd made on his facebook account would change. Someone hacked into my email account and sent him a message containing a virus/spyware. A long time friend thousands of miles away told him he was being spied upon and there was a voyueristic website on my husband. Personally, I thought his friend was a whackjob and gave no credibility to what he was saying. I figured he was just saying that to screw with his head. Then a couple of people at the drugstore he frequents(and are now friends of his on facebook) said there was a website about him. I figured these people were doing the same and playing games.

A little before all this started happening we had hired a neighbor(a young man in his mid twenties who lives with his parents) to do some work around our house, walk our dog, etc. On occasion he would ask to borrow one of my cars. This was something my husband did while I was out of town and not something I would have done. My husband unwittingly left the door key on the keychain with the car keys he let the neighbor borrow. Eventually, I agreed that our door lock should be changed, just in case.

My husband has been barraged with emails that are little more than threats from email addresses he doesn't recognized, his facebook account has been hacked into, my email has been hacked to send my husband an email containing a virus, my ebay and paypal accounts have been hacked. Along with the email address used for ebay. My personal and ebay email addresses are separate. With a little searching the person that hacked my ebay account and email attached to the ebay account actually used the email address to sign up for some of those paid offer sites and even posted on a message board with my email address. He/she also signed up for some of the paid offers and more than likely used someone else's credit card as none of mine were used thankfully. I can't imagine who would do such a thing.

At first I didn't put a lot of stock into it. I just assumed it was coincidence. That's one misconception. If something occurs over and over again and simply doesn't feel normal it probably isn't. I don't know what the mathematical probability for this would be but I'm pretty sure almost daily falls out of the mathematical equation of probability.

There are other incidences or occurrences as well.

I'm still having a hard time with all this. On my last out of town trip(my husband accompanied me) I observed the same vehicle in the same day in an area about 40 miles from where we live. The next day(hubby was not with me) I observed the same two vehicles on the interstate then again a couple of hours later as I was coming home. These coincidences could be completely random but it's a mathematical improbability that it would occur twice right together however possible.

This definition comes from the website stalking tactics exposed at http://www.stalking.tactics.exposed.com/.

Gang stalker is one person of a group of people known as gang-stalkers. Gang stalking employs an enormous amount of people who carry out psychological harassment on a targeted individual. The reasons for gang stalking are many but are brought on by a sociopath. This person for whatever reason seeks to harm the targeted individual. However, they want to evade detection and avoid prosecution so they call on the criminal element to do their dirty work. The criminals who do their dirty work are usually street gangs, cliques, etc,.

Every gangstalking case is different. Some people only experience milder forms where they are just followed while others have their homes broken into and worse. When some move the gangstalking moves with them while for others it stops. If the group doing the stalking feels they are no longer a threat then they will quit. Keep in mind here however that a person doesn't have to be a threat for gangstalking to occur. It can occur simply because you disagreed with a particular group. And it can be any kind of group from a religious group to a hate group to one individual who in an effort to get revenge gets himself a posse going by reporting that the victim is a criminal or child molester. When one person starts the stalking it is called stalking by proxy. The proxy stalker gets puts the ball in motion by doing the above actions and the group(posse) with whom he's interacted carries out the stalking.

This kind of stalking can be carried out for a variety of reasons. A person disagrees with someone or a group, report something illegal, unethical or immoral taking place such as a whistleblower, revenge, money or just plain fun .

Regardless of the reasons and there are no good reasons it is illegal but much harder to prove than one on one stalking because as I stated earlier the evidence is much harder to get and is carried out by a number of people. It's often done in subtle ways and under the radar by many people sometimes dozens, sometimes hundreds if the group can illicit that many for their gangstalking activities. Many of the people carrying out the stalking believe what they've been told about the victim. Many never think for themselves to do their own research and find out if the person is as bad as they are purported to be. Regardless, it doesn't matter. It's still illegal.

As with regular stalking always keep a journal of all occurrences which include dates, times, locations and any other pertinent information such as descriptions of individuals, make and model of vehicles, tag numbers if you are able to get them. Keep a record of all occurrences that happen to you even if they sound crazy. If you come home and realize your home has been broken into don't hesitate to report it even if they didn't steal anything. They don't have to steal anything for it to be a crime.

Be alert and most importantly take some time to gather information especially anything that occurs over the internet or on the phone because these leave a trail that will trace right back to the person(s) doing the stalking.

Before running to family and/or friends take some time to get information because group stalking perpetrators will often go to family and friends first and try to make it look like the victim is unstable and needs psychological intervention. Unfortunately, you don't know who you can trust.

You don't want the gangstalkers to think whatever it is they are doing is starting to get to you and run you down because they feed on this.

If you know nothing about this particular crime consider yourself lucky and hope you never do.

So far, as far as I know, very few gangstalkers if any have been apprehended for their crimes. Unfortunately, most police departments don't believe this crime exists or they won't acknowledge it. Either way, the victim is out of luck.

If a victim goes to a police dept and states he/she is hearing voices brought on by a group, etc. he/she will be labelled mentally unstable so it is best to keep that to oneself.

One last tip, if your home is broken into and it happens repeatedly my advice is to get a dog, a big dog, one for protection that you keep indoors while you are there and while you are away. I can't say this will stop them but it provides an obstacle.

I invite anyone going through this type of stalking to leave a comment or contact me directly at my email address which is at the top of my blog. 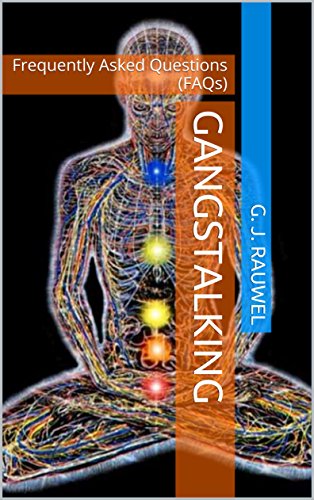