H.O.W. Humanity One World - Put Together a Feed the Hungry Package to Feed One Person at a Time

Marlene knows what it is like to need help. Now, blessed with abundance, she lives a life of sharing and encourages others to do the same.

H.O.W. Humanity One World – Why I Feed the Hungry

When I had no food on my table, I sure would have liked it if someone handed me a package of food. So, now that I have food, I break off a piece of my bread to share it with someone else. There is no sense in two people starving when one person could share and help both people live. Having had the hunger experience, I feel l can no longer walk past people who are hungry and do nothing.

I pack packages of food that I call the “Feed One Hungry” package. Each package that I pack is enough to feed one hungry person. I still live at a level that is classified as poverty, so I can’t do this sort of thing on a grand scale, but I can help one person at a time. What I have, I share. That’s all I’m talking about here.

In addition to providing food, I also include a map to local food pantries.

Read My Other Hub About Humanity

Read my other hub about humanity. The hub is titled, “H.O.W. One World Humanity | How You Can Change the World”, and in this hub I write about how you, being one person, can make a difference one person at a time. I truly believe that if every person helps one other person that the whole world could be changed for the better.

What is the Feed One Hungry Package

Recently I made a comment on a Facebook post by Bill Holland, a wonderful writer friend I met on HubPages. Bill is the founder of H.O.W. Humanity One World and a man with a heart as big as the world he serves. One of Bill's missions in life is for all of us to do what we can to make the world a better place. Visit Bill’s profile page for HubPages and read inspirational stories of hope and humanity.

Bill wrote a post on his Facebook page about the packages that I put together to give out to people who are hungry. His friends responded positively, wanting to know what I put in the packages. Here is my comment to answer their questions.

Think FDA. Nothing should be touched by our bare hand. Everything should be pre-packaged at the manufacturer's. Also, think convenience. With those two thoughts in mind, I pack a protein, a vegetable, a fruit, a carbohydrate, and bottled water. If it comes in a can (like Vienna sausages) the can must have a self-pop lid. Fruit cocktail is great for fruit, granola bars and cheese crackers are filling. I try to make it a full meal, but everything is pre-packaged with food that doesn't require refrigeration (so I can keep it in my car). I don't pack fresh fruits and vegetables because then my bare hands would have touched the food and the Center for Disease Control might want to cite me for that. I buy plastic packs of cutlery that includes the napkins so that my hands don't touch anything people would put in their mouth. Also, remember that the recipient is likely to be homeless, so they won't be able to cook anything. They need to be able to eat the food straight out of the package. I hope this helps.

Cautions When Preparing the Feed One Hungry Package

When I put together my first package to feed a hungry person, I was not aware of the many things I've listed here. But, since I have been preparing packages and handing them out, I have learned a lot.

There are several concerns with allowing people to hand out food. This is not an all-inclusive list, but in most cases, these issues apply.

Yes, folks, there is more to giving out free food than we can imagine. But, the concerns are there. I’m not advocating that you should break the law, but if you are aware of the concerns and you still want to help people, then I say, good for you… very good for you.

The Contents of the Feed One Hungry Package

I try to keep the contents of the Feed One Hungry package simple and inexpensive. All of the food should be food that is quick and easy to eat and food that can be eaten with no or minimal utensils. I include only a spoon because the only thing in my package that requires a utensil is the fruit cups.

Watch Out for Thieves!

Note: Thieves are notorious for seeing something, wanting it, and taking it. So, to avoid attracting thieves who might want to break into my car after seeing the packages of food, I place a cover over the packages.

I only give away one serving of food for two reasons. First, it is important to remember, when a person is living on the streets, they won’t necessarily have a place to store extra food. The second reason is because there is a lot of crime in the streets. I wouldn’t want anyone to get robbed for having a little bag of potato chips in their pocket.

I pack packages ten at a time and place them in a box to keep handy in my car. If the weather is too hot, as it can be in California, I bring the box indoors and when I go out, I just put the box in the back seat.

A Note About Fresh Fruit

In the past I have included fresh fruit like apples and oranges, but now I am more conscientious about sanitation and now I only include things that are pre-packaged at the manufacturer’s plant.

I don’t put everything on the list into one package. That would be too much food for one serving and it would be too costly for me to be able to feed people on a regular basis. I try to keep the cost to about $2.00 (plus or minus).

A typical package that I put together might consist of Vienna sausages, beans, fruit cocktail, cheese and crackers, water, spoon, sanitary hand wipe, and napkin.

My Feed One Hungry Package

The following table is a list of items that I have put into a Feed One Hungry package. This is just a suggestion. You may, of course come up with an entirely different list of items. The cost of each item will vary from store to store. These are prices at the time I created this list. I have provided them here for you to get an idea of how much you could expect for a food package.

Things to Put in a Feed One Hungry Package

Each Feed One Hungry package can vary. Determine your budget and then select a combination of items that fit within your budget. 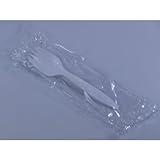 Spork- Individually Wrapped, Disposible (Case of 1000)
A spoon and a fork in one utensil.
Buy Now

Yes! You Can Make a Difference!