History Repeating Itself: Are the Republicans Going to Pull a Pelosi? [36]

I THOUGHT I WOULD REPOST THIS HUB AS THE 114th Congress gets its act together. While Republicans gained ground in the 2010 midterm elections, they, in a huge upset, lost ground in the 2012 general election; which had a lot to do with my 2011 Hub below. Even though their tactics discussed below has not substantially changed from the 112th Congress, the Republicans took it back and then some in the 2014 midterms. Until around July 2014, I thought the Democrats would keep the Senate and gain some more in the House; I was wrong.

In the Hub below, I discuss the possibility of the Republicans angering the American public with their "no compromise", socially conservative, let's go back to the 1800s attitude. While they did all of that, it wasn't enough to overcome 1) the lack of participation by Democrats in midterm elections, 2) the 6-year old Conservative propaganda attack on President Obama, 3) President Obama's color (exit polls bear this out), and probably the most important 4) the general malaise the average American felt about the economy, even though the economy, overall, was doing nicely ... just not for them.

Can't Anybody Find The Right (or Left) Path?

I AM SITTING HERE this evening, 12 or so hours before the 112th US Congress convenes, watching CNN's John King USA interview one of the Republican representatives starting work tomorrow. Earlier, I caught some of CNN's Wolf Blitzer's Situation Room where another new Republican face was interviewed. (To be fair, there were Democratic counterparts present as well.) I was amazed! (I you read my hubs, you will notice that happens a lot.) I think I am about to watch history repeat itself with the Republicans replicating a classic Democratic maneuver; self-destruction!

(A quick 3/11/2011 update - two and a half months into the new Congress and still nothing substanative out of the Conservatives regarding what their plan is to create more jobs. The only plan they actively have on the table at the moment, ill-timed, draconian budget cutting, will actually cost Americans several 100,000 jobs at a minimum.)

Through both those interviews, the focus was on Repealing Health Care. Now I have to say that when asked what their agenda was, the initial response included three references to jobs ("jobs", "getting American people back to work" immediately followed by "creating an environment where job growth can take place"), one reference to the economy, and one reference to repealing the health care bill. Exit stage right for jobs and economy. "America wants the Republicans to dump Obamacare. That is why they voted us into power and we are going to deliver! That is why this is the first thing on our agenda ." (This was all a paraphrase, btw.) The remainder of the interview focused on repealing health care not jobs.

Well, I sort a have to disagree with the Republicans, surprise, surprise. I believe what Americans were angry at and what cost the Democrats the control of the House is that the Democrats focused so much on passing health care reform that they appeared to ignore doing something about jobs. (In fact, they were doing something about it but nobody noticed and the Republicans did a masterful job of controlling the message.)

The trap the Republicans appear to about to fall into will be sprung by both the Republican strategy and tactics. The strategy is their oft-stated, overall agenda to destroy President Obama. The second is their first tactical ploy; to either repeal the health care bill entirely in to-to in order to return back to the good-old-days or to repeal, or not fund, it piece by piece.

The information the Republicans aren't giving you is that Health Care/Health Care Reform was a distant fourth in what motivated people to vote the way the way they did in November 2010, according to a Kaiser Health Tracking poll. Top of the list at 29% was, you guessed it, JOBS. Next was Party Affiliation at 25% and Candidate Attributes/Performance at 21%. Finally, we get to Health Care at 17%; note: for Republicans, Health Care was more important than Candidate Performance and came in third. (You might be interested to know that the other top three Republican issues Budget Deficit/Gov't Spending, Didn't Like Gov't Performance, Taxes, came in at 9%, 8%, and 5% respectively.)

There is clearly one major problem with this approach, don't you see. Neither the stratagy nor the tactic does anything in "creating the environment where job growth can take place" that the Republicans claimed three times that they wanted to do. In fact, it probably does just the opposite. At the very least, it is a distraction and delays job growth.

I don't know for sure why there is such a dogmatic commitment to this path and belief that repealing "Obamacare" is really what Americans want in the face of many polls that show the opposite to be true (in spite of Senator Mitch McConnell's statements to the contrary), but I have my suspicions. First, however, let me throw some statistics at you (you thought this was just going to be an opinion piece, didn't you?)

Do You Support Requiring All Americans to Purchase Insurance With Help For the Poor? (Same poll)

Given What You Know About Health Reform, Do You Have A Generally Favorable or Unfavorable Opinion Of Toward It? (Kaiser Health Tracking Poll, Nov 2010)

As you can see, neither the statistics from 2009 nor those from as recent as November 2010, right after the election where America gave the Republicans the mandate to repeal the health care reform, support the Republicans very public claim that America wants this to happen. As you can clearly see, Senator Mitch McConnell and Representative John Boehner are lying to you! Normally, I refrain from specific perjoratives such as that but these are smart men and they aren't mistaken; they aren't confused; no, they are, with clear conscience, lying to America over and over and over again day in and day out! How can a reasonable, reasoning person not see that?

Please note that the only demographic that is overwhelmingly in favor of repeal are Republicans who voted. The rest of the demographics are either split or in favor of the health care reform package. There is no hint of the overwhelming mandate from America to repeal health care the Republicans claim; you certainly can't read that into a 42%/49% split (with a margin of error of +/- 3%) for those who voted.

A Must Read Even For Conservatives 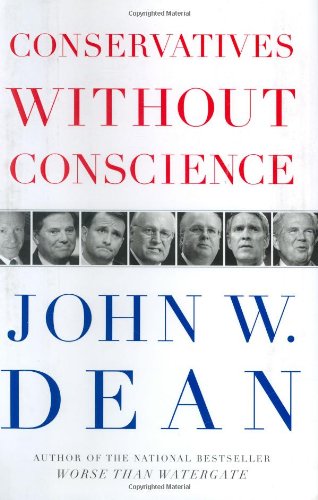 So what would cause these obviously intelligently people to lie when the evidence to the contrary is so public and easy to access? I think it goes to what I have talked about in other hubs I have written and is explained in detail in the book written by John Dean called "Conservatives Without Conscience" that is advertised above. It is a personality characteristic of those who can be classified as Right-wing Authoritarian (RWA) followers (who are normally but not necessarily conservative) and Social Dominator leaders. In a nutshell, if the Social Dominator holds out a position that the RWA follower buys into, then reason goes by the way side. That position is truth and no amount of facts to the contrary will sway the RWA. This is why we have seen for the last decade or more, a hardening of the Republican position until the last two years when it solidified into the 'just say No" block. Those that ran the Republican party in the last Congress are largely SWAs and Social Dominators. The few Conservatives With Conscience (Sen Goldwater and Sen Dole are two examples) that had power in the Senate and House were replaced by SWA Tea Partiers. So, guess who America voted into the House of Representatives? Yep, a whole slew of RWAs and a few Social Dominators.

As a result, it is my guess that the Republicans are going to march down the path of health care repeal, which was a distant 4th on America's care list, and follow the Democrats into oblivion come the next election because they ignored the obvious - JOBS.

Ain't we gonna have fun and lot's to hub about.

I always encourage conservatives to read John Dean's book. It is not that I want to covert anybody from being a conservative, heavens no, who else would I have to debate with? But that is the point, isn't it? I would like somebody to debate with. Dean (this is the same Dean that was Nixon's White House Counsel, btw) shows in his book that many RWA's, once they come to realize that is the way they are behaving, change their behavior. That isn't to say they become any less conservative in their thinking but they do become less dogmatic. They actually do look at facts and when the facts suggest something contrary to their belief, they modify their belief to accommodate the data. Even when the facts aren't at issue, the greater good may be and they become willing to compromise; something the RWA's are not willing to do.

Social Dominators, especially SDs who are also RWAs, on the other hand, are a lost cause. While RWA's motivation is more altruistic in character, even given its dogma, the SDs motivation is purely self-interest; and, because they are very aware of what they are doing, that rarely changes . The SDs fully understand what drives RWAs and they count on that type of behavior to fill the ranks of their political army. The SD's understand that around 40% of Christians in America are Evangelical and follow the teachings of John Calvin and Martin Luther that belief in God relies on faith alone. This is an unreasoning kind of faith that works in the religious world but the SDs want it to work in the political world as well. The SDs count on the fact that the RWAs, who, as John Dean explains, are highly susceptible to authority figures, will expand their unwavering faith in their belief in God to an unwavering, unreasoining faith in the political dogma of their SD leaders.  But once the RWA's begin to understand who they are and begin to use their power of reason that God gave them to analyze what their SD leaders are telling them, then they have started on their way of becoming Conservatives WITH Conscience in the mold of Barry Goldwater or Bob Dole. - My Esoteric