Gary has published Will Rogers, From Great Depression to Great Recession on Amazon. He can explain the house bubble and credit crisis.

Where do you keep your money?

Where do you keep your money?

Some of you know that I contribute to the Seeking Alpha website under the handle Gary A. A fellow contributor has come up with a great plan to protect the FDIC. Elliot Morse says that the FDIC should be limited to banks that keep their own loans, and not be permitted for banks that package up loans into securities (bonds) and sell them on a secondary market. While this idea has a snowball's chance in hell of becoming law anytime soon, people need to start thinking outside the box as the credit crisis continues.

Remember folks, the Fed has given credit derivatives totaling 22 trillion dollars FDIC immunity. If these derivative unwound, would there by anything to pay regular depositors? The Derivatives get first bailouts, with depositors in line behind them!

The Volcker Plan, though not a return to Glass-Steagall, is a way to protect the FDIC insurance fund from having to have a bailout by the taxpayers. This FDIC insurance, though funded by the banks, is basically an empty fund, with lots of banks still to close. The banking shills paraded as experts on CNBC want depositors money,  that amounts to a slush fund for investment banking, kept in place. That way the biggest banks can take your insured deposit and leverage up bets through their investment banking arms and hedge funds. This is simply unacceptable.

I think that we as a nation should get behind the Volcker Plan, which does not keep investment banks from leveraging their investors' accounts, but does not allow them to leverage your bank account. Many of you didn't even know that was happening. CNBC would tell you everything is just fine, and the government has unlimited backstop. But do taxpayers want to be on the hook for 500 billion dollars to the FDIC corporation, when we are already in debt up to our eyeballs? I don't think so. Support the Volcker Plan and call your congressman or woman.

Bank Capital Requirements Will Be Raised

We know that bank capital requirements will be raised. One of the reasons is that banks are leveraging up again, and because commercial real estate is on the brink.

This increased capital requirements is a function of the New World Order financial system. We know that the possibility of a run on the banks is quite high still. The bank crisis is in more dangerous territory than it was before. Again, there is no security market for many types of securities. Where are we going to stuff all the commercial real estate and residential real estate loans if investors don't want to buy them? Housing has always lead the US out of recession. But without investors, will housing rates have to go up? Of course. And will this bode well for banks? No.

The only way that rates will stay low is if the Fed scares people into buying bonds out of fear that the market is way overpriced. I have written about that here.

Kudlow almost had a heart attack, as a professor on 8/27/2009, said that the banks will not succeed without the security market, you know, the bundled loans that killed the banks the first time!

Fact is, he said, deposits will not save the banks! He acted like a positive guy but threw this curve at the end of the interview. I would say this is a really massively disconcerting prediction. I would say also that banks are still in a whole lot of trouble. Sure, the government will back the banks in the near term, but what if this securitization never materializes? What then? I would say that the prognosis is not good if the CDO's don't come back.

Update: Since this article was written, cash buyers with credit lines from big banks, as well as private equity groups, like Blackstone, have bought up real estate in down markets, like Phoenix and Las Vegas. But there is starting to be a weakness in that strategy, as their are thousands upon thousands of empty rentals in those cities, with weak demand caused by the financial devastation of the last housing bubble.

So prices are up, but investors could get burned again.

Update: The congress has given the FDIC a 100 billion dollar credit limit, in essence tripling this credit limit. And yet the FDIC continues to eat through their reserves. While this extra credit limit could bring temporary stability to the program, it all depends upon the economy and how banks fare in this tough economy.

Update: Head of FDIC on 2/26/09 has said that this is one of the most difficult periods in the history of the FDIC. That is a warning folks. It is subtle, but it is a warning.

And have you noticed how many programs and comments have been made about good local banks, and about how good FDIC is? You know why this orchestrated charade is going on? Well, it is because the banks are being raided everyday as people are pulling some or all of the money out for safekeeping in case there is a bank systemwide meltdown.

Readers, I urge you to please pay attention as this information is important! Did you know that there was a run on the banks in September 2008 that threatened the American banking system? Oh, the mainstream useless media didn't tell you?

550 billion dollars were withdrawn in a little less than two hours. Had this not be stopped, up to 6 trillion could have been withdrawn, ruining the financial system of the United States and the world. But wait, I thought FDIC prevented the destruction of the financial system. Well not according to one congressman.

The banks have serious issues relating to their solvency. First, many have taken out money they have in excess of the FDIC insured limit, which has been temporarily bumped to 250 thousand dollars. As people take money out the banks, minimum capital requirements are tested. Add credit card defaults that are raging, and commercial real estate that can tank soon, as well as bad second and third tier assets that are getting worse every day that we wake up, and we need to seriously take a closer look at the FDIC act that created the corporation in the first place.

FDIC insurance has little more than once cent for every dollar in deposits. But people have always been confident in the system which was established in 1933 as a way of stopping runs on banks. Bank runs tended to make depressions worse. Since I believe we could be facing the mother of all depressions, it is necessary to take a look at the FDIC, and the risks involved.

Certainly, if a few smaller banks fell, then the FDIC would have no problem meeting its obligations, but if a run on many banks occurred, it would only be able to borrow from the treasury a total of 30 billion dollars at any one time. Clearly, a multiple bank run in the United States could result in over a trillion dollars of outflow in the matter of a few hours. If you read the FDIC act, you will see that the most that can be taken out as a loan from the treasury is 30 billion dollars. In today's money, this is a thimble compared to the trillions of dollars of liabilities that are lying around on bank books coupled with possible hundreds of billions or trillions of simultaneous withdrawels.

Furthermore, the FDIC corporation does not have to make immediate payment on the insured amount but can do so as soon as possible. There are situations that could cause such a meltdown that this payment would require congressional approval, and under certain circumstances these payments could be difficult to make.

Be sure to check out the video below regarding the meltdown in September as well as the links which explain how the FDIC works in more detail.

Bottom line: the financial meltdown that could be caused by the average citizen taking out money is not likely, but is possible if serious deflation hits and if the housing market deteriorates beyond what most think. And I believe that this is a real possibility. The question then becomes whether we can sell our treasury bonds without interest rates rising, which would add to the slowdown.

Will people start taking money out under the insured limit as we see a deterioration with the demise of say, a Nordstrom, or JC Penny, or Sears, or Saks or a Tiffany? We all have heard that these retailers are a whisper away from bankrupcy. It is something to ponder as we see the deterioration in the biggest credit bubble in the history of mankind.

The link for this article is below with the other links:

Nouriel Roubini, the New York University professor who predicted the global credit crisis, said a government-backed bank ''may crack'' as officials try to bail out their financial systems.

''The process of socializing the private losses from this crisis has already moved many of the liabilities of the private sector onto the books of the sovereign,'' Roubini wrote on his Web site today. ''At some point a sovereign bank may crack, in which case the ability of the governments to credibly commit to act as a backstop for the financial system -- including deposit guarantees -- could come unglued.

What Roubini is saying is not necessarily that American banks could find themselves in this situation, that it is more likely that European countries could have this problem. But deflation is a contagion, and so is confidence in the banking system.

Is the FDIC Safe? 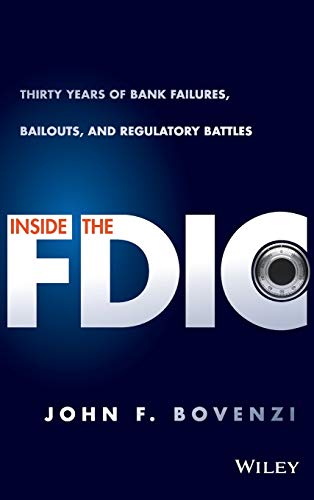