Illegal Immigration in the United States: A Proposed Solution

Illegal immigration in the USA: A hot political topic 2014 and Beyond!

To hear the news reports, you might think the only illegals here in America are undesirable Mexicans so desperate that they send their children across the borders all alone. We know that's not true but if you live in Texas, that's the story you hear most of the time.

Once upon a time, Mexico had a problem with illegal immigration:

Texas used to be part of Mexico you know? In fact, there was a plan to make The Brazos Caldwell area a capital city named Tenoxtitlan (after an Aztec capital). So here's what happened a little less than 200 years ago. Mexico had enacted a law to STOP white immigrants (Europeans) from entering Texas. Military force was going to be used to enforce this law. But the Lieutenant Colonel who was given the orders DISOBEYED. When the first immigrants arrived, instead of sending them back across the border, he showed them sympathy and compassion and let them carry out their plan to build a new home and a new life. It wasn't very long – took about four years – Texas was filled with “illegal immigrants”. Do you know what they did once they got settled? REVOLTED!! A new republic was born.

(Have patience dear reader. I am going somewhere with this.)

Why Build Walls and Fences Anyway?

There is the Great Wall of China and there was once the Berlin Wall. Walls to keep people out (or keep people in) have been commonplace throughout the history of mankind, haven't they? Walls were used to fortify cities and protect the residents. If you believe the biblical account, there used to be walls surrounding Jericho. So in Texas USA, there is a lot brew-ha-ha over building a fence to protect our borders. Protection from what, you ask? From marauding invaders, terrorists, and possibly “illegal immigrants” who want to come here.

Wall? Fence? Same thing, in my mind. But will a fence really add a layer of extra protection for our borders and solve the problem of illegal immigration ? That is definitely debatable. To me, it's six in one hand and half a dozen in the other.

As you can see from history, the Mexican government tried to implement border security. They didn't build a wall or a fence, they built a fort. Perhaps it would have succeeded if only they had hired the right man for the job!! Who knows?

But why build walls and fences IF you can build bridges by erasing borders?

A Proposed Solution to the US Immigration Problem

Why don't we change our approach to the “problem” of border security?

Lets dig deep and get to the heart of the matter. We are labeling human beings seeking life, liberty and the pursuit of happiness as “illegal immigrants”. Why ILLEGAL? Because … there are LAWS that are being broken. That's true true true. But consider this? Is illegal the same thing as undesirable? These are real people – a lot of them, honest hard-working people with families. Nobody likes freeloaders and bums and relocating criminals just moving their operations from one territory to the next. But what honest decent compassionate individual doesn't want to try to help another honest person who is trying hard to help themselves? Especially, when children are involved. Because you think to yourself: 'That could be me! I'd appreciate help.'

When people are born and raised in a certain place, it often takes a heart-wrenching genuine effort to uproot and replant themselves somewhere else. But why do they or why should they have to leave their homeland, their home? Look at Mexico! Good food, prime real estate and some hard-working people who know the land and know how to work it! Those are awesome assets for any country!

Rather than insisting on a DIVIDE between the USA and Mexico, why not just make Mexico a part of the United States? Don't bark at that!!! Wasn't New Mexico, Arizona and California under Mexican rule at one time? Uh huh.

Look at the image below. There would be no problem with border security if we ERASED THE BORDER! There is no reason why Mexico-US relations should be strained over this issue. Human trafficking is a CRIME, since we're tossing around the term "illegal". It is a horrific "problem" THAT CAN BE SOLVED. Think about it. :) 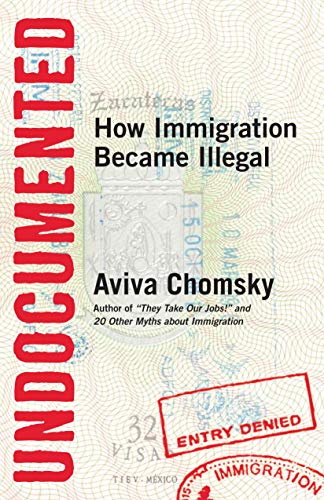 Coming to America: A History of Immigration and Ethnicity in American Life
Buy Now