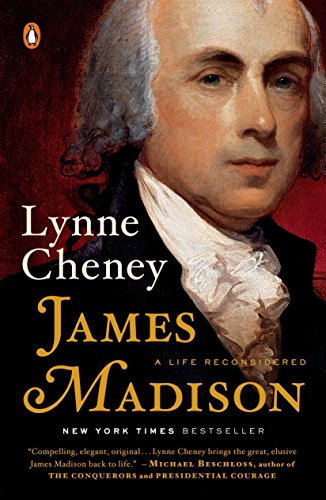 Born in Port Conway, Virginia. He graduated from the College of New Jersey (now Princeton University) in 1771, and in 1794 he married Dolley Payne Todd.

Madison's first experience at statecraft was at the convention (1776) that drafted the Virginia constitution.

Madison served in the House of Representatives from 1789 to 1797. It was a period when the political party system was solidifying, and Madison quickly became a leader of the Jeffersonian faction. When Thomas Jefferson became president, he chose Madison as secretary of state, an office Madison held throughout Jefferson's two terms. He was Jefferson's personal choice to succeed him as president.

Madison's two terms as president were marked by deteriorating relations with Great Britain, culminating in the War of 1812. Highly unpopular, particularly in New England, it became known to his Federalist opponents as "Mr. Madison's War." The war went badly, and in 1814-15, the Hartford Convention was called by New England Federalists. It considered seceding from the Union, but the Treaty of Ghent, which ended the war in a stalemate, was signed before the convention could achieve any of its aims. Madison retired to "Montpelier," his plantation in Virginia.