Kids in Need of Desks in Malawi

The Beginning of the K.I.N.D. Fund

In 2010 American television commentator Lawrence O'Donnell traveled to Malawi, a tiny landlocked country in southeast Africa, to inquire about the needs in the schools there. He traveled there after talking to a friend who had visited Malawi and told him about some of the needs she had seen on her trip.

The needs in Malawi are great. It's one of the world's least developed, poorest countries, with a low life expectancy, high infant mortality, and high prevalence of HIV/AIDS.

When O'Donnell visited the schools in Malawi he found students sitting on the floors of the schools, sometimes dirt floors and sometimes concrete floors, because they had no desks. The teacher, when asked, told him their greatest need was for chairs.

Lawrence O'Donnell then set about trying to find, not just chairs, but desks for these students and their teacher. On this first trip to Malawi, he found a woodworking shop that had been making desks for UNICEF and ordered thirty desks to be delivered to the school he had visited that week.

Inviting Viewers to Participate in the K.I.N.D. Fund

During the holiday season in 2010, O'Donnell told his audience about his summer trip to Malawi and invited viewers to contribute to the fund he had set up in conjunction with UNICEF to provide desks for Malawi schools. They called this fund the K.I.N.D. Fund, Kids In Need of Desks. A week later, the fund had raised over a million dollars.

Every holiday season since 2010, Lawrence O'Donnell has retold the story of his trip to Malawi and invited viewers to contribute to the UNICEF fund that is still delivering desks to the schools in Malawi.

Millions of dollars have been contributed and thousands of desks provided to the children of Malawi. About half of students in Malawi have desks now, and the fund has been extended to provide scholarships for girls to attend high school. Primary school is free in Malawi, but the students must pay to attend high school. When families cannot afford this tuition for all of their children, it is the male children who are usually chosen to attend. This fund helps some of the girls afford an education.

In addition to helping the schools, the purchase of all of these desks helps the economy of Malawi since all of the desks are made locally. 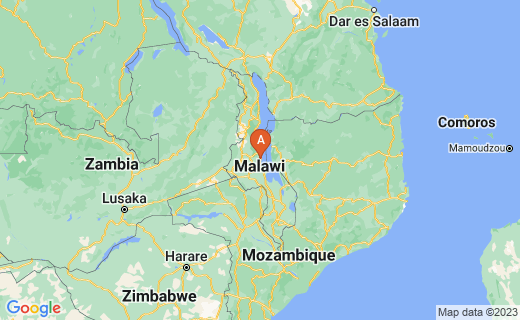 Adding Meaning to A Christmas Celebration

Through the years, we have seen Lawrence O'Donnell tell the story of his trip to Malawi and invite viewers to participate. We have admired and sometimes talked about contributing, but we already have our charitable projects and have usually passed this opportunity by.

This past holiday season while watching the presentation we were preparing for a visit with our four granddaughters. For $55 dollars, O'Donnell said, we could buy two desks that would seat six children in Malawi. I had just spent that much money on purchasing two gingerbread houses and the items to decorate them prior to our granddaughters' visit. So that night we called the UNICEF number and made this $55 donation in the name of our four granddaughters.

Just before our granddaughters' visit the next week, we received a card from UNICEF with all of their names written on it. So one night while they were visiting we showed them the video of students in Malawi sitting on floors, gave them the card and told them we had bought two of these desks in their name so that six more children in Malawi would not have to sit on the floor at school.

When our granddaughters are older and look back at our times with them during the holidays, I think they'll have fond memories of decorating gingerbread houses, but most of the gifts we gave them will soon be put aside, lost or worn out. I hope this gift of giving will stay with them. Buying desks for school children in Malawi may not be as much fun as decorating gingerbread houses for 5-9 year olds but, in the long run, it may be more rewarding. They may also be able to pinpoint Malawi on a map.

We hope to add this activity to our Christmas celebrations with them every year--gingerbread houses and desks for students in Malawi. Seems like a good combination.

Are gifts to charities part of your Christmas celebration?