Libertarian Reality: No Such Thing as a Free Lunch!

The Libertarian Party is seeing 20/20 in 2020. By that is meant that they have perfect vision when it comes to understanding that “There Ain’t No Such Thing as a Free Lunch.”

After holding a “2020 Libertarian national Convention Theme Contest” for the hopefully obvious purpose of picking a theme for the party’s national convention to be staged in Austin, Texas in year 2020 the LP theme-pickers decided to go retro with TANSTAAFL.

The acronym “TANSTAAFL” for “There Ain’t No Such Thing As A Free Lunch” was an ever-present catchphrase for the first eight years of the LP’s existence. It’s being resurrected now because, according to the official email from the LP, “This theme is just as relevant now as it was 50 years ago. Governments continue to promise ‘free stuff’ at the expense of your liberty.” 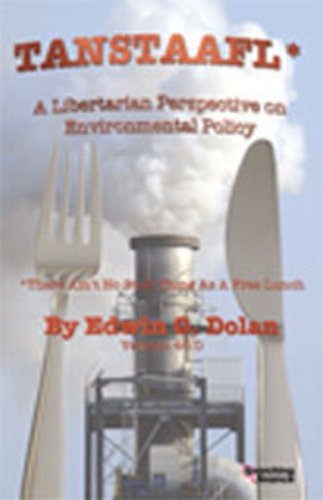 TANSTAAFL (There Ain't No Such Thing As A Free Lunch) - A Libertarian Perspective on Environmental Policy
Just as there is no such thing as a free lunch in every other sector of economics so too is there no free lunch in the Green New Deal. Someone has to pay and that someone will always be the people with the least political power, the least money and the least crony connections to the big Government-Corporatist Complex. That someone is known universally as “Taxpayer.” Those with the power, wealth and connections will always live at the expense of everyone else and Global Warming, Climate Change and the Green New Deal are no exceptions. Funny how all environmental solutions exactly fit the progressive political agenda.
Buy Now

“Free Stuff” is continually being offered by the Alt-Left Democratic Socialism wing of the Democratic Party with people like Bernie Sanders and Alexandria Ocasio-Cortez and other “free ride” advocates.

Millionaire presidential candidate Bernie Sanders, for one, has long been pushing for—according to Inside Higher Ed—“free tuition and fees at public universities for all students with family income up to $125,000 and would cut student loan interest rates in half.”

But if we tax the “rich” like he wants to do no family’s income will reach $125,000 so that means free tuition for everyone—which will cheapen every diploma just like monetary inflation cheapens every dollar. But then, who cares, he just wants to get elected.

So what do you think “free education” really means? That professors, lecturers, advisors, coaches, teachers, teachers aides, deans, counselors, administrators, crossing guards, custodians and everyone else associated with schools will work for free? Or will millionaire Sanders pay their salaries? Or will every taxpayer pay their salaries?

And further, is anyone telling naïve Millennials that once they step into their first job it will be the higher-than-ever tax bite from their paychecks paying everyone else’s salaries and “free" tuition?

The acronym TANSTAAFL should be changed to TANSTAAFA to mean “There Ain’t No Such Thing As A Free Anything."

According to Wikipedia the specific quote “There ain’t no such thing as a free lunch” and similar closely related wordings have been used since the 1930s. They all seem to stem from Nineteenth century bar owners who included the cost of cheap food in the price of a glass of beer and then disingenuously advertised a “free lunch” with a mug of their (cheap flat bitter brackish barrel-bottom) beer.

One of the earliest known uses of "There ain't no such thing as free lunch" appeared as the punchline of a joke in the June 27, 1938 El Paso Herald-Post entitled "Economics in Eight Words."

In 1945 the phrase appeared in the Columbia Law Review. In 1949 one Walter Morrow used it in a San Francisco News article and Pierre Dos Utt wrote a monograph titled TANSTAAFL: A Plan for a New Economic World Order in which he describes, according to one report, “an oligarchic political system based on his conclusions from ‘no free lunch’ principles.” Whatever that means.

The two sources best known to libertarians are Robert A. Heinlein and free-market economist Milton Friedman.

The “no free lunch” quote was used by science fiction writer Robert A. Heinlein in his most libertarian novel The Moon is a Harsh Mistress—sometimes referred to as “A manifesto for a libertarian revolution”—first published in 1966, in which a former Lunar prison colony seeks freedom from its dictatorial warden-and-penal-system style government known simply as “Authority.” In the book, Mannie, the story’s protagonist, explains the acronym’s meaning to a newly arrived Lunar tourist.

“One way or other, what you get, you pay for.”—Robert A. Heinlein, The Moon Is a Harsh Mistress

In 1975 Milton Friedman picked up the phrase, cleaned up the English, and used it as a title for his book There's No Such Thing As a Free Lunch along with the subtitle “Essays on Public Policy” and a cover blurb that read “Including Milton Friedman’s Playboy Interview.”

The book is a collection of Friedman’s magazine columns of then-current economic realities explained in layman’s terms, and since they’re still relevant today many consider this work a classic.

Since today’s official Libertarian Party slogan is “The Party of Principle” the LP followed its own TANSTAAFL principle by putting a price on everyone’s convention theme vote. Members could vote an unlimited number of times for their favorite slogan—58 were originally submitted—but every vote had to be accompanied by one dollar, translating the contest into “There Ain’t No Such Thing As A Free Vote—or a Free Convention.”

Yes, while the Reps and Dems accuse each other of “buying votes” while each pretends that they themselves would never do such a thing the Libertarians do it openly and proudly.

The result was that the official “2020 Pay-to-Play Libertarian National Convention Theme Contest” raised a total of $24,007 toward convention expenses. The Torch Eagle party, after all, doesn’t syphon money from taxpayer pockets to fund their conventions like the Donkey and Elephant beasts do.

So maybe the No Free Lunch theme isn’t so much “retro” as it is up-to-the-minute “Millennialist Contemporary.” It has become excruciatingly necessary to jar Americans back into the once long understood reality that nothing is free. Someone, somewhere, somehow, in some way must pay for everything that is created in our lives, in our communities, in our world.

A recent article from Real Clear Politics spells it all out.

And how will the politician’s pipedreams be paid for? By taxing the rich? By taxing the very billionaires and millionaires who actually run the government and make the bills and gin up all those fine print loopholes on page 5721 exempting themselves from paying the taxes.?

C’mon, does anyone really think that the people who run the government for their own benefit will actually pass any bill that will actually tax themselves?

So how will all of these freebies actually get paid for? All of this will be freely funded from taxpayer pockets and paychecks by the IRS.

The only silver lining in this political gold rush is that once in office politicos seldom keep their promises.

So while there can be no free “things” libertarians can offer everyone many free concepts such as a free society with free speech, free thought, free markets, free interactions with one another and best of all lives legally and morally free from coercion, intimidation and fraud along with the opportunity of using defensive force to keep your lives free from the initiated anti-freedom force of others.

Okay, okay, in full disclosure it must be admitted that perennial LP presidential candidate Vermin Supreme spoon-fed voters in 2016 with the promise that when he becomes president “Everyone Gets A Free Pony” in complete defiance of TANSTAAFP.

But then it’s also generally understood that Mr. Supreme is a performance artist and the Libertarian Party’s unofficial court jester with a gift for adroitly ridiculing the whole Republicon-Democrapic political free stuff give-away mentality.

So maybe on that score alone both Vermin Supreme and the national Libertarian Party should be given a big thank you by all libertarians, voluntaryists, free marketeers, post-statists and “rational anarchists” (Heinlein’s term) for reminding a whole generation of young people that “spoon-fed” is an idiom and does not literally mean a politically catered free meal with the taxpayer picking up the tab and the tip.

As For You Republicans…

You can wipe that smug look off your faces. You’re as guilty as your liberal collaborators in spoon-feeding taxpayer billions of “free stuff” to your Corporate Welfare Wankers. Libertarians haven’t forgotten you. When it comes to subsidies, tax breaks and bailouts for your bosom business buddies you’re all just one big Republicratic Pay-to-Play Party.

Chew on that free punch in your breadbasket.

Free Stuff Democrats Nearly all of the Democratic presidential candidate wannabes are competing with one another to promise voters whatever free stuff they think will get them the nomination without telling you how much the free stuff will actually cost you.

Equal Opportunity Corruption Longtime libertarian political writer Doug Bandow writes in The American Conservative how corporate welfare from the federal government under both Republicans and Democrats “turn capitalism into a rigged game of Monopoly.”

TANSTAAFL Is Universal Wikipedia explains how widely this acronym and its variables are used—in science, economics, finance, statistics, technology, sports and social policy—even as politicians are dependent on the general voting public never getting it.

The Opportunity Cost Beyond the fact that someone somewhere has to pay for what you get this article explains that you are also paying in the form of an opportunity cost, meaning that to get what you want you must give up the opportunity for something else.