Gorillas and Chimpanzees are Endangered by the Illegal Bushmeat Trade

The bushmeat trade is an "imminent threat to the survival of great apes in Africa." Dr. Jane Goodall

"How serious is the problem? The commercial hunting of bushmeat could well lead to the loss of several species, including chimpanzees, gorillas & elephants." Dr. Jane Goodall

You may have heard the term "bushmeat". This term is used to describe the meat of any wild animal living in the forest in Africa. Eating bushmeat is a cultural tradition for the native people of the African forests. Practiced as it had been for centuries, it posed little or no threat to the population of wild animals. However, with the introduction of commercial logging, bushmeat hunting has taken a nasty turn and gone commercial, too. Logging destroys habitat for both wildlife and indigenous people and opens up formerly unreachable wild areas to commercial bushmeat hunters. This threat is particularly dire for primates, whose populations were already dwindling. According to Dr. Jane Goodall, the chimpanzee population in the wild in Africa has dropped from one to two million in 1900 to a mere 150,000 today. While that may still seem like a lot of chimps to the average person, it is actually a very alarming decline. With habitat rapidly disappearing and the existing population being actively reduced, it will take very little time for those 150,000 chimps to become none. The fact is that of all the primates on earth, human beings are the only ones whose existence is not threatened, and all the others are threatened by human activities.

Commercial logging companies disrupt habitat for wildlife and indigenous people by plowing roads into the thickest parts of the forest. They set up a situation in which the local people have no choice for survival but to join those working for the logging companies. According to the Humane Society of the United States (HSUS) the logging companies compound the problem by supporting the bushmeat trade that destroys food that was previously freely available to the indigenous people. This makes their traditional food available only through purchase on the black market. As soon as a logging company forces a new road into the forest, the commercial bushmeat hunters are there, slaughtering the wildlife. They set up stands along the newly established roadsides to sell the carcasses. The logging settlements create a quick and easy market for the sale of the slaughtered animals. Logging company employees use logging trucks to haul the dead bodies off to the meat market. When approached by officials to seek cooperation in stopping this practice, logging companies claim that they are unable to stop it because the availability of meat and money are too much temptation for their employees, who are often the original inhabitants of the destroyed forest, forced by circumstance to play this deadly game.

According to HSUS, logging companies are well known for not providing adequate food for their employees in the logging settlements. Instead, they provide guns and ammunition to hold organized hunts to slaughter the local fauna. Loggers are forced to depend almost entirely on these hunts to get enough food to survive. Logging settlements often have as many as 4000 residents, so the amount of bushmeat they can consume is staggering. Animals hunted for bushmeat include many species. Not all of them are endangered, but that is a condition that is changeable and changing. The more an animal population is slaughtered, the more endangered it becomes. While primates make up a relatively small percentage of the animals slaughtered for bushmeat, the fact that their populations are already dwindling dramatically makes these losses devastating to the remaining population. Regardless of the fact that the great apes (gorillas, chimps, orangutans, and bonobos) are protected under national law, the logging companies continue to allow and even support commercial hunting of them. The World Society for the Protection of Animals (WSPA) states that several thousand lowland gorillas are killed every year for bush meat. According to The Bushmeat Project, up to 8,000 endangered great apes are killed annually for the bushmeat trade. Furthermore, the Bushmeat Project states on its website that more great apes are eaten by human beings than are kept in the total of zoos and labs around the world. Information found at their website indicates that if the slaughter continues as it has, there will be no more wild apes within the 15 - 50 years' time. It is easy to see that the bushmeat trade is a terrible blow to the already endangered status of our closest wild cousins.

The death of an individual gorilla is a terrible blow to the general population, and it is even worse for the troop in which that gorilla lived. It is well-known and well-documented that mature, male silverbacks are the foundation of their troops. They guide and protect the females, infants, and lesser males. These large mature males are greatly sought out by poachers and commercial hunters because their large size means that they will bring a large price at the meat market. When a silverback is killed, his troop is left devastated and unprotected. They become easy targets for aggression from other primates - including man.

Mothers & Infants May Be Killed Together

Mothers Are Killed & Infants Are Orphaned

Often mothers and infants are slaughtered together, but when the infant is spared, her fate may be worse than if she had been killed. She may be caged and taken to market to be killed and eaten later. She may be sold as a "pet". She may simply be chained until she dies. Indeed, WSPA investigators report often seeing young chimps and baby gorillas in chains in the logging settlements. If sold as a "pet" a young chimp or gorilla fetches only $100 in the marketplace according to HSUS. This is a pitiful price for the life and dignity of one of these noble creatures. It is a terrible fate for our closest wild cousins. They do not take well to being raised in captivity. When they become too big and difficult to control, they are often euthanized or put in a sanctuary. Even though sanctuaries are safe and pleasant places, they are not freedom. A chimp or gorilla that has been separated from its own kind is doomed to a life dependent on humans.

To Be Sold As Pets Or Meat

What Is Being Done? What Can Be Done?

Even in the rare cases when the logging companies might cooperate with efforts to stop the illegal commercial bushmeat trade, HSUS reports that they are actually somewhat lacking in the resources to follow through. The African government is also short of resources. It will be important for interested parties worldwide to become involved in putting an end to the wholesale slaughter of African wildlife, primates, and especially the great apes. To this end, a number of agencies have allied to create and implement some solutions. For example, in 1996 the Bushmeat Project, the WSPA, Ape Alliance, and the Humane Society of the United States worked with the European Parliament and a French-owned ammunition manufacturer to put an end to production of a specific type of ammunition in west-central Africa. Because of this effort, cartridges that are powerful enough to kill an adult male gorilla can no longer be manufactured in this region. This agreement sharply curtails the availability of the main type of ammunition that had been used to kill large, protected game like gorillas and elephants.

In the future efforts must be made to achieve the following:

1. Logging companies must be held accountable for their support of the bushmeat trade.

2. Logging companies must be made to provide proper nutrition for the residents of their logging settlements.

4. The indigenous people and the logging company workers (often one and the same) must be educated as to the importance of preserving and protecting endangered species. Often these people are victims of the ravages brought about by commercial logging themselves. They are simply struggling to survive and do not understand the long term implications of their actions.

5. Tourists and travelers must staunchly refuse to eat bushmeat or to patronize establishments that serve it. Remember that bushmeat is not just the meat of apes, but also of other wild animals, especially those that are endangered. Also, travelers should note any animal cruelty they witness and report it to local authorities and to the embassy of the country in which they are traveling. Regardless of the fact that this cruelty may be viewed as culturally acceptable, it is important to let the authorities know that it is not universally acceptable.

The Devastating Effects Of Commercial Logging

If you would like to help end the bushmeat trade, please visit these sources and resources:

"I am outraged by the killing of chimpanzees and other imperiled wildlife species for the commercial bushmeat trade—a shortsighted and cruel practice that is pushing great apes and other endangered species to the brink of extinction." ~ Jane Goodall

The Bushmeat Trade Exploits The Helpless

Other Animals Also Suffer From The Bushmeat Trade

An excellent overview of the great ape dilemma... 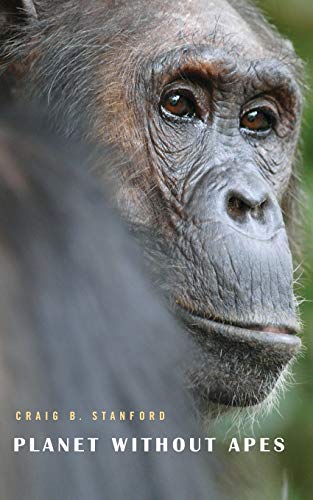