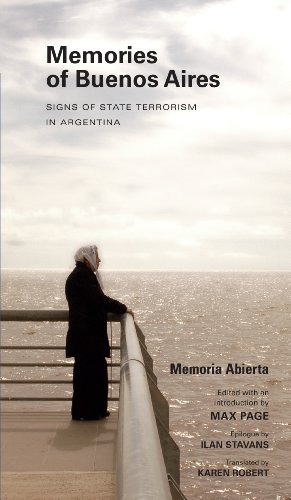 Beautiful, sunny Buenos Aires, Argentina with its lovely tree lined boulevards holds an ugly, dirty, secret. Many of the government, military, and elite of :Argentina have adopted children that really came from a dark time in Argentina between the years of 1976-1983 when the babies and small children of "los desaparecidos" the disappeared, who where snatched off the streets of Buenos Aires, and have never known their true biological families still living in the city. And, the mothers and grandmothers of these babies and small children search vigilantly each day for those snatched children in hopes of being reunited with them one day.

In May 1976, in the capital city of Buenos Aires, Argentina experienced a military junta and coup which imposed a dictatorship government which, in turn. rose up against the leftist and communist sympathizers who were printing their newspapers and brochures and gathering on university campuses to protest and hold rally's against Argentina's government.

From 1976-1983, military soldiers, officers, government officials and the police under the Process of National Reorganization "disappeared" as many as 30,000 people, mostly young Argentineans in their 20's and 30's. This action was justified by the junta "against" a revolutionary insurrection waged by "subversive terrorists."

General Jorge Rafael Videla, the junta's leader, defined anyone a "terrorist" whose ideas were contrary to Western, Christian civilization.

University students and young professionals were rounded up and literally "disappeared" from Buenos Aires and their families. Victims were abducted and kidnapped as they stepped off of buses, walked home from work and school or snatched in midnight raids of their homes. Their families never saw them again.

Approximately 30% of those taken were women who were snatched along with their small children. Three percent of these women were pregnant or became so in detention, usually through rape at the hands of guards and torturers. Pregnant prisoners were routinely kept alive until they had given birth. Sometimes, the mothers were able to nurse their newborns for several weeks or months after giving birth, and then the mothers were killed - murdered by the military regime.

The babies were then taken and given to government, military and elite families of Argentina as adopted children. Many of the families receiving these children knew from whence they came. Argentine courts were in collusion with the government over these adoptions. But, there were a few women who did not know, immediately at the time, exactly where the children came from, but eventually came to realize their adoptive child could be one of "the disappeared."

The Process of National Reorganization wanted to create "authentic Argentines." These children of the detained and then murdered, were seen as "seeds of the tree of evil." The military regime believed that through adoption tho seeds could be replanted in healthy soil.

The women who were mothers and grandmothers of "the disappeared" organized and in 1977 gathered every Thursday to march in silent protest around the plaza of the Presidential Palace in Buenos Aires, wearing white kerchiefs emproidered with the names of their missing children and grandchildren.. Silently, they demanded answers from their government. And to this day they have never given up in their search for their family members.

The mothers and grandmothers organized themselves into two groups. First, in 1977 was Las Madres (the mothers) de la Plaza Mayo and later many of the mothers reorganized under Las Abuelitas (the grandmas) de la Plaza Mayo, when they reallized their children had been murdered and their grandchildren adopted into other families. They have worked tirelessly and vigilantly since 1977 to find these missing children and return then to their biological families.

And, Las Abuelitas (the grandmas), specifically, have been successful in reuniting lost grandchildren to their rightful families. Over the years, they have had to fight the military, the courts, the judges and the government to do this. It has been a long, difficult and protracted fight. The grandmothers are today in their 80's and 90's; but they still search and fight for their "desaparecidos" each day of their lives. They have never abandoned their search.

Today, through DNA testing, they are able to reunite snatched children (who today are in their 20's and 30's) with their biological grandparents and families. Naturallly there are happy reunitings. But, not all grandchildren want to be reunited with biological families because they are strangers to them. Many of the "desaparecidos" remain loyal to the only parents they have known - their adoptive parents.

Over the years, of course, Argentine politics has entered the picture and has affected the grandmother's fight for their grandchildren. Each new Argentine president elected over the years has to decide how to handle this powerful group of elderly women. Some presidents over the yeasrs have worked with the grandmothers and some have worked against them, making their search more difficult and throwing road blocks up before them.

Beginning in the 1990s with a sympathetic president, many of the original members of the l976 junta, have been found and convicted of being the abductors of these children or accepting adoption of these children knowing full well they were "desaparecidos". They have been imprisoned for their past actions.

Many of the 80-90 year old grandmothers, today, remain in their Buenos Aires homes, waiting, just waiting to be reunited with their snatched grandchildren some day, their hearts breaking as their time runs out.

The Grandmothers of the Plaza Mayo, one of the world's most renowned human rights groups, have been successful in seeing two prior junta dictators sentenced to prison for "crimes against humanity." On July 6, 2012, Argentinian Judge Maria del Carmen Roqueta handed down a 50 year prison sentence to former dictator Jorge Rafael Videla, 86 years old and a 15 year sentence to Reynaldo Bignone, the last of the junta's dictators, 84 years old. A half dozen other military figures received prison terms of 14-40 years for their part and participation in "the systematic stealing of babies from political prisoners" during the years 1976-1983.

For three decades the Grandmothers of the Plaza Mayo have lobbied and searched for evidence and witnesses to these human rights crimes. Small children and babies stolen from the mothers who were political prisoners of the junta were eventually adopted by the Argentinian elite and military officers. These stolen children and babies have never known their true families and today are discovering through DNA testing who their rightful parents and grandparents truly are. Some are overjoyed by the discovery and some are still loyal to the families that raised them.

Through their diligent work, the Grandmothers of the Plaza Mayo have finally seen the true perpetrators if these human rights crimes finally brought to justice. Both Videla and Bignone have been behind bars for years for other "crimes against humanity."