Can Humans Make It Rain in the Desert?

Susette has a Masters degree in Sustainable Development. She leads her local Green Council and writes for The Sustainable Business Review.

Is it possible to make it rain where and when you want it to? Native Americans believed they could make it rain. The U.S. military has done it, as have the governments of China, the United Arab Emirates, and other countries in different parts of the world. Agriculturalists do it. Different techniques have been used, and as we find out more about how rain forms and falls, new information brings new possibilities for control, or at least redirection, of rain to where we want it.

Many Native American rituals honor rain, the best known being the intricate rain dance of the Pueblos (Zuni), which is still enacted today in the southwestern United States. The Quapaw and Osage in the Mississippi/Missouri area had rain dances as well. In other parts of the world, there are Slavik, Romanian, and Tibetan rain rituals. In the region of southern Africa, the Rain Queen ritual calls upon an ancestor (Mudjadji) of the Lovedo people to make it rain. Many of these dances may have actually had a correlative effect, since many of them involve the kicking up of dust (keep reading).

Cloud seeding is a practice that, following the westerner's more "practical" bent, involves physical intercession with clouds. After studying the nature of rain and the makeup of raindrops and clouds, U.S. scientists discovered that each raindrop forms around a kernel of some foreign substance, similar to the way pearls form in oysters.

During the VietNam War in the late 1960s, U.S. warplanes seeded clouds over the Ho Chi Min trail with silver iodide, hoping to flood out the Viet Cong supply routes. It worked, but when word leaked out that thousands of innocent civilians were killed as well, and there were more plans on the way, the United Nations banned cloud seeding for military purposes (i.e. environmental warfare).

Many countries continued developing the technology for agricultural and other purposes, however. Russia, after the Chernobyl incident in 1986, used cloud seeding from the air to prevent radioactive rain clouds from spreading to more populated areas like Moscow. Instead, the clouds dumped their rain over the nearby region of Belarus, along with the radioactivity it had collected, whose children even now show the effects of intense radiation poisoning.

China, the country that currently spends the most on cloud seeding, used it to clear the skies of pollution for the 2008 Olympic Games. And, very recently, the United Arab Emirates seeded clouds from the ground to create 52 unpredicted storms in the Abu Dhabi desert where it almost never rains.

Rain in the Desert - Filmed in Oman

Then there's nature's way. You may have heard about the leaf bacteria that causes "Bacterial Speck" on crops. Enter "Pseudomonas syringae" - nature's own cloud seeder. This ice-maker bacteria grows on the leaves of tomatoes, tea, and other crops where agro-businesses would rather it didn't. It's blown off en masse by passing breezes, or kicked up from detritus on the ground by crop pickers (and dancers) and blown high up into the atmosphere, where water condenses around each bacterium and forms rain. Unfortunately man, in his zeal to protect crops, is doing everything possible to kill it off.

What if, instead of favoring crops, someone were to choose an isolated island to cultivate the bacteria? Where all the plants this bacteria loves best were planted and grown, so it could thrive? It could be an island located upwind of a desert area, so rain created by the bacteria would fall on land that needs it. It would be a haven for scientists worldwide to study, firsthand, the creation of rain by natural means.

While we're waiting for such an experiment to take place, angst about the lack of rain where we need it continues to grow. Areas without rain are longing for it and areas with too much rain are longing to give it away. No place can thrive on either of those two extremes: All sun or all rain. There has to be a balance between sun and rain for plants to grow and humans to be healthy. Even sunny Southern California needs rain sometimes.

Ideally, every biome on the globe would have a balance of sun and rain that would allow local inhabitants to thrive. There is some indication, geologically, that such a balance once existed, and some places, like Western Europe and New Zealand, seem to still have that balance. I believe that humans have been affecting the balance more than we are aware - sometimes positively, more often negatively.

Awakening to past impacts we've had on the environment could go a long way toward goading us into correcting practices that have led to the unhealthy weather extremes we see in the world today.

According to NASA readings, 2010 and 2011 were the two heaviest rainfall years on record, since recording started in 1880. Rainfall was strangely distributed as well, with the Horn of Africa, normally fairly wet, being almost devoid of rain and Australia, normally fairly dry, having its 3rd highest rainfall in 112 years. 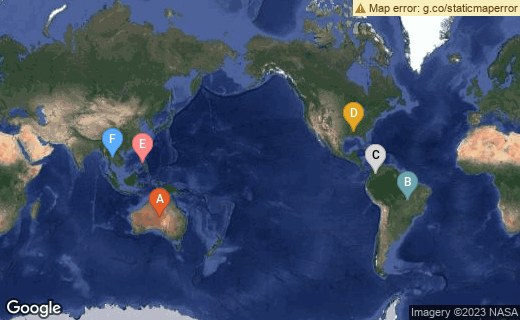 In addition to these more extreme rainfall events, there was extra heavy rain and floods with records broken in New York, Pakistan, South Korea, Norway, and Scotland, among others. There was also extra heavy snow in South Africa and Chile in 2011, and unusually extreme heat waves and/or drought in the central United States, Afghanistan, and the Arctic.

What are the conditions for rain that humans have been affecting? For rain to fall in an area, there are three main factors that need to be present:

Observing from Los Angeles CA where I live, these three conditions are seldom met in most cities, and cities are growing worldwide. Although heavy clouds are easily formed from ocean evaporation nearby, they are also pushed upward by the heat of the city. The earth is hard, dry, and hot, because the ground is so covered with buildings, concrete, and asphalt that the aquafir cannot recharge when it does rain. What once was moist air from ocean breezes is now dried up by heavy auto exhaust and factory emissions of chemicals - many of which were designed to keep machinery or people dry (air conditioning) and which have the same effect on air. Although Los Angeles has an ongoing project of tree planting all over the city, the heating effect described is counteracting transpiration produced by trees and other vegetation.

However, the situation is better than it has been. As the city begins to reconstruct the Los Angeles River, and replace its impermeable surfaces with porous ones, conditions will begin to shift from rain-hostile to rain-friendly.

Why There and Not Here?

Why does it flood in Thailand and not in Los Angeles? Why in Mississippi and not Texas? Evaporation from the ocean and other surface waters never stops. Water continues to heat up in the sun, evaporate, and rise into the atmosphere, no matter how cold or hot neighboring land masses are. As clouds form, if conditions aren't right for them to drop as rainfall in one area, they will continue to blow further along until conditions are right.

The more land that is denuded (forests chopped down, cities built, grasslands turned to desert) the fewer cool, moist areas there are to help rain form and drop. So it all congregates on those fewer and fewer areas that still have favorable conditions - those areas on the map above. This is what creates extreme rainstorms and floods. When humans catch on that they have the power to reverse this trend, then we will start to see an evening out of rainfall again.

Meanwhile, in areas where rainfall is still minimal, there is no reason that new technologies for collection and storage of whatever rain does fall cannot be utilized. There are rain barrels, underground and above-ground cisterns, rain garden and rooftop garden kits available. People can replace their own driveways and sidewalks with porous concrete or pavers, or even replace lawns with native plants and rocks to increase soil permeability. Now is a good time to plant a tree. Passing this article on to your city may encourage it to become more rain friendly too.

Make It Rain by Tom Waits

Singin' in the Rain
SINGIN' IN THE RAIN is one of the best musicals of all time, even for people who don't normally like musicals. It's an older film that gains in critical and popular stature with every passing year, a national and world treasure of cinematic art. The 1st CD is the film. The 2nd CD is a goldmine for viewers who want to find out how it was made.
Buy Now