What is an exotic species like the muntjac deer doing living in the wild in the UK? If you are walking through woodland, farmland, across a park or common, or even down a village street you might catch a glimpse of one of these cute, diminutive deer with large, melting eyes. But however appealing the muntjac deer might look, these tiny deer are capable of destruction on a mass scale and are feisty little things that have no problem in attacking people, dogs or foxes if they feel threatened or they need to defend their babies. They are known as an invasive or introduced species, which means that they originated in a different country and were brought here at an earlier time, either intentionally or by accident. Invasive species are a big problem across the globe, as they can cause many problems to native species and be very disruptive to local ecosystems, and here in the UK the muntjac is considered to have become such a pest that it has been listed as one of the most destructive introduced species by the UK Wildlife Minister.

What Are Muntjac Deer?

This tiny deer species is also known as Reeves’ or Chinese muntjac deer and they are native to south eastern China and Taiwan. They are one of the oldest deer species in the world and it is thought that they have been around for as long as 35 million years. They only grow to be around two foot tall and weigh between 25-40 lbs as full grown adults. They sport a glossy russet brown coat in the summer that changes to a greyish brown during the winter months. They live around sixteen years and are mainly solitary animals or are sometimes to be found in pairs, although groups of up to ten can be found grazing together. The bucks have sharp, pointed antlers and are also equipped with tusks. They are very territorial and will bravely defend their small territory in order to stop other bucks mating with the does. They are very successful breeders, as the does are ready to mate at eight months old and after a pregnancy lasting a mere seven months, can produce a single kid at any time of the year. Once they have given birth, they will mate again within a few days, so are almost constantly pregnant.

They are also known as barking deer, because they bark during the night and can sound very much like the barking of a dog. If one of these deer is scared or alarmed, they can also let out an ear splitting scream. They can be very hard to spot in the wild because of their small stature, as they can easily conceal themselves in undergrowth, brambles and long grass. So you could have passed by a muntjac or even have one living close to your home without even being aware of their presence. They are most active at dusk and dawn, although they are on the move throughout the whole twenty four hour period and are most likely to be out in the open during the hours of the night.

How Did The Muntjac Arrive in Britain?

The first muntjac deer were brought to England from southeast Asia in 1900 by the Duke of Bedford to ornament the park of his great estate of Woburn Abbey. They started breeding on the estate and, almost inevitably, during the 1920s some of the deer escaped and started breeding in the wild. They quickly spread across much of the country and are now even beginning to push into the lowlands of Scotland. There are conspiracy theories that some muntjac were purposely released in certain places, and that they haven’t all been escapees. 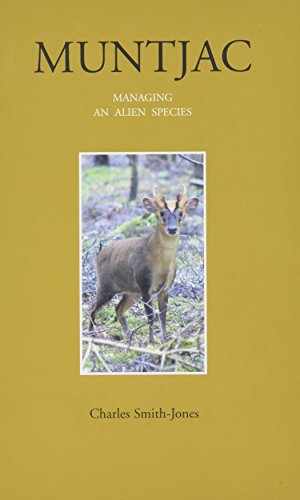 What Makes The Muntjac So Destructive?

So why have these diminutive deer become as hated by some people as they are and regarded as a dangerous pest? Well one big problem is that they have voracious appetites. Muntjac deer can munch their way through farmer’s crops, suburban gardens, woodland and hedgerows. In gardens their absolute favourite is roses, which can be very distressing and annoying to keen gardeners as well as being very expensive for them. Unfortunately, about the only way to keep the muntjac out and protect your flowers is to build a fence too high for them to jump, which is not always practical. But it is the destruction that they can wreak in woodlands and the countryside that is so damaging to the environment. If they get into managed coppiced woods, they destroy many of the new shoots, which make it difficult for the trees to regenerate and grow. Their destruction of the undergrowth is thought by the RSPB to be one of the most important factors in the declining numbers of ground nesting birds. This mass destruction of plants also means that insects lose their habitat, and their behaviour is threatening some of our rarer British species like dormice, nightingales and bluebells.

The muntjac deer are also a huge hazard on British roads, and it was calculated that in 2010 these tiny deer caused around 42,000 traffic accidents. These accidents happen mainly at night when the deer wander into the road, as many people drive too fast and these animals are not very good at getting out of the way of cars

What Is The Size of the Muntjac Population in the UK?

So how many muntjac deer are there in the UK today? Back in 1963 there were only an estimated 2,000 of these deer in the country, but this number has exploded over the years to more than two million. Some of the reasons the muntjac population is expanding so rapidly is that they have no natural predators here in the UK, there has been a growth of woodland areas, fewer people are hunting deer and we have been experiencing warmer winters. One of the problems is that in the UK the deer do not belong to anyone. In other countries they are legally public property, which puts an onus on the State to manage their numbers and cull where necessary. In the UK it is legal for a landowner to shoot muntjac deer on their property if they so wish, but they are not in any way obliged to do so and are not responsible for how many deer there are on their property. This lack of ownership of the deer only helps to ensure that the problems caused by their growing numbers are not addressed or any solutions found.

Are There Any Solutions?

Deer experts believe that, even if we wanted to, it would be very difficult, if not impossible, to totally eradicate the muntjac from our countryside. However, one of the solutions would be to have regular, properly organised culls. Apparently young muntjac deer is very tasty venison, so more hunting for meat could be one of the solutions, and using the deer for food might be more acceptable to many people than a straight cull. Any solutions that do not involve killing at least some of the animals, would be very difficult and difficult to implement. Any programme of contraception or sterilisation, would involve capturing animals, surgery or medication, and then tracking the animals afterwards. It would be a gargantuan task to capture more than a fraction of the deer, and the costs would be totally prohibitive. Another answer could be to introduce a predator that would keep the numbers down, as they do not have a natural one in the UK. This would also be fraught with difficulties, as people would be very resistant to having large predators roaming the countryside again. It would also have to be a predator that was once a native species of the British Isles. The obvious contender would be the wolf, and though there are moves to reintroduce wolves into the Scottish Highlands, it would be another matter entirely to have wolf packs hunting in the New Forest once more.

But although the muntjac deer are a highly destructive invasive species, we must also remember that they did not ask to be brought here and that they deserve to be treated with humanity and respect like all animal species. If it is decided that they need to be culled then this must be done as humanely as possible and cause as little distress to the deer as possible. Also if hunting them for venison is going to be encouraged, then it must also be regulated so that those doing the hunting have the experience and knowledge to kill the deer with as little suffering as possible. Invasive species are always going to be a challenge and a dilemma as to how best to deal with them, but there needs to be a fair balance struck between protecting the local ecosystem and the welfare of the invasive animals.