NATO: The Way Out of Afghanistan 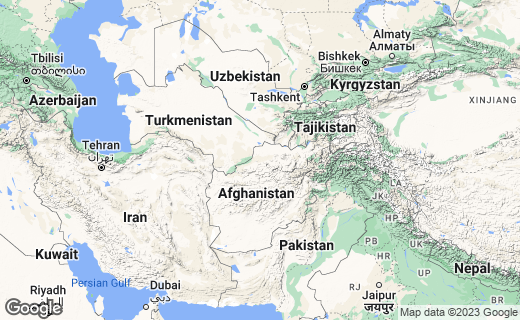 NATO is looking for a way out of Afghanistan. No, literally, they are looking for a way out of Afghanistan. They've been there 11 years and have accumulated a lot of stuff in that time and, as 2014 approaches, a lot of stuff has to be moved out. Only troops and weapons are airlifted in and out of landlocked Afghanistan, as this is extremely expensive and there is only so much capacity. The main ground route into and out of Afghanistan is through Pakistan, what the military, in its inimitable fashion, calls PAKGLOC, or PAKistan Ground Lines of Communication. When NATO airstrikes killed Pakistani soldiers in November 2011, Islamabad closed this route down.

Routes Out of Afghanistan

Since then, most “non-lethal” supplies and equipment have arrived in Afghanistan via what is called the Northern Distribution Network, or NDN. This 3,100 mile network of seas, roads and rails is already expensive, time-consuming and subject to physical and political realities. The countries involved are Georgia, Azerbaijan, Kazakhstan, Uzbekistan, Kyrgyzstan, Tajikistan, Latvia, Estonia and Russia. Via this network, supplies start their journey either in a Black Sea port in Georgia or the Baltic Sea port of Riga, Latvia (or, to a lesser extent, Tallinn, Estonia). The realities include dictators, support for Iran, fear of Iran, fear of spreading extremism, the NATO missile shield, poor infrastructure, the constant loading and offloading of goods between ships, rail and trucks, et al. Russia, the main player, sees NATO at its front door in the Baltic countries and its backdoor in Afghanistan (and in its basement in the other “stans” in Central Asia-- all former Soviet Republics). On the other hand, they don't want all that NATO equipment falling into the hands of the Taliban or other extremist groups. They would prefer that NATO wipe out the Taliban then get the hell out, otherwise, the Russians see themselves worrying about Afghanistan... again. It's not like anything is black and white here.

While the port of Riga, Latvia handles most of the cargo destined to and from the Russian rail network, the port of Tallinn, Estonia has seen a dramatic increase in its share of NDN cargo. In 2009, Tallin's transit flow was 1,500 tons; just two years later, Tallinn handled 250,000 tons.

NATO would much rather use PAKGLOC than NDN. The average cost to ship out a container via Pakistan is $7,200 and it doesn't take as long, while shipping it via the Northern Distribution Network costs $17,500. As the deadline of 2014 looms, costs will go through the roof. Already deals for bases in the “stans” are being renegotiated-- upwards, way up.

NATO find themselves in a bind. Not only do they not want to arm the Taliban-- sorry, the Afghan Army-- more than is necessary, hard times are upon us all-- even the military. Chump change like a billion here or a billion there is suddenly needed elsewhere, so the military forces of the various countries are watching their pennies. It is estimated that 130,000 soldiers, 70,000 vehicles and 120,000 containers must be moved out by 2014. They are quite aware of Afghanistan's history with invaders. When Britain withdrew in 1842, almost none of the 17,000 troops made it out alive. The Soviets had to fight their way out in places-- and their exit was a factor in the collapse of the Soviet Union.

US and Pakistani Generals

The actual exit for NATO is being carefully studied and it includes one of the most effective weapons in their arsenal: public praise for former bad-guys, selective amnesia and mega-lucrative contracts. Kyrgyzstan is threatening to not renew the lease of its airbase to the US in its capital, Bishkek. US Defense Secretary Leon Panetta visited there in March, 2012, to tell them how important they are. No one yet knows how much the lease will increase. Uzbekistan's dictator, whom the US cut off relations with in 2005 when he brutally suppressed an uprising, has had conversations with President Obama and visits from Secretary of State Hillary Clinton and others. Clinton recently announced Uzbekistan has made progress on human rights issues and trade barriers will be lifted. If all is well in Uzbekistan, they may also find that some of the transported equipment may “fall off the trucks” including armored vehicles, small arms and other equipment and perhaps even drones.

That doesn't sit well with Russia, whose leadership, up to the recent elections, had been beating the drum about the evils of NATO, how NATO was encircling Russia and how NATO wanted to set up bases inside Russia. But now that elections are over and there's real money to be had, they are telling the aroused public to cool it a little-- NATO just wants to pass through, not set up camp, for crying out loud. The missile defense shield NATO wants to deploy in Eastern Europe? The way the West treats Iran and Syria? Different subjects. Pay attention people. Negotiations are even underway to include the airport at Ulyanovsk, Russia in the Northern Distribution Network. Ulyanovsk, the birthplace of Lenin, is a depressed area and it sure would appreciate the business.

Apparently Pakistan is reconsidering its stance. In May, 2012, it offered to allow NATO passage through its territory-- for only $5,000 a truck. NATO declined this offer. Presumably the price of outrage and indignation continues to be negotiated.

In the meantime, discussions continue in all the various capitals, meaning the price has not been decided. The individual countries have to carefully negotiate the most they can get without driving NATO to competing routes. The one thing in their favor is that there aren't that many routes-- and Russia is the biggest player since nearly all routes traverse their land or air space. Of course, sooner or later the dollar amount for safe passage may very well prompt the Pakistani's to say, “Oh, well now, let us let bygones be bygones”. Then we'll see who our friends really are.

In May, 2012, Pakistan reconsidered its stance and offered to allow NATO passage through its territory-- for only $5,000 a truck. An estimated 200 trucks crossed the border daily before it was closed. NATO declined this offer.

In July 2012, both sides “relented”. The U.S. apologized for killing the 24 Pakistani soldiers in November 2011 and the trucks started moving. The U.S. will not stop drone attacks and will not pay any more than the $250 transit fee per truck it was paying before the closure. News accounts therefore indicate Pakistan got its apology and that's all.

On an “unrelated” note it appears $1.1 billion in military aid to Pakistan may soon be freed up. Also, no word on any additional “fees” or monies that may find their way into Pakistani pockets, but don't expect the Northern Distribution Network to go away. For now, though, the NDN may have to look into lowering their prices, because, after all, business is business.

In June, 2012, Russian Prime Minister Dmitry Medvedev signed a decree that allows NATO to use 'combined transit' routes for moving weapons and military hardware into and out of Afghanistan, instead of just 'ground transit'. Combined transit allows rail, road and air routes. The use of Ulyanovsk Air Base has still not been decided, due to fears that it might become a defacto NATO military base on Russian soil.

Russian Prime Minister Dmitry Medvedev signed a resolution on May 18, 2015 revoking the agreement which allowed NATO shipments, including military cargo, from passing between Afghanistan and Russia.

Although the military mission in Afghanistan “ended” in 2014, some 13,000 coalition troops remain in the country, still needing supplies and with plenty of equipment still to be removed.

The Russian resolution cited the fact that the original agreement had expired in December 2014. Could the fact that tensions between the West and Russia over Eastern Europe have been a factor? More surprising is that, despite Russian support of Ukrainian rebels, Russian threats to the Baltic countries and NATO's threatening response, the Russian corridor wasn't closed off long ago. Could the real reason be that, with NATO winding down the mission in Afghanistan, transit fees had dwindled enough to warrant poking the West in the eye?

And would it be so surprising to see Pakistani transit fees mysteriously soar?