America’s current standoff with North Korea, is dangerous, complex, and replete with poor options for resolution. Recent diplomatic efforts by both sides has eased the tension, for the moment, but North Korea still poses a far greater threat than most people realize. The United States is in a high-stakes game of chicken with the rogue nation. If diplomatic efforts fail, there will be significant consequences for each side.

Should war break out in North Korea, the scope would be beyond any war to date. Millions, perhaps tens of millions of people would die. All North Koreans are taught from a young age that America is evil and will attack the North. Citizens are told it is their duty to fight to the death to save their country. It should be anticipated that many will do just that. Anyone over 17 has had military experience, since all North Koreans are required to serve in the military for 3 years. The civilian population is trained to fight.

While American’s think the entire world is against North Korea and that all countries abide by UN sanctions, this is not entirely true. The North’s allies are often the same countries that present challenges to the United States, such as Iran, Syria, Cuba, Yemen, and Somalia. North Korea circumvents sanctions through barter exchanges of goods and technology.

Iran and Pakistan are known to have collaborated on nuclear and missile technologies with North Korea. A shipment of chemical weapons produced in North Korea was seized on route to Syria. The missiles being launched at Saudi Arabia from Yemen were built in North Korea. The government in Pyongyang are known to have re flagged ships under the Tanzanian flag to avoid them being stopped and searched. Sanctions have had a significant impact on the North, but there are other rogue nations willing to partner in trade.

North Korea has vast network of bunkers which can shield large portions of its population. They can wait out an American attack and then counter-attack when the opportunity is best. A significant portion of the population will survive any initial American attack. The North has feared an attack and as such the government runs frequent emergency drills.

Missiles and nuclear weapons allow the possibility that any war in Korea may reach the American mainland. Civilians in the U.S. are soft. They are often not aware of or directly impacted by ongoing U.S. military engagements. There is a significant threat that there will be attacks upon U.S. territories and that civilians will die, even if the missile and nuclear threats can be neutralized.

If North Korea lost its ability to strike the U.S. mainland, it could choose secondary targets belonging to American allies in Japan and South Korea, or American troops in the region.

North Korea has the second largest submarine fleet in the world, after the United States. While technologically primitive by today’s standards, they have proven themselves to be both elusive and effective. Even without missile capability, North Korea’s submarines could pose a significant threat.

A submarine does not need to be able to launch a missile to be a nuclear threat. The submarine itself could serve as the delivery system. A nuclear weapon could be carried on the submarine into San Francisco Bay or Long Beach Harbor; surface and detonate the weapon in a kamikaze inspired mission. There is an ongoing hunt for North Korean submarines along the Canadian and American west coasts to help counter this risk.

Although North Korean terror attacks were mainly constrained to the 1970s and 1980s, terrorism is still a weapon in the North’s arsenal. Given that the North has chemical and biological weapons, such an attack could be devastating. It is estimated the North already has up to 30,000 secret agents in the United States.

There is little doubt that a true resolution is not found, the technology currently available to North Korea will increase in sophistication. There is also little doubt that this technology will be sold to others for profit. Failure to act today would leave the world far less safe tomorrow.

If America does act militarily, it must commit to a long and horrific war. The U.S. will, of course, win any war with the North but the costs in terms of world opinion, military lives and financial commitment will be staggering. There is also a high risk that any war has the potential of expanding to China and Russia, both of which border North Korea. The North has strategically placed its nuclear and missile programs close to these borders. Any miscalculations in attacking these sites could provoke these more powerful nations to become engaged in the conflict.

For the moment, both sides have, through diplomacy, been granted a break from an unwinnable game of chicken. Neither country can afford to dangers posed by the other if diplomacy fails.

All photos used in this article are public domain. Video was created by PBS News

Is North Korea Being Deceptive or Truthful?

Do you believe diplomacy will succeed in improved relations between the U.S and North Korea? 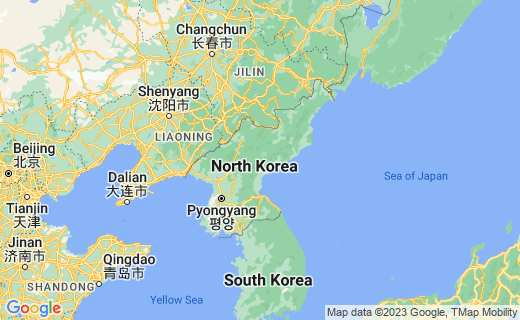 Do know have what it takes to pass this quiz? Give it a try.