North Korea's hidden submarine threat is worrisome as the regime warns it's ready for war. The North is known to have at minimum, 70 submarines. At 70, North Korea has the second largest submarine fleet in the world. It is only surpassed by the United States. The quality of those submarines is low in comparison to other navies but the quantity of submarines and the experience of their sailors, which averages 10 years, is still a threat.

The bone-chilling thought of North Korea's submarines firing a nuclear missile is a real possibility, although they do not seem to have this technology perfected yet. There are fears the North Korean dictator is adapting his fleet of subs, so they can fire warheads amid heightened tensions with the West. Kim Jong Un knows his ground-based missiles are attack, sabotage, and detection at launch. Submarine based missiles provide an option for a second-strike ability if the ground missiles are destroyed.

The is some evidence that submarines may be being retrofitted. Satellite images taken by U.S. satellites show what appear to be missile tubes being installed on some of these vessels. It is possible though, that these tubes are decoys created to frighten or confuse the world. Submarine based launches require a great deal of skill and knowledge that North Korea does not likely have at this time. In time they will develop this capability. The North has stolen plans for more advanced submarines from South Korea and is said to be in the process of mass-producing them at this time.

North Korean subs have already proven to be elusive. Recently, 50 North Korean Submarines disappeared off radar generating panic in South Korea and Japan. These submarines must be tracked. The inability to locate 50 submarines, even for a short period of time, is very worrisome because they may very well carry nuclear weapons in the future.

Kim Jong-Un likely does have the ability to fire missiles tipped with sarin. Sarin is the same deadly gas used to kill 87 Syrian civilians in a shocking gas attack. There is a strong possibility that North Korea already has a capability to deliver missiles with sarin as their payload.

According to Daniels, Jeff, 2017, “the nuclear attack threat from a North Korean submarine is one of the nightmare scenarios facing Japan and South Korea. Pyongyang has made major advances in weapons in recent years and shown a willingness to use its submarines for offensive military actions.”

In 2010 the North Korean Navy sunk the South Korean Cheonan navy ship by means of a submarine torpedo attack. That incident killed 46 sailors and wasn't the first time the reclusive North had made incursions into South Korean waters.

Do you consider North Korea's outdated submarines to pose any real threat?

The THAAD anti-missile system deployed in South Korea is designed to identify ground-based missile threats from the North. A submarine missile could be launched behind the radar and completely evade defense systems. Detecting the subs has become a challenge. North Korean submarines have proven to be evasive.

Even without missile capability, North Korea’s submarines could pose a significant threat. Acting in concert, they could carry out a sustained torpedo attack on one of the American aircraft carriers in the region. During World War 2, the Japanese battleship Yamato was the heaviest and most armored battleship ever constructed. It was thought to be unsinkable, but a sustained American attack focusing all attacks on one side of the ship, forced it to capsize and sink. A similar strategy against an aircraft carrier, using all available North Korean subs could produce a similar result.

A submarine does not need to be able to launch a missile to be a nuclear threat. The submarine itself could serve as the delivery system. A nuclear weapon could be carried on the submarine into San Francisco Bay or Long Beach Harbor; surface and detonate the weapon in a kamikaze inspired mission. There is an ongoing hunt for North Korean submarines along the Canadian and American west coasts. Each submarine also carries agents whose job it is to ensure missions, even suicide missions are carried out. They also have the ominous job of executing the crew and killing themselves to avoid capture.

How Much Do You Know About North Korea? 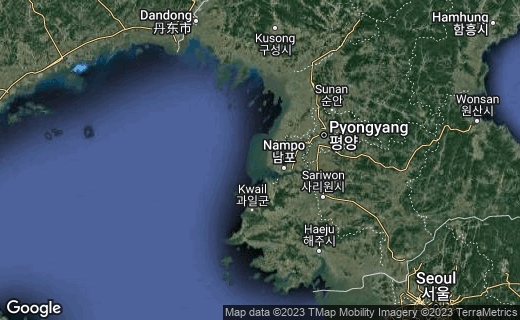