Oliver Cromwell (25 April 1599 – 3 September 1658) There is a strongly held local belief and some evidence that he was in fact born in the market town of St.Ives in Huntingdonshire. Which is now part of Cambridgeshire

The East Anglian town of St.Ives, was a stronghold of the Cromwell family. There is a Blue Plaque, stating that Oliver was indeed born at his Uncle's home, Cromwell House which is in the centre of town.

The current house, stands on the site of the former, House of Austin Friars, founded circa 1285.

When comparing the characters of Oliver Cromwell and King Charles the first.

The thing that becomes apparent, is that both had what many would consider today, extreme belief systems.

Charles was an Absolute Monarch. He believed that he had been born with a divine right, directly from God no less; to rule Britain.

Cromwell had an strong belief based on his Puritan upbringing, that he was on a quest to save Britain from a tyrannical king.

When Absolute Monarchy met Religious fundamentalism. It was a recipe for revolution. The effects of which are still with us today.

Cromwell house in St.Ives, was formerly church property and 'granted' to the Cromwell family at the Dissolution of the Monasteries (1536 and 1541)

Today it is a Grade II listed building and used as a care home for the elderly, and private housing.

Oliver came from a moderately wealthy background. His ancestors had made the families finances secure, by being on the right side, during the Dissolution of the Monasteries.

King Henry VIII (28 June 1491 – 28 January 1547) attempted to weaken the power of the Catholic Church in the UK by seizing it's assets. (churches, monasteries and farmlands)

The usual interpretation of these events, is that the Pope wouldn't allow Henry VIII divorce.

In reality, there had been a long history of dissent against the Catholic church in England, prior to Henry VIII's decision to break away from the power of Rome.

The Pope misread the depth of feeling in Britain, and set the scene for centuries of bloodshed that lasted until the late 20th century.

These events influenced the Cromwell family over generations and by extension the young Oliver. His indoctrination into a particularly virulent form of Puritanism would play out the full horror in later years, with the English Civil War and mass murder during the conquest of Ireland.

In the process, his ancestral family managed to get their hands on huge tracts of land, church buildings and a wide variety of farming, and other business assets.

He changed his surname to Cromwell, when he inherited his Uncle's wealth, in recognition of the bequest. He felt he had a destiny to fulfill.

Prior to his inheritance Oliver led a relatively quiet but moderately prosperous life in the chicken and sheep farming business.

He never really got involved in anything political until he was in his 40's.

Should this statue of Oliver Cromwell be taken down?

Causes of the English Civil War...Taxes

Oliver had been leading a quiet life, until King Charles I decided; that he wanted to raise taxes, to finance a war he was planning, against France and Spain.

King Charles I had already introduced a very unpopular ship tax, on freight entering and leaving the UK.

The King, thought it might be a wizard wheeze, to impose a land tax on the wealthy land owners; of this fair isle.

Well you know that is never going to work out well. These new taxes, had the potential to make things very costly, for anyone with land.

Oliver's uncle we can assume, was not best pleased; with the prospect of having to throw money, in the Kings direction.

Whilst all these shenanigans were unfolding, Oliver fell on slightly hard times and moved back to a modest home in St Ives, Cambridgeshire.

It was during this period that Oliver had a religious transformation and revelation.

Oliver had been raised in a Puritan protestant household and during his time of hardship, developed a strong Puritanical conviction.

God wanted him to free England, from the tyranny of the Monarchy. To say that King Charles 1 was unpopular would be an understatement. In a few short years he managed to annoy just about everyone in the realm.

He started by marrying a Catholic woman Henrietta Maria.

They were married on 13 June 1625. In fact, the North American Province of Maryland was named in her honour.

King Charles I followed the well worn path of divine kings, and demanded money from parliament for a war he was planning.

Parliament would not agree and so Charles closed down parliament and sent them all home.

Parliament in those days was not what it is today. They only met once in a blue moon or every 5 years, whichever came first.

Parliament was made up of landed gentry and the monied classes. (almost 100% exactly like today).

When Charles wanted to finance a war or build a new palace. Parliament was supposed to just pay for it, he believed he was entitled, he was the King, ordained by God to spend the countries money as he saw fit.

These arguments continued for many years, with Charles throwing more of his toys out of the pram.

Parliament meanwhile getting bolder and tougher, as things got steadily more out of control.

Royalist Cavalier's not really Battle Dress is it?... Losing

The Dictator The Rump & Regicide

Some would say, that King Charles I had it coming. He was deluded and believed that he was ordained by God to rule.

He was up against an increasingly affluent, land owning class; who were not keen on the king telling them what to do, with their money.

It can be argued that Oliver Cromwell was also deluded. As a puritan, he believed that the more successful he became, showed him that God was smiling on his endeavors.

The New model Army was made up of the ordinary people of England. Mostly peasants and tenant farmers and several large land owners, who were sick to death of the tyranny and taxes of Charles.

The difference that made them successful was basic but effective discipline on the battlefield.

Whereas the Cavaliers cavalry would charge, and when they would rout a Roundhead position, they would go on their merry way looting and pillaging the local towns and villages.

The new model army on the other hand would regroup and reform for another attack.

So basically the new model army won most battles, simply by consistently 'being there' whilst the Royalist Cavaliers, would be off robbing the camp followers and baggage train.

It may seem odd to us today but these simple tactics proved very effective. To win a war you have to be there or as we say these days. You need 'boots on the ground'.

After many years of war, the Parliamentarians (the Roundheads) using superior and disciplined battle tactics beat the Royalists (Cavaliers) and King Charles I was eventually beheaded.

A particularly obscene method of killing with symbolic overtones. No one is above the law. Not even a King.

Oliver Cromwell presided over the gradual collapse of Parliament, and was named Lord Protector of the Commonwealth of the United kingdom.

"the people of England" a "Commonwealth and Free State by the Supreme Authority of this Nation, the Representatives of the People in Parliament ... and that without any King or House of Lords".

The previous success of the morally attuned new model army against what he perceived to be rapscallions fed into Olivers' belief that he was being guided by God.

He dispensed with Parliament altogether, as they did not seem able to agree on anything. He would take charge.

Cromwell retained just enough people to run the government, with the Establishment of the Bare-bone's Parliament: in 1653.

During his time in power, he began to be referred to as your highness, and even signed his name Oliver P for Protector, much as a King would sign their name, Charles R for Rex.(from the Latin for king)

Oliver Cromwell died on the 3rd September 1658, after several months of ill health and was buried in Westminster Abbey. A place usually reserved for Poets, Kings and Queens.

The restoration of the Monarchy under King Charles II, led to Oliver Cromwell's body being exhumed, hung, and chopped up.

His head stuck on a pike outside of Westminster Hall (Houses of Parliament) where it stayed for over 26 years.

Eventually the pike broke during a storm. Oliver Cromwell's head, went through many, object de macabre, dealers hands in the following centuries.

It was finally buried at his Alma Mater, Sidney Sussex College, Cambridge in 1960.

Separation of Church and State

The historical importance of Oliver Cromwell cannot be underestimated.

The archaic belief systems of both Charles I who believed he was owed a living because of his birthright, and Oliver Cromwell's 'divine' intervention with the Parliamentarians, led eventually to the separation of church and state in Britain, and eventually to most countries of the world today.

Oliver Cromwell was driven by a desire to do what he thought was the right thing. Like many fundamentalists today. They believe they are right...therefore everyone else is wrong.

Charles I was driven by a belief that he was entitled to privilege ordained by God no less.

These two opposing forces could only end badly.

Today in Britain, we have another Prince Charles in line to the throne. He has married a 'divorced catholic'.

Many people in Britain believe, that Prince Charles will never be King and that the succession will pass to his son Prince William.

The power of the state is such these days, that it is unlikely that we could have another civil war in England over the role of the Monarch.

We do still have religious fundamentalism which is pernicious and eating away at the rationalist views of society.

There is always the danger that when the people's needs are ignored by the privileged few and religious zealots are allowed to run riot. No one is safe. Not even a King.

Oliver Cromwell was England's first Dictator. In true dictator style, he handed power to his son. Not being half the man his father was. He son was deposed within a year.

The English Civil war was a defining moment, not just in English history but has defined World history ever since.

Many of the ideas that we take for granted today, were fought for during the English Civil War.

Ideas like, the right to follow your own religions beliefs and not have someone dictate how you practice or interpret your faith.

The concept that all people are equal under the law and that no one (even a king) is above the law.

Just about every aspect of our current daily lives were fought for and formulated in this epic period.

The protest that we see around the world today echo these ideas. The desire for freedom from tyranny is as alive today as it was back then.

What happened to the puritans you may ask?

They left Britain bound for the country that would eventually become the USA. 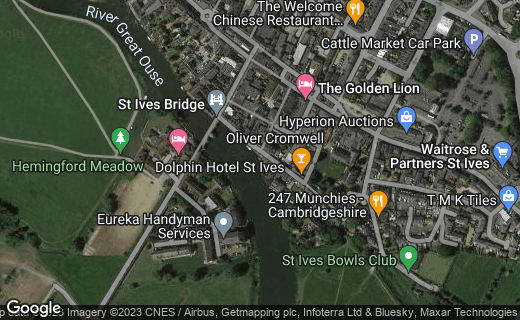