Earlier today I was reading a hub called Partition America, by James A Watkins, who proposed dividing the United States of America into two separate countries based on Red/Blue political divisions. I disagree vehemently with Mr. Watkins on virtually everything, and take considerable exception to his (frankly vile) misrepresentations of liberal political philosophies, but on this issue, I actually find myself increasingly in agreement with him.

As the summer wears on and turns to autumn, I find myself more and more depressed about the state of the country. After eight years of a president whose policies I detested, I had really been looking forward to a break, a little relaxation from what had been a seemingly neverending cycle of despair as President Bush threw everything I loved and valued about America, from our civil liberties to our beautiful wilderness areas, under the bus in pursuit of policies that ranged from the stupid and misguided to the actively criminal.

Instead, the country has been taken over by blithering idiots, the sort of people so willfully and maliciously ignorant that they show up at town halls to protest health care reform waving signs that say "Keep government out of my Medicare," the sort of people so violent and paranoid that they show up at Obama rallies with guns, and signs proclaiming "It is time to water the Tree of Liberty."

It seems increasingly likely that the extreme divisiveness of political discourse in this country at the moment is going to end in blood, so perhaps Mr. Watkins is right.

Maybe we really would be better off if we simply shook hands and agreed to go our separate ways.

How many separate ways, though?

Mr. Watkins proposed two, based on the Red State/Blue State divisions dictated by the electoral map, though he divided the country somewhat curiously according to the 2004 electoral map rather than the 2008 map. Perhaps he doesn't like to be reminded how much of the country Mr. Bush's policies ended up alienating.

Regardless, however, I consider such a simple division into red and blue to be rather inadequate. The United States may indeed be split into two increasingly divisive camps, politically, but it is not split neatly along state lines. Instead, in most parts of the country, liberals and conservatives are all mixed in together to create one giant purple vision of the United States of America:

I think a more reasonable approach to dividing up the United States would be to take a bioregional approach to the matter.

Bioregionalism defines different regions by looking at the ecological and cultural characteristics of an area rather than a bunch of arbitrary lines drawn on a political map. I've always suspected that the world would be a more pleasant place in general if people had paid more attention to the principles of bioregionalism when they started dividing up the world into countries. To take a very obvious example, look at the British division of the Middle East after World War I. Iraq might not have collapsed into such brutal civil war when Saddam was removed had the British only taken the region's ethnic makeup a little more carefully into consideration.

America is no exception. The sharp differences in culture and industry between the North and South were already evident during the US Civil War, when the North's higher degree of industrialization played a major role in its victory. Today, the US can be divided into even more distinct regions.

An early attempt to identify and name these regions was done by Joel Garreau in his book the Nine Nations of North America. Although the book is nearly 30 years old, it remains surprisingly relevant to the United States today:

Garreau offers one of the best and most practical ways to divide the United States into smaller nations based on local ecology and culture. A loose confederacy of smaller nations, similar to the European Union, could enable Americans to make peace with each other's differences while offering a greater degree of choice in governing structure and lifestyle. Garreau's nations even take into consideration some of the biggest in-state cultural divisions; for example, the wide gap in political philosophies and lifestyle between the residents of Eastern and Western Washington state, or Northern and Southern Illinois.

In "Beyond Red and Blue," Commonwealth Magazine offered an alternative to Garreau's Nine Nations, focusing specifically on the US and dividing it into 10 specific regions. Though not as practical as Garreau's nations due to the geographical separation of different parts of some regions, it still offers an interesting view of a possibility of a United States divided yet at peace.

Another recent thought experiment by Neil Freeman of Fakeisthenewreal.org postulated a United States where state boundaries were reconfigured periodically according to population shifts. It is based on a division of the country into 50 states with more or less equal populations of about 5 to 6 million each, and it seeks to preserve existing boundaries where possible. 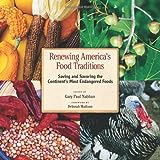 Other bioregionalists work from the perspective of specific aspects of culture or ecology.

One of the most interesting recent examples is Slow Food USA's map of the "food nations" of North America, which focuses on regional food traditions and is explained in the fascinating book Renewing America's Food Traditions: Saving and Savoring the Continent's Most Endangered Foods.

Environmental scientists also have a competing set of "ecoregions" developed by the World Wildlife Fund and the United States Environmental Protection Agency respectively, which were created to improve ecological management programs. Here is a map of the Level I ecoregions (there are four levels total) of North America as developed by the EPA:

Bioregional understandings of place are already commonly utilized among sustainability activists. An example is Ecotrust's Salmon Nation project, which uses bioregional principles to educate residents of the Pacific Northwest about protecting their watersheds to save the wild salmon.

"One nation, indivisible" is rapidly becoming "one nation, divided." Perhaps the time has come to apply the principles of bioregionalism to political boundaries as well as ecological and cultural ones.