Who Diffused The "Population Bomb"! 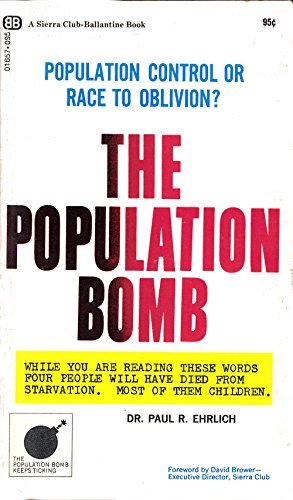 Perhaps no one has stigmatized poor people more than the 18th century English cleric-cum-philosopher Robert Thomas Malthus. He saw them as mere food eating morons who produced more babies than they should. He theorised that if their population growth is left unchecked it could create a scenario of mass starvation where the earth couldn’t produce enough food for the increasing number of mouths. His theory found strong favour with class conscious elites of the late 18th or early 19th century world. An image where too many hungry souls are chasing a limited food supply caught their fancy.

I seriously wonder why he did not recommend lifting the poor out of poverty; that being a priest should have come naturally. But that’s beside the point.

Even in the post WW2 world 150 years later, few stopped to check the relevance of his logic in a much changed world. In the English society of Malthus’ time, celibacy was perhaps the only form of contraception available and medical science was in primitive stages; no one could have imagined that economic and social development and promotion of education also affect the reproductive behavior of people. Of course, things like women empowerment and the role of women education on fertility were too advanced subjects for the primitive English society of his period.

Gripped by the fear of rising population of the poor countries, the “first world” politicians introduced the overpopulation phobia into international aids to the “third world” countries by connecting aids to population control targets. They were imagining nightmares: if the rising population of poor in the “third world” eat away the limited food stock of the planet their citizens would starve! India’s case presents a typical example of how the politics of family planning was played out in the 1960s and 1970s.

Population phobia was so strong that, in the late 1960s Paul Ehrlich wrote a book – The Population Bomb – where seeing the large population of India he advocated “sterilization of all Indian males with three or more children” ! It was also the decade when the phrase "population bomb" was coined in a presidential election campaign in the US.

Many in the Western world still live under Malthusian fear of rising population in rest of the world. They have no idea that the Malthusian fear would now remain just a paper dream because it is no longer the same world!

The world entered the 21st century with all round falling birth-rates and rising economies in most of the developing countries outside tropical Africa as shown in the image above. While China brought down fertility rates rather sharply (often credited to its One Child policy), populous India also ushered in a regime of falling fertilities on the strength of sustained economic and social development. Besides, much of the North America, Europe, East Asia and many nations are seeing unprecedented low fertility levels.

Of course, corporate media is blind to unglamorous topics like population, fertility rates or poverty. Since its activities revolve around the elite class, media continues to live in the Malthusian era and still believes that population of the poor and developing countries would continue to rise till eternity. When ideas get ossified in the mind as eternal truths, people fail to notice the obvious changes around them.

However, if today the speed of light is no more the ultimately achievable speed, how can the philosophy of seeing humans as food eating morons not change? The reminder comes in the form of a recent book “The Coming Population Crash: And Our Planet’s Surprising Future” by the environmental writer Fred Pearce. Fred decisively establishes that the overpopulation phobia is now groundless because the trend of falling fertilities is firmly established at the global level.

“Global population is at all-time high – slightly over 7.5 billion. In the past 100 years alone, world’s population has increased by 5 billion – it was around 2 billion in 1914. However, it may be surprising to know that over the past 3 decades, birthrates have fallen sharply around the world.”

The Scenario of Fertility Rates

In 2015, the global population is at all-time high – about 7.3 billion. 100 years ago, it was around 2 billion. Surprisingly, however, over the past 3 decades birth-rates have fallen sharply in the developing world. As a result, global population is expected to reach its peak (at about 10-11 billion) by the end of 2100, and then start to decline slowly!

Fifty years ago when Paul Ehrlich wrote his book, the average fertility was well over 5 children per woman which in 2010 is down to about 2.5 children and the fertility rates are still declining. Thanks to advances in medical science and easy availability of contraceptives women no longer need to have half-a-dozen children to ensure that two of them would survive to see the adulthood. As more and more women are taking their rightful roles in the society, they wouldn’t like to continue with the role of ‘breeders’ as the only thing in life.

Today, the story of high fertility rates is restricted to only tropical Africa, Afghanistan and in a backward country like Yemen in the Middle East. In most of the developing countries, birth rates have dropped steeply, and some are now well below the replacement rate, which is considered to be 2.1.

The fertility rates of China (1.55), Chile (1.85), Brazil (1.81), and Thailand (1.56) are now lower than the US, France, Norway and Sweden of around 2.0. With declining fertility rates, India (2.5) and Mexico (2.3) would also soon hit the target. Much spectacular is the case of Bangladesh: in just about 30 years, on the strength of social advances, it reduced its fertility rate to 2.2 which is lower than India’s 2.5. Communist China has a lesson here!

Even Afghanistan, the most fecund country outside of Africa, is showing the declining fertility trend, at least for the past 15 years. In Asia as a whole, where 60% humanity lives, birth rate has fallen to about 2.4 and declining.

Today about 60% humanity lives in societies with fertility rates below the replacement level of 2.1 children per woman. In the developing countries, where medical services are very poor birth-rates of 2.2 – 2.3 may also be taken as replacement levels. Thus, about 70% of the global population lives in countries with firm declining fertilities.

This trend of low and falling fertility is now a RULE, not exception !

So the overpopulation phobia of Mr Malthus, nurtured for two centuries, will remain just an intellectual nightmare and never materialize on the ground. Of course, nothing can stop people from remaining phobic if they want to!

What poses a bigger environmental threat?

The factors that led to declining fertility are all other than the standard prescription of controlling women’s fertility through government policies. They cite China’s “success” with the forced “One Child Policy” as a “shining” example, conveniently forgetting that it badly distorted the sex-ratio, and that democracies can’t impose such draconian measures on their people. They also overlook the success of other countries in equally short period without state imposed birth control; for instance, Taiwan, Indonesia, Thailand and more recently Bangladesh.

Perhaps the biggest factor is the advances in the reproductive medical care. It has not only made births much safer than 3-5 decades ago, but has also increased the availability of a variety of safe and convenient contraceptives. Governments throughout the developing world now make conscious efforts to facilitate spread of contraceptives and medical care.

The Cairo International Conference on Population and Development (ICPD) of 1994 gave an entirely different dimension to the “population problem.” Rather than seeing it as a fertility issue, it offered a wide-lens view of “people development” particularly of women and girls. It adopted the concept of “reproductive rights” and prescribed women empowerment as the vital developmental measure that would put the reproductive issue in the right perspective.

Increasing frequency of sudden climatic disasters such as the flash rains, sudden floods and landslide etc is a now a reality across the world. It is particularly a serious threat for the poor and developing countries. Natural disasters not only disrupt development initiatives but also pose grave threat to the poor population. It is known that such disasters take away more lives in the poorer nations than in the developed societies.

While “traditional development experts” remained preoccupied with the Malthusian fear of overpopulation fertility rates have fallen steeply in recent decades in most of the developing countries. Barring China, the decline did not happen because of the standard prescription of State control on fertility. Countries like Indonesia, Thailand and Bangladesh present examples of achieving effective fertility control through measures such as social development and women empowerment.

Today, over 60% of the global population lives in countries with sub-replacement fertility rates. The chances are pretty bright that by about 2100 global population would peak around 10-11 billion. Now we can definitely say that the Malthusian fear is no longer an issue to be taken seriously.