Estonians Gathering at Sinimae in the Past

On Saturday July 30, 2011, veterans of the 20th Estonian division of the Waffen SS gathered in Sinimae, Estonia with other pro-Nazi campaigners. Sinimae, a small village of 352 people, is in the far northeast of the Baltic state of Estonia near the border with Russia. The rally was held to commemorate the anniversary of of a fierce months-long battle fought there during World War II in 1944 between the advancing Red Army and the 20th Estonian SS division, resulting in total losses as high as 200,000. The rally occurred less than a mile from a monument commemorating the Soviet dead. There was also an anti-Nazi protest rally, but members of the anti-fascist movement said Estonian authorities hampered protestors trying to get to Sinimae by detaining them at the border or having the police pull them over.

The Russian Foreign Ministry complained that the Estonian government's tacit approval of such gatherings must be investigated by the European Union, NATO and other relevant international bodies to stop the growth of Neo-Nazism. Estonia is a member of NATO and, with a population of 1.34 million, is one of the least-populous members of the European Union. Russia maintains that the 20th Estonian SS division carried out punitive operations and that 7,500 to 8,500 Jews were killed in the concentration camp at Kluga. not far from Sinimae. 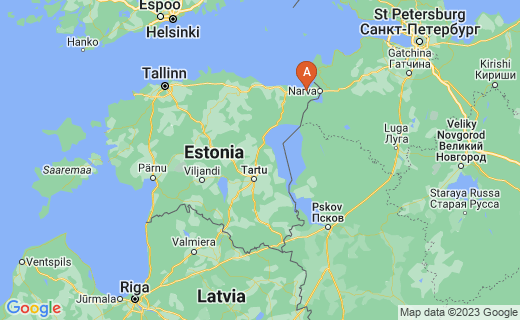 Some Estonians, however, look upon the German army as liberators and the 20th Estonian SS division as freedom fighters. After the non-aggression pact between Germany and the Soviet Union was signed in 1939, the Soviet Union occupied Estonia in 1940 until the Germans broke the pact and invaded in 1941. During that occupation, tens of thousands of Estonians were deported to Siberia or summarily executed and Stalinist “destruction battalions” terrorized the countryside. The Soviets reoccupied Estonia in 1944 and ruled over it and the other Baltic states, Latvia and Lithuania, until 1991.

Estonia's Foreign Ministry issued a statement declaring that “Estonia has condemned the crimes of all the totalitarian regimes that occupied Estonia and denounces any ideological manipulation of this topic”. Furthermore, the government maintains the right of all who fought during the war to commemorate their dead and that the event at Sinimae was a civic initiative.

This is the morally ambiguous landscape that has fueled the growth of the Neo-Nazi movement during the last 20 years in the Baltic states and is now spreading throughout Europe. In Austria, the ultra-right party won the parliamentary election; in Finland, the True Finns Party scored impressive results in recent elections; the far-right has also gained ground in France. Just over a week before, shortly after sending out his manifesto addressed to “West European patriots”, ultra-right-wing terrorist Anders Breivik murdered 77 people on July 22 in and near Oslo.

It must be noted that during the Nuremberg trials following the war, members of the SS were classified as war criminals, but conscripted members of the Estonian20th Waffen-SS division were explicitly excluded from this classification unless they individually committed war crimes.

Also, the U.S. Declared: “The Baltic Waffen SS Units (Baltic Legions) are to be considered as separate and distinct in purpose, ideology, activities, and qualifications for membership from the German SS, and therefore the Commission holds them not to be a movement hostile to the Government of the United States.”

On Saturday July 28, 2012, the Estonian veterans of the 20th Waffen-SS division assembled once again in Sinimae. In what is becoming an annual exchange of accusations, the Russian press accused the Estonians of glorifying Nazism, while the Estonian Foreign Minister accused the Russians of maliciously maligning their complicated past.

While Neo-Nazis do take advantage of the annual gatherings to further their cause, officially, this is a gathering of Estonian veterans who fought against Soviet invaders. The Russians see nothing but Nazis who killed millions of Russians during the war.