Did you know that hoofed animals cause a huge amount of damage in Australia and that they are all introduced species? The island continent of Australia enjoys one of the highest levels of biodiversity on Earth and is home to some truly unique and amazing wildlife species. This unique fauna and flora was able to evolve because of Australia’s isolation. The island continent had once been part of the supercontinent known as Gondwana, but around 45 million years ago it broke away from Antarctica and began drifting north towards its current position.

There are currently around 312 mammal species living in Australia and most of them are very different to the placental mammals found in the rest of the world as many of these species are marsupials, animals that give birth to very immature young and then nurture them in a pouch, and a small number are monotremes that lay eggs rather than give birth to live young. Any native placental mammals are those that could swim there, such as the whales and dugongs, or could fly there, such as the bats. The first land placental mammals to enter Australia arrived with the first humans. For example, we may think of the dingo as a truly native Australian species, but in fact it was introduced only around five thousand years ago.

However, Australia is also unique in that no hoofed animals ever evolved there and all of the many delicately balanced ecosystems developed without any deer, horses, cattle, donkeys, goats and sheep being present. No hoofed mammal ever set foot (or hoof?) on Australian soil until the First Fleet arrived in 1778 bringing with them seven horses, seven cattle and twenty nine sheep as well as the first batch of convicts. Over the years these animals were farmed and as their numbers grew, they were taken to different parts of the country as sheep and cattle stations were created. Unfortunately, it was almost inevitable that some of this livestock escaped or were even let loose or deliberately abandoned when times were tough. The populations of these feral horses, cattle, sheep and goats have grown over the years and are now spread over many Australian states.

Whereas cattle, horses, sheep and goats were introduced to be farmed for food or wool, during the 19th century deer were introduced as game and to make the Australian bush a bit more like the England the settlers had left behind them. It was a sentimental age and prosperous farmers and station owners wanted to try to recreate the English countryside and English cottage gardens in their own backyards.

There were even Acclimatisation Societies set up that were devoted to bringing animals and plants from Europe and transplanting them into Australia, and also sending Australian wildlife back to Europe. Luckily for the native species many of these introduced species failed to establish themselves, but there are still populations of deer in Australia and their numbers are growing. Donkeys were also introduced into Australia in 1866 for use as pack and haulage animals, as they were able to eat certain toxic native plants that grow in the Kimberley and Northern Territory that made the horses sick.

Feral donkeys are grazers and they eat large quantities of grass and shrubs and they also strip tree bark to eat. They can cover a lot of ground as they graze for many hours during the day, denuding fragile habitats of large amounts of vegetation as they go. They also spread weeds as they travel through the bush as the seeds get caught up in their manes and tails and also get excreted in their droppings.

Feral donkeys can survive quite happily in arid conditions, which is one of the reasons they can thrive in the harsh conditions of the Australian Outback. But they do need to drink and often damage water supplies used by native Australian species, especially in times of drought, when they crowd water holes rendering them unusable by fouling the water and damaging the banks.

There are now an estimated 400,000 feral horses in Australia, mainly spread across the cattle ranching regions of Queensland, the Northern Territory, Victoria and New South Wales. They can survive in a fairly wide variety of environments, but they prefer to live in areas where there is a plentiful supply of pasture and water.

Horses were among the first animals brought in by the European settlers and many of the feral horse populations have grown from escapees during these early days of colonisation. The first reports of horses that were roaming wild in the bush appeared as early as 1804.

When farming first began in Australia the livestock was grazed over open country without any fences being built, so horses escaping were a common occurrence. Just like the feral donkeys, horses were replaced in many cases by cars and trucks as they started to be used early in the 20th century leading to many of them being abandoned in the wild.

These Australian feral horses are also known as Brumbies and have been much romanticised in novels and TV programmes and indeed many of them are beautiful animals as they are descended from thoroughbreds and Arabians.

But despite their beauty and grace they are still major pests as they get into pastureland and eat the grass, they barge through fences and damage them, trample native vegetation and can also interrupt cattle musters on stations by scattering the livestock. They can also spread diseases such as tick fever, African horse disease and equine influenza to domestic horses. 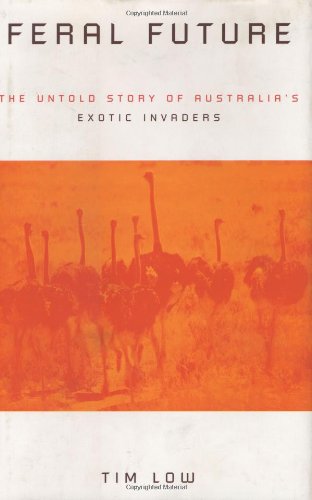 Deer are indigenous to all of the continents on Earth except for Australia and Antarctica, and all of the feral deer now living in Australia were introduced in the 19th century and early 20th centuries. Many of them were introduced by the Acclimatisation Societies and even Queen Victoria unwittingly contributed by sending a small herd of red deer to the state of Queensland in 1873 as gift after they named the state after her, which were subsequently released on the Cressbrook Station.

They survived and bred successfully and their descendants can still be found living in the area. Apart from the red deer, there are five other deer species that can be found in the wild in Australia today and these are chital, fallow, sambar, rusa and hog deer. In 1980 it was estimated that there were around 50,000 feral deer living in around twenty populations in Eastern Australia.

However, deer started to be farmed for venison and many escapees found their way into the bush, swelling existing populations and creating new ones so that there are now around 200,000 feral deer in Australia living in some 218 populations. Feral deer prefer to live in grassy woodland and they have taken up residence in Australia’s eucalypt forests, rainforests and on cattle stations.

Their hooves damage the soil which leads to erosion and damages water quality in local supplies. Feral deer are herbivores and consume large quantities of grass from pastureland and they also destroy many native plants as they nibble on new shoots, leaves, fruit and bark. They also destroy many young tree saplings either by trampling them, rubbing themselves against them or eating the new shoots. Like the feral donkeys, they also spread weeds across the areas they range, and in the places where they destroy native vegetation weeds also start to take over.

They compete with Australia’s native grazers, kangaroos and wallabies, for food and also destroy pasture intended for domestic livestock. They also get into gardens and allotments causing great destruction and cause accidents on highways and roads. They are also carriers of disease that can infect both domestic livestock and native species.

Although it is generally agreed that these feral hoofed animals need to be controlled or managed in some way to stop their numbers growing and to protect the environment, the best methods to use are a matter of debate. Feral horses, deer and donkeys in Australia do not have any natural predators and the only things that threaten them in the wild are large bushfires and droughts. One of the most basic of control methods is to try and ensure that no further domestic animals escape or are deliberately released into the bush.

Feral horses are sometimes mustered and taken out of the wild to be broken or destroyed. If the land is too rough to muster them, then sometimes expert marksmen are sent in to shoot them. The feral deer can be hunted as a game animal although a licence is often necessary and there are regulations that need to be followed. There have also been experiments using contraception, but they have proved to be very expensive and did not produce good results.

Although these feral hoofed animals have been classified as pests in many cases, it must be remembered that they are living, breathing creatures that are in Australia through no fault of their own. Any methods of managing them or keeping their numbers down must be humane with the animals’ welfare being the most important consideration. If possible, non-lethal methods of reducing populations should be used, and if it is necessary to eradicate these animals to protect native wildlife and ecosystems then this needs to be done as humanely as possible.