REAL ID: The Freedom-Hating Bullies Are Back

In November the Tenth Amendment Center warned us that the Federal REAL ID Bullies have once again woken up, raised their dictatorial heads, and began threatening more states to adopt their national identification system or their citizens will be made to suffer.

For those who have forgotten, or never knew, here’s what REAL ID is all about.

The REAL ID Act of 2005 is a federal law that demands every US state, District, Territory, Commonwealth, etc. must create incredibly expensive and complicated identical driver’s licenses containing multiple technologically advanced identification features at their own taxpayer’s expense to be used as de facto national identification documents for every citizen. People without one of these dog tags will be punished by not being “permitted” to board airliners or enter federal buildings.

REAL ID, believe it or not, is a simple acronym that means “Real Identification.” As opposed to what, FAKE ID? The Office of Homeland Security has wanted to impose their really Real Identification on everyone for years, apparently so they will know that you are really real.

Unfortunately for them, the United States government has no legal power to create any kind of compulsory “identity papers” so beloved by despotic regimes of the past like Nazi Germany and the Union of Soviet Socialist Republics and by some 100 anti-freedom countries in the world today. 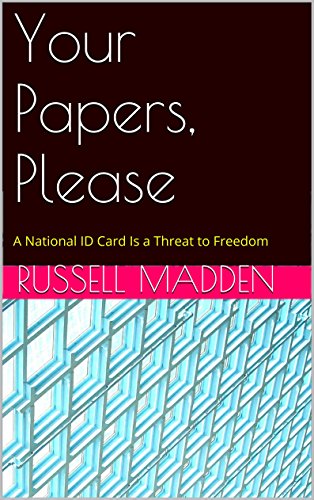 YOUR LIBERTARIAN OPINIONIZER’S PICK: (Kindle version reviewed): Fellow prolific libertarian writer Russell Madden explains in his short but crucially important essay how national ID cards give more power and control to the ruling class while stripping us all of our privacy, freedoms, rights and individuality – and ultimately our way of life.

According to a Wikipedia entry on the subject the mandatory identity cards that must be carried at all times by the people of a hundred or so countries “must be shown on demand by authorized personnel.”

With the ever-increasing number of arrogant, narcissistic, control freak militarized cops already patrolling the streets of America it’s easy to imagine how even more dictatorial they’ll become. Yet the same Wikipedia article reports "virtually no common law country has a card."

So what is a “Common Law” country? These are a few Western-style nations that have freedom-oriented rights-based legal systems like … guess who … The United States of America.

So who are these people in our US common law government that want to impose “Show me your papers” on their fellow citizens? And how can they do that with no legal power to do that? And forgetting the “official” definition above what is REAL ID really?

REAL ID, to put it simply and precisely, is an important step in expanding the police state. Police states always believe in aggressively micromanaging its citizens, often under the guise of making them “safer” by making it easier to track down and catch criminals. Or under the prevailing rationalization, catching foreign and domestic terrorists. What inevitably happens of course is that the police state simply adds a layer of statist criminals on top of the existing non-statist criminals and treating all of us like criminals in the process.

Obey Or We Shoot!

Explaining what REAL ID is simultaneously identifies who wants REAL ID; the tyrannical anti-freedom psychopathic ruling class who infests our political offices, our bureaucracies, our crony corporations and our global banking cartels.

Since the federal government can’t impose a national ID system the powercrats decided to write a law requiring all 50 states and other entities under US control to create identical driver’s licenses bearing all the usual name, address, gender, DL number stuff plus a digital HD color photo, a machine readable barcode, a hologram, a gold star compliance mark (what, no smiley emoji?) and “Physical security features designed to prevent counterfeiting or duplication” that have been oh so successful in stopping credit card fraud. (Sarcasm.)

And by the way, your driver’s license photo will be stored in a facial recognition system even if you’re not a criminal. And don’t doubt for a minute that if they can figure out how to do it they’ll demand a string of everyone’s computer-readable DNA be embedded in the card and in their system too. And next? Chip implants in every newborn? Then future ID theft will require a scalpel.

Anyone thinking that’s over the top should be aware that the US House passed a human tracking device bill on December 8, 2016. Today it’s for chipping people with Alzheimer’s and autism; as these things inevitably go tomorrow it will be mandatory for all the rest of us.

Since 2005 virtually every state in the union rebelled at the mandate. Most of the negative outcry was over the expense – although often disguised as moral principles – because state politicians would have to spend their own people’s tax money on compliance rather than on their own pet projects where money could more easily be skimmed off into their own pockets.

The feds, in the form of Homeland Security (who thinks their mandate is Police State Creator rather than Security Administrator) responded with intimidation; no one will be allowed on a commercial airliner without one of their full disclosure national identification documents.

The ludicrous thing about the whole compliance tango is that no state can possibly come into full compliance anyway. Nearly a year ago the libertarian CATO Institute wrote that “Even the ‘compliant’ states aren’t compliant.” Why is that?

The realities of this scheme/scam, the article explained, is that “REAL ID has nearly 100 requirements, ranging from very easy, standard ID-card practices to things that are currently impossible and ill-advised. States have to do all of them to be compliant.” The report then precedes a complete list of 97 impossibly tangled bureaucratic requirements and regulations with this: “The full REAL ID requirements make it easy to see why no state is in compliance today, and why no state should expend their taxpayers’ money on the onerous, complex scheme to implement the US national ID law.”

If all the states were somehow able to implement every part of REAL ID what would America look like? Here’s a parallel in the real world of how REAL ID would work.

Today a person can be placed under house arrest and required to wear an electronic ankle monitor preceding trial, meaning before the person has been tried and convicted of anything. It’s tantamount to declaring someone guilty until proven innocent. It’s like chipping your pet dog or clipping your cow’s ear. Carrying a national ID card is like being compelled to drop your drawers for any government functionary any time the functionary feels like demanding you to, whether you’ve done anything wrong or not.

If these threatened states had principled leaders who believed in individual freedom and a backbone made of actual bone and not Silly String they would call the Feds bluff. Go ahead, order the TSA to stop Americans from getting onto commercial airliners. Tell the Feds they can then deal with the screams of outrage. Deal with the political blowback. Deal with the immense pressure from the airline industry and the tourist industry and businesses that require travel when their profits become threatened and their net worth begin to tumble and the insider trading politicians see their own airline stocks taking a plunge.

And it’s all a sham anyway. According to Life Insurance Quotes “the chances of being killed in a terrorist attack are about 1 in 20 million.” And the Washington Post points out that “while the Paris attacks left some 130 people dead, roughly three times that number of French citizens died on that same day from cancer.”

So what’s the real purpose of REAL ID? Easy. Control of “the masses” by “the elites.”

But don’t worry. If REAL ID ever becomes everyone’s de facto national identification document you can bet the police state will keep us secure and safe by protecting us from our freedoms. Think how jealous those Nazis and Fascists and Commies will be, spinning in their graves. If only they’d had today’s technology…

Has Your Gutless State Caved to the Feds?