Politico-Socio issues stay ever with us. Gain perspective deciding if these words resonate with your understanding and thinking.

Around 12:30 A.M. Thursday, May 23, 2013, I was restless and needed to get out of the house for a drive. I typically am snoring about this time of day, but could not get there quick enough. I decided to go to the Circle K on Baseline and 35th Avenue in Phoenix--right down the street from where I live, to get a fountain drink.

Deep in thought as I drove on the nearly empty road, I noticed a commotion in the parking lot of the Circle K.

I did not pay much attention until I heard loud pops and saw several flashes of light right in front of me before I completely turned into the parking lot!

I saw a skinny African-American kid firing seven shots standing at the side of the store towards what appeared to me at the time to be empty space.

I stopped the car and stared at the guy about 100 feet or so away from me. He looked around quickly in my direction after firing. My first thought was that he would shoot me for seeing him, but I think the glare from my headlights did not reveal my face. He hopped in the car, which drove away with other occupants I could not see.

I panicked--afraid to move because I thought he might come after me. It was as if I saw the event in several different formats simultaneously!

I saw the flashes of light at the edge of the gun illuminating the aggressor. I saw his outstretched arm with the gun pointed almost sideways and jerking after each trigger pull. I saw the urgency in the assailant's body motion as he studied his surroundings before he decided to leave.

As soon as he sped off, I flipped a U-turn and scampered away almost in tears to my own home--shocked that something like this happened in my neighborhood! I felt so vulnerable and unsafe that I could not fathom what had just happened.

I did not call the police. I did not do anything but cut and run! As I was about to turn the corner for my home, I decided to go back and see if there was a person lying wounded in the direction of the shooting. I feared that the shooter would return.

Where it Went Down 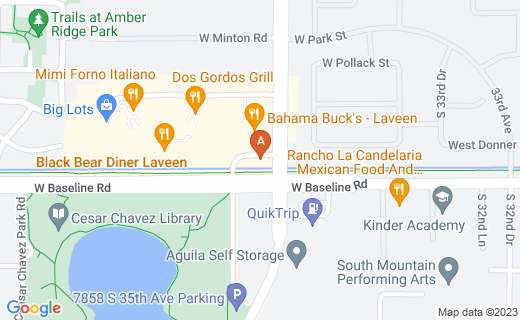 I did My own Drive-by at the Drive-Thru

I returned to the scene of the crime and drove around a bit jumping with every flash of light that glinted from any reflective surface. I drove around the rear of the Circle K to where the shots traveled and farther across the to the Filiberto's Restaurant.

I scanned the decorative rocks for a body--praying there would be none. I found nothing thankfully.

I went to the drive-thru for Filiberto's as if I were making an order I started rambling to the worker who told me to come around to the window. A Hispanic man around my age opened the window as I rambled on about what happened and asking if he was okay--as if I were the police!

He looked at me with a smirk on his face as if he were about to tell me that he did not speak English. I realized then that he thought I was the culprit myself! Why would he tell me he saw something? I could just as easily had shot him if he told me that he saw something--if I were the shooter that is.

I left the poor man alone after I realized that I should be calling 911 instead of driving in the drive-thru. I checked the area for bullet holes and checked the decorative rocks that settled every part of the lot that was not a parking space before I lost my nerve when a car entered the deserted lot. I went to the store for protection just in case. As I pulled in, I was immediately surrounded by police officers.

I Made a Statement

One man attempting to exit his subdivision was cut off by the criminals as they fled the scene.

This man out of rage followed them to their home, got the license plate and helped to capture them.

Oh yeah, he had a gun. Another man who passed me on the other side of the road in the opposite direction as the shooting occurred drove up as the officers were talking to me and gave a detailed description of the car. He had a gun too. In fact, everyone had a gun except me.

I was shaken up by the event. The officers must have noticed because they stopped questioning me for a moment. I happened to be the closest to the event of the three witnesses. I have not seen anything like it since I left South Africa 13 years ago; that's another story.

Once captured, thanks to the Road Rage Man (I call him so with the deepest appreciation and affection), we identified the shooter and his traveling companions.

I went last of the three witnesses. I stayed at the store surrounded by gun owners until I made my statement. There was one bullet hole in the door of the store.

No one was hurt. While we waited, the store clerks and I searched for the bullet in the store, which we did not find at that time. We spoke about the incident. Putting all our stories together I ended up with a complete picture.

Unfortunately, I cannot reveal it all because I may have to speak about it in court. I am grateful to God that boy did not want to shoot in my direction.

I am glad I did not have a gun and I wish I did at the same time. I think I would have shot that boy. Maybe I don't need a gun after all.