In today’s society where 1 in 2 marriages end in divorce, it doesn’t seem that marriage vows are taken as seriously as they were a generation ago. But is that really the case?

In Tammy Cohen’s Deadly Divorces, she recounts twelve couples in which one spouse believed in being together until death….at a time s/he chose, not nature.

Whether the motive was greed, jealousy, or they’d found another love, these husbands and wives decided the only way out of their marital obligations was to kill their spouse.

The short but sweet (for lack of a better word) stories of deadly matrimony from the United Kingdom will be a breath of fresh air (did I really just say that?) for American readers, however readers from the UK may find the stories a tedious repeat of media sensationalized crimes.

Additionally, those who enjoy the intensity of an investigation and trial may as well be disappointed because Deadly Divorces is big on drama, little on procedure. Personally, I loved it but I know not everyone does – so just a warning!

Deadly Divorces will make the single ponder if marriage is worth the risk and the married reader look (suspiciously) at his/her signification other in a new light, with a new question in their head: “Could s/he ever kill me?”

2. Killer Dads: The Twisted Drives that Compel Fathers to Murder Their Own Kids by Mary Papenfuss

For years we’ve been bombarded with stories of mothers who kill their young but it seems more stories are beginning to emerge of killer dads.

In the book Killer Dads: The Twisted Drives that Compel Fathers to Murder Their Own Kids by Mary Papenfuss, readers are invited to learn about recent (and one not-so-recent) cases of death-by-dad. Profiles include (but not limited to):

Killer Dads: The Twisted Drives that Compel Fathers to Murder Their Own Kids
Buy Now

Each of these stories are relatively short but provide a facts-only, in-depth look into the increasing phenomenon of killer dads.

Which ever it may be, author Mary Papenfuss brings to the forefront the horrific crimes of parents who have long been thought of as strength and protectors of their offspring.

In the last chapter, Papenfuss explores what actions society could possibly take to prevent such atrocities, including the worn out issues of more government involvement, gun control, and tougher domestic violence laws. Then the author compares the crime stats of Finland to that of the U.S. as relates to filicide and remarks on changes in Finland laws has created a decrease of these type killings. My only issue with that is the population of the United States versus Finland makes it an unfair comparison; the smaller the population, the fewer incidents a country will have. Nonetheless, it was interesting to at least learn of the prohibitive measures they’ve used.

Additionally, the two chapters on the study of male filicide in primates was very intriguing and provided a great deal of insight into human behavior (whether you believe in evolution or creationism, you have to admit our DNA proves humans are close in relation to anthropoids).

Simply said, Killer Dads is a true crime book and a educational experience rolled into one.

The introduction of the internet opened a door for a slew of crimes which our laws are struggling to match. And while we await the legal changes we hope curtails these crimes, the evening news and newspapers continue to bring us stories with disastrous endings whose roots can be traced to the world wide web.

Internationally recognized cybercrime expert Jayne A. Hitchcock compiles some of the most interesting internet-related crimes in her new book True Crime Online: Shocking Stories of Scamming, Stalking, Murder, and Mayhem, which includes:

A total of sixteen fabulous stories serve as a reminder the internet can be a fantastic tool but it can also be an incredibly dangerous place as well.

With each story spanning an average of four pages, True Crime Online is a quick read, allowing readers to dive into only the facts without the dullness of the investigations and trials.

As a fan of true crime short stories, I give this one five stars and definitely recommend adding it to your reading list.

Featuring the worldwide headline case of the missing Susan Powell and the tragic deaths of her young sons at hands of possessive, abusive husband Josh Powell, eight other interesting cases, predominately from the 1970s, are also chronicled; including – 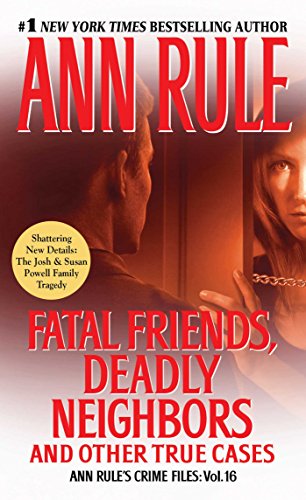 The “Queen of True Crime” does a fan-freakin’-tastic job of recounting the Powell case; neatly outlining the important evidence rather than tossing the same old minutiae as the 24 hour news channels. I truly walked away with a clearer understanding of a case I have long followed.

And the Spreckels Mansion double mystery really rocked my boat. This was a case I had never heard of (where have I been?). It’s a true mystery which will remain with me for quite some time and for which I will most definitely be adding to my “updates list.”

Then the pace slows down. Rule throws us back a few decades with old files from the latter years of the 1970s. For some, it’ll be a let down but, for me personally, I love old true crime stories and found it a nice slow-down from the page grippers in the first two stories.

5. Murder Behind The Badge: True Stories of Cops Who Kill by Stacy Dittrich

As children we’re taught to trust the officers who patrol our streets and neighborhoods. We’re told, in our greatest times of need, an officer will lend a helping hand in setting things right.

And for the most officers, this is the absolute truth. They are there to protect and serve, caring for the citizens of their communities.

But every now and again, one officer will be revealed as a wolf in sheep’s clothing; a cruel and vicious being who hid his or her hideous nature behind the badge.

Author Stacy Dittrich tackles some of the worst cases of killer cops in her 2009 book Murder Behind The Badge: True Stories of Cops Who Kill. Eighteen (18) short stories feature cases such as:

6. Women Behind Bars by Wensley Clarkson

I’ve always enjoyed Wensley Clarkson as author, but this time I have to wonder what he was thinking – or maybe I should say, which head was he thinking with?

Women Behind Bars, sold under the former title of Caged Heat, is nothing but 241 pages of women doing time, whining about their “misfortune.” For example:

Wait – I have to make a correction. Not all of the 241 pages are whines by women done wrong. Wensley appears to have no sympathy for:

Mixed amongst these stories is details suffered by women inmates doing time, from beat-downs by other inmates to sexual abuse by the guards. While the things that happen are atrocious, if Clarkson wanted me to feel sympathy, he should have used more sympathetic subjects. Quite frankly, women who kill in cold-blood are simply getting their just desserts.