Tari Pendet or Pendet Dance is a traditional dance from Bali Indonesia that was originally a dance of religious worship. Tari Pendet is used to play in a Hindu's Temple in Bali. This dance symbolizes the reception on the descent of gods into the earth. Lately, over the development period, the Bali artists change this dance to be a welcome dance although it still contains of sacred-religious symbols

The Author of Tari Pendet

Tari Pendet is created by two Balinese Dancers Maestro, Mr. I Wayan Rindi and Mrs. Ni Ketut Reneng in 1950.  Mr. Wayan Rindi is a Balinese Maestro that is known for his ability to compose and preserve the art of dance through generations.  He is teaching many Balinese Dance to including Tari Pendet to the society and the family.

In 1961 another Maestro Mr. I  Wayan Beratha processed the Tari Pendet again. Pattern of dance from I Wayan Beratha is used until now. 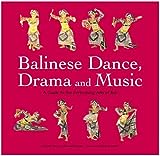 Balinese Dance, Drama and Music: A Guide to the Performing Arts of Bali
Buy Now

Unlike another performing dance that require intensive training, Tari Pendet could be danced by everybody, man and woman, children and adult people. This dance is taught simply by following the move from the leader usually is an elder or senior woman.

Tari Pendet is performed in groups or pairs. This dance is used to play after the Tari Rejang in a Pura's (Hindu Temple in Bali) yard and generally facing the direction of the sacred (Pelinggih) with ceremonial dress and each dancer brings sangku (Balinese traditional religious equipment), jars, bowls and another equipment of offerings.

Balinese people used to learn Tari Pendet since young and wherever they are in the world, they could dance the Tari Pendet.