Is there a class war on?

Books on the British 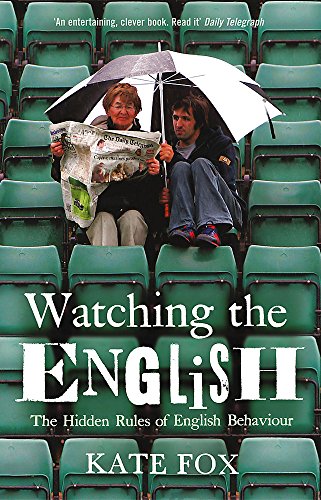 Why speech still divides the British

The class system in Britain is dead or is it, really? Following the recent changes made to the welfare system in Britain by the Conservative government [let us not talk about the LibDems], class seems to suddenly be in the news again.

People seem to suggest that class doesn't really exist and that there's no class war going on. The cuts aren't meant to hurt the working-classes but the people who are unwilling to contribute to society. Given all the hoopla - see I'm not getting involved on either side of that debate, - I thought it would be interesting to look at what class is and how one identifies it.

Researchers and writers like Kate Fox and Ferdinand Mount demonstrate how very prevalent the class system still is in the UK. Be it by dress, speech, interests and choices in home décor the different classes do still make different choices. This allows an observant traveller or social anthropology enthusiast to make a very educated guess about a person's class, and thus, their attitudes and thinking on a large number of issues. This might seem wrong, and at times it can feel like we are being pigeon-holed, but there's no getting away from the fact that we are to a large extent shaped by our parents and our communities. Class is one aspect of this demographic reality.

For this reason, this hub is going to talk about what I think is one of the most important markers of class, speech. I shall tackle other markers in later hubs.

I'm not writing this hub to make people think that I have an inferiority or even a superiority complex. I am, however, deeply interested in how, given the level of technology, mass media and information, the classes still think, speak and behave differently. The older I grow, the more class and peoples positions within it help me understand them better. It allows me to know when my behaviour is definitely being seen as pushy or obtrusive, although only because it is my class background talking. Similarly, my approach to money and life in general is a distinct result of my background and thus, class. Race and skin colour are not as divisive as class, or so I feel sometimes. It is easier for a British-Asian person like myself to mix and move with White-British people of the same class than it is for me to understand the choices of other British-Asian people from a different class. I and they speak a different language, we have different aspirations and make alternate choices in terms of how we live.

The list for this hub was taken from Kate Fox. But I must admit that once I read her work, that I did a lot of what she did - I made sure I eavesdropped on conversations while on the bus [I like in Manchester and you do hear all kinds of things on the bus], the canteen at university and coffee shops and she's spot on. I can't compete with her excellent research :)

This word is hated by the upper and upper-middle classes. Lower class suburbs are even known as 'Pardonia'. A good class-test when talking to an English person it to deliberately say something too quietly for them to hear you properly. A lower-middle or middle-middle will say 'Pardon?'; while an upper-middle will say 'Sorry?' or perhaps, 'Sorry - what?' or even 'What - sorry?'; but an upper-class or working-class person will both say 'What?'. The working-class person may drop the 't' - 'Wha?' but this is the only difference. Some upper-working-class people with middle-class aspirations might say 'Pardon', in an attempt to sound 'posh'.

The correct upper-middle/upper term is 'loo' or 'lavatory'. 'Bog' is occasionally acceptable, but only if it is said with an obviously ironic-jocular manner. The working-class, lower-middles and middle-middles all say 'toilet'. Middle-middles and lower-middles with aspirations might say 'gents', 'ladies', 'bathroom', 'powder room', 'facilities', and 'convenience.'

A 'serviette' is what the inhabitants of Pardonia call a napkin. Upper-middle and upper-class mothers will retrain their children to use the word 'napkin' if they've been taught the word 'serviette' by their lower-class nannies or child-minders.

If you use the word 'dinner' to refer to the midday meal, which the upper-classed call 'lunch,' you are definitely working-class. Calling your evening meal 'tea' is also a working-class indicator. The upper-classes call this meal 'dinner' or 'supper'. Technically a dinner is a somewhat grander meal. If you are invited to 'supper' this is likely to be an informal family meal. The upper and upper-middle classes use the term 'supper' more than the middle-middle and the lower-middles. 'Tea' for the higher classes is taken around four o'clock and consists of tea and cakes or scones, pronounced with a short 'o' and perhaps little sandwiches ala Enid Blyton. The lower-classes call this 'afternoon tea'. If you don't know and haven't still placed your friends who have invited you to dinner, ask the time. It might mean a meal in the afternoon or the evening. Similarly, an invitation to tea will require you to check. The answer will help you place your hosts on the social scale.

Another way to find out where your hosts fit on the social scale it to ask them what they call their furniture. If an upholstered seat for two or more people is called a 'settee' or a 'couch' they are no higher than middle-middle. If it is a 'sofa', they are upper-middle or upper class. If for example the item in question is part of a brand-new matching three-piece suite, which also matches the curtains, its owners are likely to call it a 'settee'.

Similarly, the room that houses the settee/sofa are also named differently. Settees live in 'lounges' or 'living rooms', sofas in 'sitting-rooms' or the more grand 'drawing room'. The 'correct' term used to be 'withdrawing room' but many upper-middles and uppers feel it is a bit silly to call a small room in an ordinary terraced house the 'drawing room' so 'sitting room' has become acceptable.

Like 'dinner' the upper-middle and upper classes insist that the sweet course at the end of the meal is called the 'pudding'. It is never the 'sweet', or 'afters', or 'dessert', all of which are lower class. Calling it a 'sweet' at the end of a meal will get your immediately classified as middle-middle or lower, 'afters' will also get you demoted. Calling it a 'dessert' will confuse many upper classes as well because traditionally a 'dessert' means a selection of fresh fruit, served right at the end of a 'dinner', after the 'pudding', and eaten with a knife and fork.

Other terms that register on the class sensitivity radar are

If you want to start talking 'posh' you will have to stop using the word 'posh' and start using the word 'smart'. In upper-middle and upper-class circles, 'posh' can only be used ironically, in a jokey tone of voice to show that you know it is a low-class word.

The opposite of 'smart' is what everyone from the middle-middle upwards calls 'common', another way of saying 'working-class'. The upper classes don't really have a problem calling people working-class, but the middle-classes find using the word class rather difficult.

A party, food and drink, helpings and first course

Lower and middle-middles talk about their 'home' or 'property', upper-middles and above say 'house'. Common people have 'patios' in their home, while the smart people have 'terraces' in their houses. Working-class people say 'indoors' when they mean 'at home'.

* I must admit that one of the things that I've personally noticed that differentiates the classes in my part of the country is profanity. How often people curse, and what curses they use really seems to indicate their background. So far, and this is purely my observation, the more Anglo-Saxon the curse, the lower the class. The middle-classes don't seem to use profanity as much, or if they do, it is a milder variety. Personally I don't know enough of the upper echelons to make a value judgement, so I shall leave them alone.

I do hope you enjoyed this brief discussion about the different words and how they reflect the class divide in Britain. Please let me know if you've noticed other major 'flashing lights' that stand out and signpost the class of people. Also do let me know if you've got similar markers to differentiate class in your own part of the world. I would be very interested in finding out more.