The Importance of Propaganda to Communist Regimes

Barb hates politics, but sometimes feels impelled to get involved on the local level. She believes we must learn from history to stay free.

How the Importance of Propaganda Saved My Husband

Can you remember back to the Cold War Years?

The Cold War Background for this Video

This video was part of an interview by the children of a homeschooling family as part of their history curriculum. This family was one we had known for many years, and they knew my husband, Kosta, had been a child in Post World War Two Yugoslavia when Tito was in power. Some had attended our Slava celebration in our home as much younger children and heard the explanation for that Serbian Orthodox holiday. On this visit they wanted to know more about that period of history from one who had lived it.

The question Kosta is answering here is about the Cold War, that period of history when the free world and the Communist countries, mostly represented by The United States and the Soviet Union, were in an arms race. Each feared the other might want to start a nuclear war, and each wanted to be able to retaliate if necessary. The hope was that the knowledge that such retaliation could take place was enough to prevent either country from starting such a war.

Here in the United States, the schools were teaching us to prepare for war. I remember many a bomb drill when we all had to crawl under our desks. Since that was about sixty years ago, I don't remember much more about it than that. Many of my generation grew up afraid of the looming threat of the mushroom cloud that could keep them from growing up.

How Personal is Political Persecution to You?

Have you, anyone in your family, or anyone you know ever been a political prisoner?

All I remember about World War Two, since I was born when it was nearly over, was talk I heard from my parents about rationing during those years. Since I was only in elementary school, I don't remember the war effecting my life in any way. I had a happy and sheltered childhood. My dad had a secure job, my parents loved me and each other, and I was blissfully unaware of the war, since it ended when I was only two. The only way it touched my life was later learning that some of our Japanese neighbors had lost their businesses and had been sent to camps far away, and as I was in elementary school, they were returning to get their lives back together again. See my review of a novel based on this period, Thin Wood Walls.

Life was much different than that for my husband and his family. My husband's childhood memories of the war include hearing the bombers coming and seeking shelter from the bombs, seeing destruction in his city, and being occupied by the German army. Tito's partisans were finally able to liberate the country from the Nazis, but they no longer had a monarchy. King Peter II was in exile in London in 1945, expecting to return to a government with power shared between royalists and the communists. Because Tito had liberated the country, though, he enjoyed enormous popular support and in November 1945, the people voted to depose the king. The country was renamed the Federal People’s Republic of Yugoslavia

The events in this video occur sometime between 1948 and 1950. Life during that period for his family was a struggle to survive. As I lived happily with my parents, went to school, and played with my friends, he experienced privation and imprisonment. The difference in our daily lives illustrate the contrast between our governments. Fortunately for my husband and his family, Tito's government wanted to put on a good face for the rest of the world, and their propaganda was very important to them. It was this that spared my husband further pain as a child.

Tito Was Hoping to Get Aid from the West, So Propaganda Was Important

Why the Propaganda Was So Important

By 1949, Stalin and Tito had parted ways because Yugoslavs did not want to be dominated by Russia, and Yugoslavia was isolated politically from its old ally. Yugoslavia's relationship with the West wasn't much better. There was a dispute over Trieste with Italy. The communist regime had nationalized property and would not compensate foreigners for it. Yugoslavia was also supporting communists in Greece. That alienated both Russia and the West.

Meanwhile, Stalin was beginning to move Russian troops close to the border between Greece and Yugoslavia and Tito was beginning to worry about a possible Russian invasion. In response, Tito stopped supplying the Greek communists and closed the border between Greece and Yugoslavia. In August of 1949, Yugoslavia no longer stood with the Soviet block in the United Nations on everything. This, in turn, got the attention of the West, which wanted to encourage the Yugoslavs to move farther from Russia. The encouragement took the form of economic aid.

This was the period when Yugoslavia did not want to offend the West by letting it get out that the regime was using the threat of torturing innocent children to pressure their parents during interrogations. Kosta's mother had gotten to know the other political prisoners. They were imprisoned for supporting Stalin rather than Tito. They had been part of the government until they turned out to be on the wrong side, but they knew how things worked politically. It was they who advised Kosta's mother to use the importance of propaganda to free Kosta and they used their contacts to help her do it.

Near Where Kosta Was Imprisoned 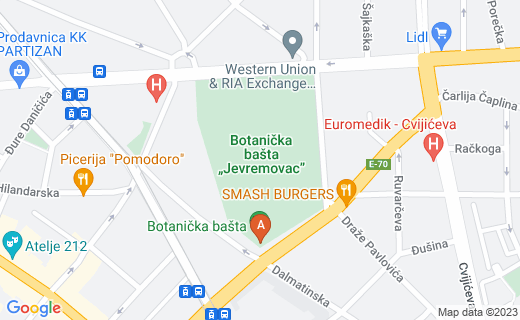 Where Did This Happen?

It's hard to pin down the name of the prison where my husband and his family were taken. He knows only it was near the center of Belgrade and within walking distance of The War Department, the Botanical Gardens and a theater for live productions. The only reference I can find to a prison in Begrade during that time was a prison in which one Andrija Hebrang died under mysterious conditions- Glavnjaca. The chronology of Hebrang's life says he died there in 1949. This prison itself was demolished in the 1950's. Between the two world wars it had been a place where political prisoners were tortured. I can't find out much more about its history after that, but that may have been the place. Kosta did not know the name. A contact I have in Belgrade now who is about our age also does not remember this place.

On the map, I have put the marker on the Botanical Gardens, which are still in the same place they were then. I know it's close.