The official, long-standing indigenous Mohawk Nation Council of Chiefs (MNCC) represents the Sovereign Nation of the Mohawk (separate from the U.S. Federal Government) that still exists in America. The nation is called Kahniakenhaka, in the Haudenosaunee Confederacy of Six Nations. All these spellings are as they wish them to be, as indicated on their official website at www.mohawknation.org/

The Haudenosaunee peoples include the Cayuga, Mohawk, Oneida, Onondaga, Seneca, and Tuscarora. They have always functioned as a democracy, for many centuries longer than Canada or the United States have been nations. 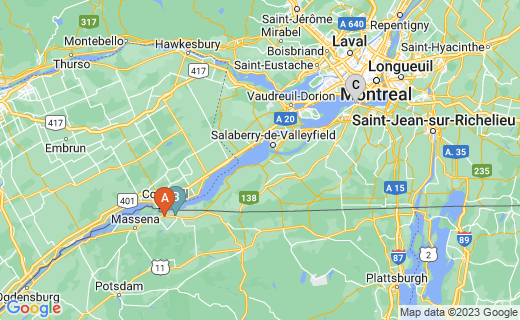 Only the St. Regis group became officially recognized in 1972 (even though it did not meet U.S. federal guidelines) and eligible for educational grants and other benefits given to recognized Native American groups. This group is a constitutional republic, as is the USA.

The federal government refuses to recognize the longer-standing, larger Kahniakenhaka government in New York State. This older group maintains that their democratic government is a gift from God and that America prefers a man-made substitute in the below-federal-standards government imposed on the St.Regis structure.

The separate headquarters of two Mohawk governments in New York State are close to the New York - Ontario international border, as shown on the map above.

The website of the larger, traditional goup is understated and professional looking. The website of the smaller St. Regis group is looser, multicolor, with a different seal, and splashy ads for casinos and bingo that shout, "The North Country's Favorite Playground" and "Where the Winning Never Stops."

The second website is a commercial web page. An IGA store on the commercial site advertises that it is tax-free to consumers, offers Senior discounts, and holds double-coupon sales. The grocery prices are comparable to those of Ohio Meijer stores at this moment. And there is a Beer Special! -- Interestingly, the larger American group of Mohawk speak against all drugs and alcohol as unwelcome mind-changers.

A third Mohawk group is located in Ontario and Quebec, Canada. Some wikis have incorrectly named it a non-partisan participatory democracy, although the non-native mainstream media and the Mohawk Nation News indicate that it is perhaps a large political group.

This entity is called The Mohawk Council of Akwesasne (MCA) and is larger than the two groups on the American side of the reserve. Its Blog and website express the traditions of the Mohawk Nation Council of Chiefs headquartered in Hogansburg/Rooseveltown.

The St. Regis website is the opposite in flavor. The MCA and the MNN News site have political impact. The MNCC and MCA together seem to uphold the most ancient traditional values, as opposed to the smaller St. Regis band of America that advertises gambling and groceries; however, both businesses provide jobs.

This all is a lot of politics for a small group of people living on 14,000 acres (22 square miles) of land.

Our communities are deliberately being made unavailable, unlivable and mismanaged to create weakness, hunger and thirst. Fierce restrictions, cutbacks, no jobs and no economy are being imposed to create hopelessness.

Resettlement is part of the strategy. Many of our people already have been removed to concentration-extermination camp conditions: Mohawk to Wahta, Innu to Labrador and Inuit to the high Arctic. Curfews and passes were imposed. Food and necessities were rationed. Many died.

Since Ohio is close to Ontario and New York, our newspapers were filled with surprising and intriguing images in the late 1990s, 1995 - 1998, from the St. Regis Reserve. A crackdown on illicit drug use was in operation and images showed unsettling physical conflicts between the St. Regis Tribal Police and Mohawk members of the New York State Police. These included male and female officers on both sides in hand-to-hand conflicts. eventually, many drug arrests were made among tribal members, while many Mohawks moved across the Canadian Border into Ontario and Quebec.

The traditional group may still outnumber the US-recognized group, but both are down to very few, making them an endangered Indigenous People. The traditional group in the 2010s is concerned about US investigations throughout the reservation in search of smuggling operations of alcohol, cigarettes, drugs, and illegal immigrants. The MNCC has stated that these issues involve all of the US-Canadian border, but that they are being singled out to take the blame. All of the Mohawks are free to travel back and forth across the international border that lies in the middle of their reservation (see the Mohawk Nation News links above).

In the late 1990s, our newspapers here told us that Mohawks were leaving the US side of the reservation and crossing over to the Ontario-Quebec side in order to escape the turmoil created by drug investigations. There is some suggestion that in the 2010s, remaining members of the traditional group may feel that authorities in New York are attempting to force the rest of them over the border as well, with persistent investigations into smuggling that may or may not be operating on the reservation.

It is the traditional group's Lacrosse players who are members of the Iroquois Nationals team that were not able to attend the World Lacrosse Championships of 2010, because of Tribal passport issues (see links above).