The Lost Revolution by Brian Hanley and Scott Millar

The author is a QUB Pol Sci Honours graduate and has written extensively on imperialism, national liberation struggles and class issues.

Brian Hanley and Scott Millars' The Lost Revolution, is, as near a definitive history of the Official Republican Movement, as there is to date. At over 650 pages, The Lost Revolution requires a fair degree of commitment, but it is well worth it. Unlike Ed Moloney's 'Secret History of the Provisional IRA', this is not a hatchet-job per se and although there will be some uncomfortable retrospective reading for old and not so old Stickies, the authors are fairly sympathetic to the Officials aims, if not their means.

The 'Lost Revolution' charts the progress of Official IRA-style Republican 'Socialism', from the 1969 split in the Irish Republican Army, which initially saw two competing IRA's: who became known as the Provisional IRA and the Official IRA. The Official IRA, overtly, the more Left-wing entity, became known colloquially as The Stickies due to their opting for adhesive-backed Easter Lily badges, to differentiate themselves from the Provisionals, who used Easter Lilies attached by pins and that moniker literally 'stuck' to them for over four decades. (The Provisionals were initially nicknamed 'pinheads', due to their Easter Lily badges being kept in place by traditional pins, but unlike their separated comrades in the Officials, that nickname didn't catch on).

The Officials/Workers Party certainly had no shortage of innovative ideas, for instance, their efforts at a cadre education camp at their Mornington center and attempts to build strong fraternal links with the former Socialist countries. No-one can doubt that the Official IRA's overt commitment to their 'project', and The Lost Revolution by Brian Hanley and Scott Millar, goes some way to at least confirm this adherence to those principles.

For the dedicated Sticky cadre, as the years winded on, their ends always justified their means and no departure from traditional tenets, of Irish Republicanism, or indeed their notional Republican Socialism, was too much of an ideological stretch for them in their pursuit of political power, approval from the northern statelet's apparatus and perceived constitutional political respectability. There are invaluable lessons for contemporary Irish Republicans, from the Officials' political journey: from literal boom to bust. At the height of their political influence, especially in the Southern 26 counties, they had seven TDS (Members of Irish 'parliament') in Leinster House and came within a whisker of eclipsing the Free State Labour Party.

Unfortunately, for the Workers Party, the various contradictions within their movement contained the seeds of their own destruction, as their mixed bag of Social Democrats, Socialists, professional politicians, professional thieves, not-so-secret paramilitaries and anti-paramilitaries, eventually clashed dialectically. The rest, as they invariably say, is history - with the majority of the Southern and parliamentary party morphing into the social democrat, Democratic Left, and finally merging with the southern Labour Party. The rump of The Workers' Party, which was then left with two TDs, the more Socialistic politicos, the Northern element and the Official IRA members, eventually split again, with the apparently more Republican element forming the Official Republican Movement (ORM). The more or less moribund Socialist Network has its' origins in that split.

Today, The Workers' Party and Official Republicanism is a mere shadow of its former self. The party has a couple of councilors in the south of the country and as more '69ers' go up the road to Milltown, in National Flag draped coffins, their presence in Belfast is maintained by a drinking club. According to a former member, the Workers Party Club, on the Grosvenor Road, is where those who manage to turn up for their annual Easter parade can claim a free pint at the bar.

"It took twenty five years to build into a great and effective party and it has been smashed from within in a week!"

As a postscript, there are indeed serious lessons for contemporary Irish Republicans, to be learned from the machinations of the Officials, their tactical dumping of core values and their journey to near governmental political power. Provisional Sinn Fein's current dash towards political respectability could look, to many observers, to be heading in the same political trajectory of their old adversaries and perhaps repeating the same mistakes. Time will tell.

The Official Republican Movement (ORM), today contains IRA veterans, from the times of Operation Harvest (12 December 1956 – 26 February 1962), also referred to as the Border Campaign. There is often little love between the ORM and some members of the Workers Party (referred disparagingly by some as The Workers Party PLC). Sean Garland, a veteran of the Brookborough Raid, during Operation Harvest, and arguably the Official's most dynamic figure died in December 2018. At one time he'd been questioned, and heavily suspected, right up until his death, as being a conduit for the DPRK's so-called forged Super Dollars.

The Lost Revolution by Brian Hanley and Scott Millar, and their story of the rise and fall of the Official IRA and the Workers' Party is invaluable reading for anyone with an interest in Irish Republican politics. It will no doubt be political commentators and the fourth estate's primary reference, in years to come, when examining the activities of the Stickies and their various incarnations. 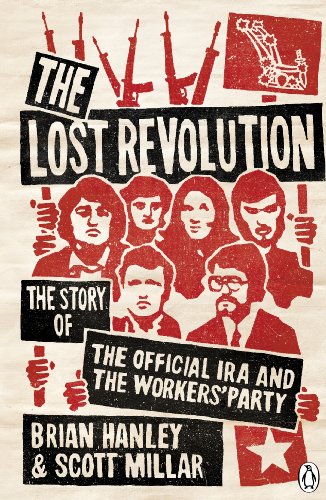 The Lost Revolution: The Story of the Official IRA and the Workers' Party
Buy Now