If you're looking for specific information on the Tibet-China conflict, here are links to Part 2: Why China wants Tibet; Part 3: Current Policies and the Dalai Lama; and Part 4: Controversy and Protests over Violence, Past and Present.

Thousands of orange-robed monks sit resolutely on the hillsides, covering the barren plateau like a field of poppies. Crazed rioters, infected by a violent mob mentality, shatter shop windows with sticks and bare fists. A young Buddhist nun, having finished her final prayers, drops lit matches onto her gasoline-soaked robes and is rapidly consumed by a fiery blaze, her last cries for freedom almost drowned out by horrified screaming and the barked orders of police.

Am I being melodramatic? I saw these scenes on NHK.

These are not scenes from long ago. In fact, they are images from Tibet over the past 50 years to right now; maybe last year, maybe last week, maybe today.

This is part one of a series in which I plan to briefly cover the Tibet-China conflict, a conflict that roughly began in the 1950s and continues today. I'll begin in this section with an overview and covering the history of the conflict. It's controversial due to the strong interests and stakes of all parties involved, and information is often disputed, conclusions drawn even more so. The question "Is Tibet part of China?" can provoke a fierce debate.

I ask all readers, no matter how passionate on either side, to please keep an open mind and be open to further research and discussion. Comments are welcome and I will not censor, so please comment responsibly.

This isn't intended to be purely factual, and it includes the opinions and conclusions I've drawn from my research. Comments on both my conclusions and my facts are welcome; the more that comes to light the better. I will post my sources at the end of the series to try to avoid HubPages' duplicate bot. I very much encourage anyone interested to do their own research and wade through the propaganda and fluff to find legitimate information and begin conversation about Tibet again. Thanks for reading.

Overview of the Tibet-China Conflict

Tibet is a region situated in the Himalayan plateaus west of China. Located in Central Asia, its military position and rich resources have made it a prize for centuries. Once a proudly independent country with a unique culture of wandering nomads and Buddhist monks, sixty years of often violent oppression by the People’s Republic of China (PRC) has scattered its people across the globe and rendered its native ethnic base close to collapse, though this is disputed by China. The controversy of "Is Tibet in China?" has gone global and now holds international weight.

Reports of human rights violations, though denied by the Chinese media either outright or by omission, have surfaced in numbers too large to be brushed aside, and protests both peaceful and violent have gained Western media attention. Through unjustifiable brutality and deflections of responsibility, China has badly mismanaged Tibet, and the consequences are now becoming clear. Though the media attention has waxed and waned, making the reports sometimes seem arbitrary, this conflict did not begin suddenly. The PRC's invasion of Tibet took place in 1950, but it's difficult to understand the current situation without a deeper historical background.

Interactive Map: Where is Tibet? 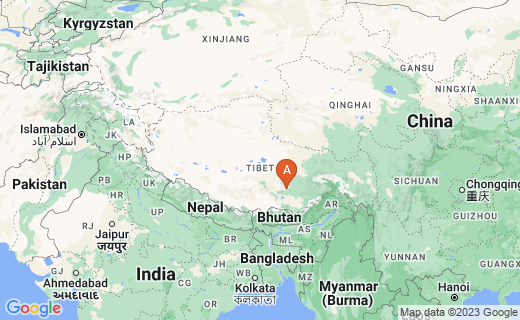 This is Tibet. Scroll around to see where it is in relation to the rest of the region.

Power struggles around Tibet can be traced back 14 centuries, but today’s wave of conflict can be said to have begun with the events that led to the 1914 Simla Convention and China’s actions there.

In the 20th century, Russia, China and Great Britain were all attempting to establish control in the Himalayas, leading Tibet to repeatedly reassert its independence. Undeterred, a number of officials in Britain and China continued to press for a forceful takeover, but when the strategizing began to look like it could turn to violence, leaders in all three countries decided that an official agreement must be made.

In 1914, representatives from Britain, China and Tibet met in Simla, India to negotiate a treaty over Tibet’s status. In broad terms, the treaty names “Outer Tibet” (roughly the same area as today’s Tibet Autonomous Region) as an independent region under Tibet. Part of Tibet’s eastern region, named “Inner Tibet”, would go to China.

It was widely assumed that the three countries would come to an agreement; however, instead of negotiating further, China flatly rejected the document, and Ivan Chen, her representative, withdrew. The delegates from Tibet and Great Britain decided that would count as China’s refusal to sign, and the two countries proceeded to finalize the agreement without granting China any rights under the treaty.

Today, China’s actions at the convention add another layer of dispute in the controversy surrounding the conflict. China, now officially the People’s Republic of China (PRC) asserts the entire treaty is unrecognizable by law, as Tibet was never independent. The claim is that, as only a region under China, Tibet had no right to sign any treaties without China’s consent, and therefore, both Inner and Outer Tibet “remain” Chinese.

Tibet’s position is completely different, as it is based on the view that Tibet was independent before the 1914 Simla convention. The Tibetan parliament has ruled that China’s lack of agreement at the convention means that the Dalai Lama, until recently Tibet’s religious and political leader, still has legal control over both Inner and Outer Tibet.

The lack of consensus around the Simla Convention led directly to the domestic and international controversy surrounding China’s invasion of Tibet in 1950. Official and unofficial pressure on Tibet to incorporate increased almost immediately after the Communist PRC was founded by Mao Zedong in 1949. Weak attempts at negotiations went in circles over the next year, during which China began to build up the People’s Liberation Army (PLA).

In 1950, the pressure after a fiery series of failed negotiations became too much for the already seriously strained PRC-Tibet relationship. The PLA invaded Qamdo in October of 1950 with the goal to either capture or kill the Tibetan Army that was situated nearby. The battle was a massacre. The 8,500 Tibetan volunteers were utterly destroyed by the well-trained, well-equipped 40,000 soldiers in the PLA. The optimistic calculations of the PRC estimate 140 killed or wounded on the Chinese side, and 180 killed on the Tibetan side. Tibet claims 5,000 Tibetans were killed in the battle, more than half of their entire army.

Though statistics like the casualties must necessarily be secondhand, the fact that the invasion preceded a devastating aftermath for the Tibetans cannot be hidden even by the formidable talents of the PRC. Without even the limited firepower of their few thousand volunteer soldiers, Tibetan negotiators inevitably lost more and more ground. Eventually, Tibet was incorporated into the PRC by the Seventeen Point Agreement, a document that gave China sovereignty with Tibet as an autonomous region. (Link: Wikipedia article on Seventeen Point Agreement)

Tibet and many international governments, officially or unofficially, view this document as unwillingly signed under duress. Tibet’s fourteenth Dalai Lama has repeatedly issued official statements that he and the Tibetan government regard the Seventeen Point Agreement as invalid.

China’s official position, however, is succinctly summarized by an editorial on the China Daily website. “The Agreement of the Central People’s Government and the Local Government of Tibet on Measures for the Peaceful Liberation of Tibet (otherwise called the Seventeen Point Agreement) was the treaty that peacefully returned Tibet to the motherland, to the great welcome of both the People’s Republic and the people of the Tibet Autonomous Region” (http://www.chinadaily.com.cn/china/tibet2011/2011-05/23/content_12559789.htm).

How does China justify the invasion and its claim to Tibet? China’s argument is mostly historical. China claims that Tibet has been an integral part of China since the Yuan dynasty ended in the late 14th century, and therefore she retains the right to deal with Tibet as a rebellious region, like any other country would if a state suddenly wanted to become its own country.

Tibet, however, disagrees. The Tibet-government-in-exile’s official position is that Tibet has been an independent nation since Namri Songzen united the region in the 7th century, though it was periodically controlled by Mongolia.

On the Free Tibet website, the Historical Relationship page states, “One of the most incredible Chinese arguments is that the Ming Dynasty somehow inherited a territorial claim to Tibet from the Mongols. There is no evidence whatsoever to suggest that Tibet was subordinate to China… suggestions that Tibet became an integral part of a "Chinese" empire during this period are wholly indefensible” (http://www.freetibet.org/about/historical-relations).

Following this line of reasoning, Tibet maintains that China’s invasion in 1951 was against international law, its signing of the 1914 Simla Accord was legal, and that it remains an independent nation.

Is Tibet part of China?

There is no easy way to prove these historical claims, on either side. All scholars and researchers are accused of bias, most of the time justifiably. Primary sources are disputed, and often times historical evidence is destroyed by the more militant advocates on both sides. That, combined with the PRC's formidable propaganda skill, makes it very difficult to find and, more importantly, prove the truth.

I, at least personally, feel that historical truth will not come to light until this conflict has passed, and researches can analyze with the influence and pressure of a controversial, high stakes conflict.

Comments are welcome and, as stated in the beginning, I will not censor, so please comment responsibly. Sources in the form of relevant links (no spam please) are very much welcome in posts.