Thou Shall Not Kill: The Immorality of the Death Penalty

Ms. Giordano is a writer and public speaker who is interested in politics and history.

What part of “Thou shall not kill” do we not understand?

Capital punishment is an immoral, unfair, unjust, and barbaric practice that demeans the United States. Killing is killing whether done by an individual or by the state. Killing is immoral. The death penalty is immoral.

Is the death penalty immoral?

There is so much unavoidable death in this world--natural disasters, illness, accidents, and old age. Why then do we add to that toll with war, murder, and state-sanctioned executions?

War and murder are complicated intractable problems. But capital punishment can be abolished with the stroke of the pen.

Is the death penalty fair and just?

The death penalty has no benefit over long-term imprisonment. It does not deter murder, and it is much more costly than life imprisonment. The death penalty is unjust, unfair, and capricious—there are no clear guidelines as to which murder cases warrant the death penalty. It is racist because it is disproportionately used against African-Americans. Further, for a variety of reasons, an innocent person is sometimes executed.

The death penalty is so capricious that it is more like a lethal lottery than justice. In the short story by Shirley Jackson, The Lottery, each year one person from the village is chosen by lottery, and then the rest of the villagers stone the lottery “winner” to death. This is done to insure a good harvest. Is this what the death penalty is about? Are the ones we execute our scapegoats, being killed as a symbol, so we can reassure ourselves that life is fair and just?

Why do so many Americans support the death penalty?

The reason for support of the death penalty can be summed up in one word—revenge. The urge for revenge is strong within us. If someone hurts us, our instinct is to strike back.

I sometimes think about what I would do if someone close to me was murdered. I I’d just want to grab a baseball bat and club the murderer to death.

But as civilized moral human beings, we learn to control our animal instincts and emotional impulses. We learn to let go of our desire for revenge. We replace our revenge instincts with empathy.

Empathy means you identify with another person, and thus you literally feel their pain. Saddam Hussein was a terrible person, yet when he was hanged, I felt pity for him.

I also think the death penalty has wide spread support because most Americans think about it only in the abstract. We do not have public hangings so we do not have to come face to face with the reality of the state murdering a human being. Since we don’t see it, our empathy is not engaged.

Many of the people who actually carry out the death penalty, even hard-boiled prison wardens, report that they feel “haunted” by it.

It is immoral to kill another human being whether I do it myself or let the state do it for me. I think most of us intuitively feel this way and that is why we will often refer to a murderer as an “animal.” If someone is an animal, and not a human being, then it is easier to kill him.

Is the death penalty humane?

We cannot convict a person of murder unless we can ascertain that they are capable of knowing right from wrong and that they understand the consequences of their actions. Thus, the mentally ill, the retarded, and children are usually exempt from the death penalty.

Maybe it is a birth defect--some faulty “wiring” in the brain. Or maybe childhood abuse and neglect is responsible for the murderer’s failure to develop emotionally.

We don’t kill people with birth defects or the mentally ill. We try to cure them, and if they pose a danger to themselves or others, we may place them in an institution to care for them in a humane way while safeguarding society.

Does the death penalty deter murder?

Why do we think we can deter people from killing people by killing people? That is like trying to teach our children not to hit … by hitting them. If you have raised a child, you know that “Do as I say, not as I do” is not a very effective way to teach morality.

In a subtle way, the death penalty sends a message that killing is OK, just as hitting children teaches them that hitting is OK---as long as the other person “deserved it.”

Does the convicted murderer at the time of his or her conviction “deserve it?” By the time the execution is carried out, the convicted murderer is usually not the same person who committed the crime many years earlier. If a person has changed, whether through religion, education, or psychiatric therapy, does he still “deserve” to be executed?

Does the death penalty give closure to the families of the victim?

Sometimes it is said that we have to have capital punishment in order to give closure to the family of the person who was murdered. I interviewed Dr. Herschel Hughes, a psychiatrist in Orlando Florida who specializes in treating the families of murder victims. He said “Capital punishment prolongs the suffering of the families.”

Dr.Hughes explained that first there is the trial, and then the numerous appeals, and finally the execution. Just as the family members begin to heal from the trauma of the death of their loved one, the scab is ripped off again and again.

Dr.Hughes told me that often a family member’s anger is focused on the execution and after the execution there is not closure, but emptiness. The execution is over, but their anger and grief is still there. It would be so much better for the families of the victim if it could end with the trial.

Further, Dr. Hughes pointed out that the murderer and the victim sometimes are members of the same family. Think how terrible it must be—your son was murdered and now the state is murdering your brother.

Capital punishment also hurts the family in another way. The family has suffered the grief of losing their loved one; and often they do not want another family, the family of the murderer, to have to suffer that grief also. Often they forgive the murderer; forgiveness is what brings healing. If they can forgive, why can’t we?

What do religious leaders have to say about the death penalty?

The Catholic Church opposes the death penalty. Other major religions do not have a pope to speak for the entire religion, but many of the major leaders of Protestants, Jews and even Muslims (if they are not part of the faction that believes in Sharia law) oppose it.

In the Old Testament it says, “An eye for an eye.” This meant that the punishment should not be greater that the crime (Exodus 21:24). However, the Old Testament also deemed death an appropriate punishment for a lot of things, including not keeping the Sabbath holy (Exodus 31:14). In the United States, laws are not based on the Bible.

In Christian belief, the New Testament superseded the Old Testament—a stern God was replaced by a loving God. Jesus was a victim of capital punishment. When he was on the cross, he did not ask for vengeance or justice He asked for forgiveness. (Luke 23:34).

Perhaps vengeance has no place in a modern society. Perhaps justice is not the pre-eminent value.

Once again, what part of “Thou shall not kill” do we not understand?

Please take part in this poll. Yu may use the comments section to explain your vote.

What is your opinion of the death penalty in the United States?

Comedian John Oliver makes the case against the death penalty. 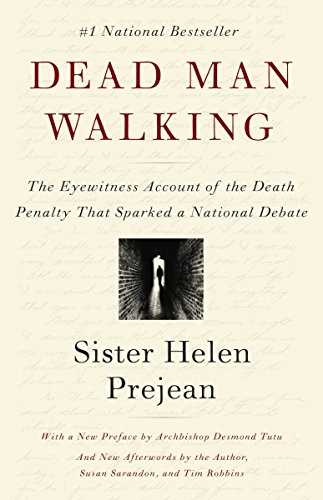 Dead Man Walking: The Eyewitness Account Of The Death Penalty That Sparked a National Debate

This book, written by a nun, took me on a journey through the human consequences of capital punishment --the plight of the condemned, the rage of the bereaved, the effect on society.

You can also find many other books on this subject. Just click the button below.