On February 3, 21-year-old Joey Knapayswee, of the Fort Albany First Nation, was shot and killed by a member of the Timmins Police Service after an "interaction" at Gillies Lake, as reported by the Timmins Press.

The next day, Agnes Sutherland, also from Fort Albany, died while in Timmins Police custody after being arrested at a city shelter, as reported by the CBC.

"It is alleged that when police attended at the scene of the local shelter Ms. Sutherland was treated roughly while being taken into police custody," a statement issued by three James Bay chiefs was quoted. "She suffered severe complications during her detention and ultimately was taken to hospital where she died Sunday evening."

Mr. Knapaysweet was reported to have traveled to Timmins to seek medical treatment, as reported by the CBC. He was shot near the Cochrane District Emergency Medical Services main Timmins station.

"What did he do that was so bad that he had to be shot and killed?" questioned Mr. Knapaysweet's mother, Micheline. "I am so heartbroken, with so many questions unanswered. I cannot sleep at nights, I need answers. This is my son, my child."

The circumstances that led to the shooting of the First Nations man who dreamed of the "betterment of his life" remain unclear and are being investigated by the Special Investigations Unit, as reported by the Timmins Press.

New Marijuana Regulations 'Up In The Air'

While the federal Liberal government originally planned to have recreational marijuana available for sale by July 1, 2018, Health Minister Ginette Petitpas Taylor "has conceded that provinces might need eight to 12 weeks beyond that date," as reported by the CBC.

Thunder Bay drug strategy working group coordinator Cynthia Olsen says that several issues need to be resolved before the implementation of legal pot, including whether marijuana use will be permitted in hotel rooms and whether there should be a "zero tolerance for cannabis consumption" on the part of "novice drivers."

Currently, the new regulations are calling for pot use to be limited to private residences, but it isn't clear whether this includes patios and backyards.

"We'd want you to do that outside for health reasons," Ms. Olsen stated.

Further, the Thunder Bay Bay Police Service is still waiting for guidance from the Ontario government with regard to which marijuana intoxication device to use for roadside screening. The location of the single proposed Thunder Bay "pot shop" is also said to be still under consideration.

Southern Ontario Man Fined For Shooting At Moose On Road

Lorenzo Angelucci, of Woodbridge was fined $4,000 and suspended from hunting for one year after he "pleaded guilty to discharging a firearm without due care and attention or without reasonable consideration for people or property," as reported by Net News Ledger.

In October 2016, Mr. Angelucci was witnessed shooting at a bull moose, while both he and the animal were standing on Boundary Road, located east of Dryden. He will be required to pass the Ontario Hunter Education Course before being allowed to receive another license. 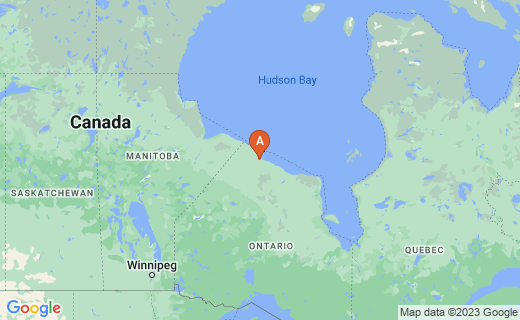 The Fort Severn First Nation, located on the Hudson Bay coast, like many remote communities, does not have the resources to provide complete high school educations to community students. Each year, many families are faced with their children moving south to cities like Thunder Bay to complete their schooling.

Thunder Bay Police Services members recently traveled to Fort Severn to meet with First Nation youth and advise them on how to "stay safe while learning away from home," as reported by TB New Watch. The police officers' presentation is said to have included advice on "basic street safety" and "keeping in regular contact with family."

"It's very important to make these kinds of connections," Campagna said. "By making these connections now we may be able to help alleviate some concerns and prevent issues from arising in the future."

Temperature of -13 degrees, windchill -20, falling to -23, overnight, with a 10 to 30 percent chance of precipitation, as reported by The Weather Network.

Temperature of -0 degrees, windchill -4, falling to -20, overnight, with a 30 to 80 percent chance of precipitation, as reported by The Weather Network.

Temperature of 4 degrees, windchill 1, falling to -14, overnight, with a 30 to 40 percent chance of precipitation, as reported by The Weather Network.