Voting Makes a Difference in California

Voting Helps in Richest, Poorest and Angriest US Cities

I've been reporting on local attractions and the numbers and types of jobs available in cities and towns named by Forbes, BusinessWeek, and other publications as America's richest, based on individual and household incomes. Some of these places are pretty interesting.

Many of these towns are in Southern California in or adjacent to Los Angeles County. At the same time, one of the poorest towns is located in the middle of the rich. There, one out of every six residents earns below the federal poverty line. That's roughly 17% of the population of Bell, California.

The poorest, angriest residents of Bell took action against their poverty by voting to replace corrupt officials. Since then, their lives have improved and so has the city.

The little city of Bell, Calif., became a symbol of greed and failed government when it was found that city officials had awarded themselves huge salaries.

The Year of Major Corruption

In the autumn of 2010, a scandal came under fire as three of the Bell city leaders awarded themselves huge bonuses in spite of the high poverty level in their town.

On Tuesday March 8, 2011 - Mardis Gras Day as well - the voters of Bell had their chance to change leadership, as reported in the New York Times on March 9, 2011:

"Residents of the scandal-riddled City of Bell, Calif., have ousted their entire city government."

According to this article, a landslide vote replaced all of City Council, including the only person not implicated in the scandals of 2010. Voting seems to work in this community.

However, the new council was forced to dedicate itself to budget cuts and other actions to maintain city solvency. 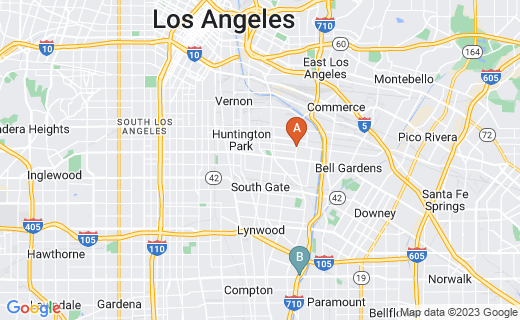 How does a council member from a working class community, where the median income was $30,000 a year, afford to drive around in a $100,000 Mercedes Benz?

Across the nation in Columbus, Ohio a similar scandal brewed and was not discovered until June 2015.

Red Light Cameras for issuing moving violation tickets were outlawed in 2015 by the Ohio Supreme Court. The cameras presented several problems, including a lack of accuracy. At the same time, a local elected official, Andy Ginther, announced he would run for Mayor.

Next, news surfaced that the company that had been behind the Red Light Cameras had allegedly bribed Ginther to help keep them active for many years. Ginther disappeared from the media temporarily, but he eventually became mayor.

What about the Bell City Council?

The city handled its problems and was not forced to dis-incorporate and revert to county land.

In the City of Bell, BASTA (Bell Association to Stop the Abuse) was proud as the Grand Jury found a guilty verdict for the Bell Six, who were corrupt local elected officials.

Voting Does Make a Difference

In reporting the local government scandals, the Los Angeles Times put a story on their front page about Bell.

This seemed inordinate for a town of 36,000 people with about 4,800 people subsisting in poverty - over 13% of the people were poor.

Audits found graft among the Mayor and Vice Mayor as well, with another violation on top of all that - overtaxing people and businesses by about $5.6 Million. At the time, officials had the opportunity to go to prison or to get away scot free with large pensions. A Grand Jury indictment ended the latter possibility.

Meanwhile, the Bell city clerk's news website reported that $3,000,000 of the wrongful taxation money was already refunded in 2011. In the US Census2010, the population had grown to 37,800. about 6,400 in poverty, or 17% of the populace in poverty. Poverty had worsened, in part because of the white collar crime of the City Council.

The Grand Jury helped those children believe in integrity. Higher voter turnout and the replacement of city government is a good start to living up to that ideal as well. The people of Bell voted out the entire City Council and replaced all of its members, with no further corruption evident date.

In Columbus, Ohio Andy Ginther will probably not run for Mayor after all. If he ran for the nomination, voters would probably deny him the privelege. Despite many improvements under the administration of Mayor Michael C. Coleman, many children still live in poverty. Secret bribes to city officials unbeknownst to the Mayor did not help those children.

The city is dedicated to sustainability as well and has a whole menu of requirements for transparency in government. Bell is a different city today because of its citizens' votes.

AS of the end of March 2019, the Bell area enjoyed a listing of approximately 97,000 job openings. The ratio of unemployed individuals to the number of open jobs is 1:1, or one job opening for every person who needs one.

Aggregated job listings from all Internet sources show over 135,000 job listings within 25 miles of Bell. In a poverty stricken population, transportation can be problematic; but local and connecting passenger transportation has improved among the ricer communities since 2011. Within 5 miles of the center of the City of Bell are an average of 6,000 to 10,000 jobs advertised on any day.

Amid the poverty, two-thirds of the homes are rented and the median home price is over $291,000, in a range similar to the wealthier places in this area of Southern California and Los Angeles County.

The Los Angeles River draws many visitors, flowing roughly alongside many portions of Interstate 710 to the Pacific Ocean.

After flooding incidents threatened communities along this river around Bell and Bell Gardens, the US Army Corps of Engineers built concrete walls to contain it during The Great Depression.

New initiatives supported by voters developed to preserve the local riverfront from Los Angeles to the ocean and the river communities are becoming more tourist friendly. At one point, portions of the river were little more than a concrete gutter drain-off; but today, local families and visitors enjoy the river along its full banks.

Bell's East Gage Avenue, from the center of the city at the Bell Palm Plaza mini mall reaches the river to the east beside I-710 in just under a mile, passing by the Veteran's Memorial Park. Maywood Riverfront Park is a mile to the north. Cudahy City Park on the river is about a mile-and-a-half to the south. 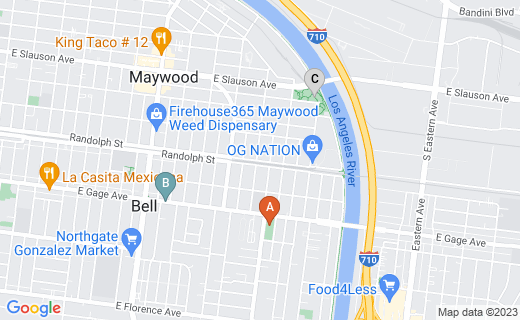