What Libertarians Must Do: Live Peacefully in Disagreement

Lockstep groupthink collectivist political and nonpolitical approaches to organizing society are nonstarters for libertarians. That’s why, then, when Author & Journalist Luke Henderson gets it so right in so many ways in his ten-part article series “10 Things Libertarians Must Do” on the Think Libertarian website—and should be read in its entirety—it just begs to be nitpicked by other libertarians, respectfully, as is done below.

It’s that constant picking, poking, prodding, pushing and provoking that sharpens the minds of those who wish to be free from coercive control.

Some people “Agree to disagree” but libertarians “Disagree to agree.”

Below are ten agreeably agreeable disagreements with Henderson's ten-part publication. 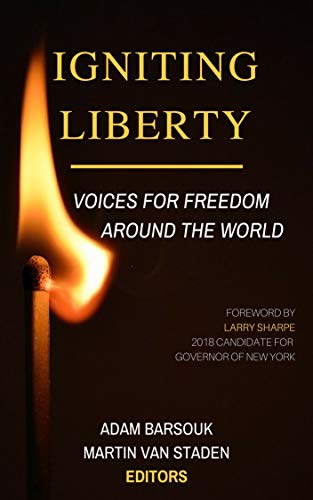 Igniting Liberty: Voices for Freedom Around the World

Luke Henderson is one of seven advocates of liberty who contributed original articles to this book. They all offer their own unique perspectives on the issues that matter most to them. The result is an excellent introduction to libertarianism for young people.

In Henderson’s own words, “I did an essay in intellectual property in the music industry, one on the effects of prohibition and other government regulations on the American diet, one on technology and education, and one on creating a set of non-political ethics for libertarians."

Henderson offers “the rise in prominence of the Libertarian Socialist Caucus of the Libertarian Party” as a broadening of the libertarian idea since the LP can “now claim to be the one truly uniting party containing socialists, capitalists and everything in between.” But he fails to say how that would work. Here’s how:

Step outside the politics of a “libertarian society” and advocate a truly “free society” where all who sincerely reject coercion are welcome. If socialists believe that rent is theft, as Henderson correctly points out, then socialists have every right to be neither renters nor landlords, but they have no more “right” to impose that belief on others any more than capitalists have any “right” to force them to be renters or landlords. Freedom is what people do, not what they think. (It’s called Voluntary Socialism and it’s a real thing.)

This part begins by saying that libertarians “can have an arrogant air about them and unjustified sense that they are more intelligent.”

Henderson is right but if he spends a little time on social media he’ll see that everybody thinks that way. Democrats, Republicans, socialists, white supremacists, race baiters, hardcore right-wingers and Socialist Alt-Left SJWcrats and everyone else who can access the internet and tap a keyboard.

Stop wallowing in snobbery is good advice for everyone.

What Henderson seems to be saying here is that the basic libertarian message—“Don’t hurt people and don’t steal their stuff”—is a very attractive, exciting, arousing, sexy idea that all decent people should embrace but don’t because it’s just being pushed by people too nerdy geeky unsocial to communicate it properly.

Not much to argue with there. The Modern American Libertarian Movement needs sexier nerds.

Part 4: The NAP Is Flawed

Nap is not “flawed” because:

Prin ci ple /prinsəpəl/noun fundamental truth or proposition that serves as the foundation for a system of belief or behaviour or for a chain of reasoning.—Oxford Dictionary

The NAP isn’t flawed any more than an ENTRANCE sign on a building is flawed. Standing outside the door and pontificating about what might be inside the building is the actual flaw. Don’t blame the principle; blame your own lack of understanding about it.

Many smart people have preceded us. Henderson offers a good overview of the best known freedom advocates and doesn’t shrink from pointing out both their wisdom and warts, raising him above any charge of chauvinistic cheerleading. Individualists come to libertarianism from many beginnings; Randians, Rothbardians, Hoppeans and others are open to criticism but a freethinking individualist will embrace the best they have to offer, reject the rest, and weave their own non-aggressive libertarian worldview.

A nutshell description of libertarianism is “Individual Freedom and Personal Responsibility.”

But Henderson writes, “Simply put, libertarians need to drop the personal responsibility angle from our rhetoric, or at the very least, better explain what one means by it.”

For chrissake, don’t drop it, explain it! Which Henderson himself proceeds to do quite well. Otherwise why not drop everything else without explaining it? Drop the importance libertarians find in freedom, liberty, individualism, voluntaryism, self-ownership, the non-aggression principle and all of it!

Acceptance of the libertarian non-aggression principle against coercion, intimidation and fraud is in and of itself the acceptance of personal responsibility.

So some people fear or don’t want or don’t believe in personal responsibility? Without explaining it in a libertarian context along with everything else they’ll never ever comprehend that the non-aggression principle is simultaneously a responsibility to oneself and to others: It means being responsible for yourself while doing no harm to others.

What Henderson is talking about here isn’t coerced political collectivism which every libertarian must reject else they’re simply not libertarian; he’s talking about social collectivism. In other words, libertarians should never excuse bigoted groupthink mistreatment and harassment of some people by other people even as they embrace such concepts as freedom of speech, press, religion, association and all other related concepts that fall under the non-aggression principle against coercion, intimidation and fraud.

NAP is not the exclusive property of the Libertarian Party; it belongs to everyone who has a heart, a soul, a conscience, a sense of humanity and a commitment to simple common decency.

In short, note the presence of the word “intimidation” in the non-aggression principle against coercion, intimidation and fraud. Everyone should reject groupthink identity politics and groupthink social politics along with groupthink political collectivism.

While Austrian Economists are “placed on a very high pedestal” in libertarian circles Henderson complains this causes too many libertarians to conclude that “any problem in society is because of government regulation.” He then points out that “There are a plethora of economists who explain why free markets are preferable to government interference without aligning with the Austrian dogma.”

That’s good to know but here’s something even better to know: Many people just can’t stomach economics period. Instead they were drawn to libertarianism via politics, philosophy, novels, think tanks, Reason magazine, the Atlas Shrugged movie series and personalities like Ron Paul and Fox News commentators John Stossel and Judge Andrew Napolitano and others, by comic and magician Penn Jillette and by the many online pundits, writers, bloggers, essayists, maybe by a Voluntaryist comic book and possibly even by one little-known Opinionizer.

There are two other choices mentioned here also: Either read anti-Austrian economics so as to “know your enemy” or find people who can simplify and effectively communicate economics. Good luck with both.

Part 9: Start Playing Outside the Duopoly

The “duopoly” is, of course, the Democratic-Republican political machine. Henderson thinks “it’s time to consider other methods of getting candidates elected” and he offers examples of what can only be called attention-getting gimmicks that some candidates have used and then redirected the gimmick positions to serious libertarian positions.

These included a campaign to “Arm the Homeless;” the platform for a candidate for Sheriff included “free all the prisoners, arrest all the cops and burn down the jail;” and of course there’s always satirist and perennial LP candidate Vermin Supreme who campaigns with a large boot on his head and a giant toothbrush in his hand.

But that still doesn’t win any elections for one simple reason: The time has not come for Libertarian politics.

To paraphrase Objectivists, “Politics is merely the practical application of philosophy.” The philosophy of libertarianism must be firmly understood, embraced and established in a society before any political success can have any possibility of succeeding.

If Henderson really wants to “Play outside the duopoly” he needs to play completely outside the politics by forgetting about trying to win elections and instead use the LP strictly as an educational platform in the guise of running for office. Stop counting votes and voters and start counting new committed supporters of libertarian philosophy.

Henderson cites Toastmasters’ Laws of Persuasion that points out “one needs a balance of logic and emotion to sell an idea.”

If you want to advocate libertarianism you must know your philosophy and know your audience and be prepared to interact with your audience on the issues that most concern them. Otherwise you’re not communicating; you just end up talking past each other.

Don’t choose between either/or, choose all that you can handle.

And for the record: Libertarians are just as compassionate as everyone else; we just want voluntary compassion, not coerced “compassion.” The very act of rejecting coercion, bullying and fraud is the first act of compassion.

Libertarianism is an individualist philosophy. We should never allow ourselves to become dogmatic ideologues. What we all need to keep doing is never agreeing to disagree but always disagreeing to agree. It’s the constant disagreeing that ultimately brings agreement by creating a free society that celebrates disagreement.

By rejecting the legitimacy of coercion, bullying and cheating we can all live in peaceful disagreement together.

Rick Henderson’s full article in Think Liberty Ten insightful suggestions from a young libertarian voice that focuses primarily on Libertarian Party activism but should be extended to the full scope of the libertarian philosophy.

More about LP infighting The author insists “we must act upon our common interests and not our disagreements” and asks other libertarians for their opinions which are, unsurprisingly, as diverse as embracing everyone and abolishing the LP.

New to libertarianism and the Zero-Aggression Principle? From “The Basics” to “Morality and Law” to many ideas in between you can jump in and learn about the voluntary post-statist concept of “governance” as opposed to coercive “governments.”

How to live peacefully in a free society “Socialism is inherently immoral unless it becomes voluntary” — “Capitalism is potentially dangerous unless it is bound by common law or the Non-Aggression Principle.” Voluntary Socialism by marleyjames.