It is the sound of one sabre rattling

If you’re a liberal, you’ve been there. Stop me if you’ve heard this one.

It is the time we’ve come to dread every Thanksgiving. It's when your right winged war happy relative you see annually, or semi-annually, gets a few beers in him and says how the USA is the best DAMN country in the world. He stresses that we have to teach (fill in the blank) a lesson about who the top dog is. He will go on and on about how “Johnny” (fill in ethnically offensive derogatory name here) has been getting away with “it” for years and how their (fill in the propagandist unverified rumor of unspeakable horror here) has gone on long enough. He will then go on and on about how all those (fill in the blank)ers are causing the collapse of the American way of life and how the world would be better off if we just kicked their butts into the stone age.

If you know this guy or you are this guy, consider the following article as them or you getting off lightly.

In essence, you’ve experienced jingoism. It is “extreme chauvinism or nationalism marked especially by belligerent foreign policy.” It is sabre rattling. It is war mongering. It is the cry of the ignorant that the way to resolve problems is through the path of war and violence. And if you’re not careful, in the midst of a national crisis or attack, you will be caught up in it.

If this happens while you’re in the throws of any of the pre-war making seductive propaganda or if you are related to a person who died in a terrorist attack or was a war casualty, you are not to blame – you are as human as the next person.

It is when you very coldly sit back and find yourself convinced by “what you heard in a bar” or “what some guy said” or “that’s what my dad always taught me” that you are a true jingoist who jingoistically lives his life. 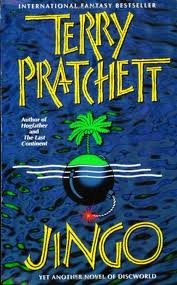 The History of Jingo

It was part of a song by G.H. MacDermott and George W. Hunt. As a song sung in British pubs, it was the chorus part of a catchy tune after the Russo-Turkish War:

We don't want to fight but by Jingo if we do,
We've got the ships, we've got the men, we've got the money, too.
We've fought the Bear before, and while we're Britons true,
The Russians shall not have Constantinople.

The common vernacular was to say “by Jingo” instead of saying the off color and religiously tasteless “by Jesus” – let’s remember, it was 1878, people were more cautious with their swearing.

It became increasingly descriptive of the Theodore Roosevelt Administration’s foreign policy after the events that spurred the Spanish-American War. Roosevelt took the term and seemingly embraced it as the rationale for an aggressive foreign policy and felt that like-minded people were jingoes.

Today, it is rarely heard in common parlance. However, we all have seen it. And in this post 9-11 world, we have certainly felt it.

What are your views on war?

I am not a jingoist.

My attitude to war and war talk has been colored after the events of 9-11. I think of the innocent people who lost their lives senselessly and while I was very passionate in the beginning of the war effort and the swell of patriotism that erupted in this country – especially in the tri-state area, my attitude toward an aggressive foreign policy has changed drastically.

I am more a believer in what Sun Szu said in the beginning of The Art of War.

“The art of war is of vital importance to the State. It is a matter of life and death, a road either to safety or to ruin. Hence it is a subject of inquiry which can on no account be neglected.”

It is the same attitude that I was taught when I took up martial arts. It is something that is used in defense only. You need to know it; but so deadly is it, you should do your best to avoid using it. When you acquire the knowledge on how to kill someone, it is not knowledge that you should actively seek to use.

Such is the horror of war. There is no honor in killing your brother. There is no reason or justification for spilling the blood of thousands. The cost of war is paid for by the dead, injured, crippled and lost. While the wine of victory is always sweet to the warrior, in truth, there is only one winner in war and it is Death, standing alone on a mountain of skulls.

Go ahead, jingoes - call me a bleeding heart. If me being a bleeding heart can save the life of one casualty of war, then I will bleed for it and live my life in rationality and sense.