Many People Have Heard of the Poison Sarin, But Don't Know What it is

The very notion of a poisonous gas is enough to send fear and terror through whole communities. The effects of Sarin are lethal, and it is banned for use in many countries and its use is considered to be a war crime.

Sarin is an odourless, tasteless and colourless liquid, made from a combination of four chemical compounds.

Similar to organophosphate pesticides, the man-made chemical Sarin was discovered to be a toxic nerve agent in Germany in 1938 whilst scientists were working on making stronger and more effective pesticides.

The History of Sarin

In 1939 the formula was taken up by the German chemical warfare department. Germany built plants to produce Sarin during World War II, but fortunately did not use it against the Allies.

Sarin is known as GB, one of the G-series of volatile liquid nerve agents

In the 1950’s, sarin was produced by the USA and USSR for military purposes and experiments were conducted in the UK.

Syria started stockpiling chemical weapons in the early 1980s, after they were defeated in various wars against Israel and Israel’s development of nuclear weapons. Both sides in the current Syrian civil war have accused each other of using sarin gas.

In 1988 the Kurdish city of Halabja in Northern Iraq was bombed with chemical bombs including sarin, killing about 5,000 people in the poison gas attack. It may also have been used in the war between Iran and Iraq.

In 1993 and 1994 there were two incidents in Japan where sarin was released, and in the first attack, eight people were killed and hundreds injured. After the Tokyo Metro attack, twelve commuters died and over five thousand were injured.

Sarin is difficult to trace because it evaporates and disperses quickly but remnants are left in the place where it is used. Investigators would need to obtain evidence from hair, blood, urine, tissue or soil samples, and to obtain these, they would need to have access to the suspect area and victims.

Sarin interferes with the neurotransmitter acetylcholine, which switches off glands and muscles. When the switch is blocked, the muscles are over-stimulated, which may cause death from asphyxiation when the muscles used for breathing malfunction. Symptoms from contact with sarin vapour are triggered immediately, whereas contact with liquid sarin may produce symptoms within a few minutes and up to eighteen hours.

With a low dose, symptoms are watering eyes, runny nose, drooling, excessive sweating, vomiting and nausea. With a high dose, there may be convulsions, loss of consciousness, paralysis, or respiratory failure followed by death.

Sarin is highly volatile and may be absorbed through the skin. If clothing has come into contact with sarin, it may release sufficient poison to harm other people, and, without immediate and correct treatment, they too could suffer permanent neurological damage.

Death can follow amost immediately if a lethal dose of sarin is ingested, unless a chemical antidote is administered. Sarin is far more toxic than cyanide, and anyone administering treatment should wear protective clothing.

More about Chemical Warfare from Amazon 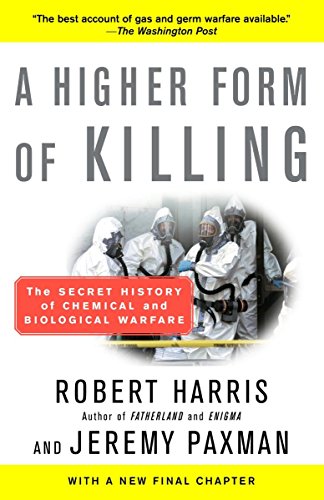 A Higher Form of Killing: The Secret History of Chemical and Biological Warfare
If you are interested in learning more about chemical weapons, you'll find this book a depressing but very informative account of the history of nerve gas
Buy Now

This is a news video by al Jazeera

In the event of sarin poisoning, it is important to deliver the victim to a hospital which has knowledge and the appropriate antidote, as not every hospital has these.

Anything which may be contaminated with sarin should be removed, using rubber gloves, and placed in a sealed bag for proper disposal. Clothing should not be lifted over the victim’s head, as this could cause further gas inhalation, and, if necessary, should be cut away.

The person should be rinsed all over, and washed with soap to get rid of the sarin residue, which is quite likely to poison care givers.

The best antidotes to sarin poisoning are pralidoxime and antropine, which should be given as soon as possible if they are to be effective.

Links to Pages about Terrorism and Poison

Take This Poll About Sarin:

Did you know much about Sarin before reading this article?

News About Chemical Warfare in Syria

What Do You Think About the Use of Sarin in Chemical Warfare?