Who Are Libertarians and Where Do They Come From?

Libertarian Party Prez and VP candidates are making bigger news than any other LPers before them. They’re showing up on all the cable news networks, all over social media, and most impressively they’re raking in Newspaper endorsements from biggies like the Chicago Tribune (Barack Obama’s and Rahm Emanuel’s domain as well as Hillary’s Hometown), the Detroit News (Big Union’s bailiwick) and smaller outlets in New Hampshire, Richmond, and Winston-Salem.

Unfortunately, this leaves the majority of non-libertarians with the impression that libertarianism is just a political idea dreamed up by “Republicans who want to smoke pot.” Few get that libertarianism is a full-blown movement embracing personal freedom, individual responsibility and the deeply held conviction that all people should be treated as unique human beings rather than as interchangeable parts in some big tribal group.

So the question for many is who exactly are these people who call themselves libertarians, how did they get this way, and where did they come from?

Radicals for Capitalism: A Freewheeling History of the Modern American Libertarian Movement” (Note that the capitalism Doherty champions is not the Marxist, statist, corporatist, fascist crony form of capitalism but the Adam Smith Frederic Bastiat Ayn Rand laissez-faire free market form of capitalism. The former is not libertarianism, the latter is.)

After briefly tracing the philosophy’s roots in the enlightenment and classical liberalism and its introduction to Americans via writers, philosophers and novelists he then zooms in on the period from post-World War II to the present (that being 2008 when the book was published.) 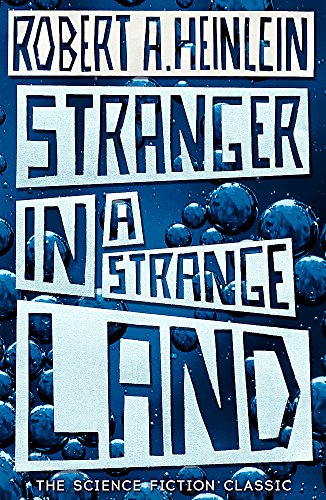 This is the libertarian SF classic of a Martian-raised human who brings enlightenment to the people of Earth through “grocking.” As one critic put it, "the book's major theme can be seen as an extended definition of the term."

Important: This is the uncut version published posthumously in 1991 containing 60,000 more words than the 1961 original.

Many of today’s Libertarian Elder Statesmen/Stateswomen (aka Radical Codgers and Cougars) pursued similar paths. They were those who grew up with little pressure to conform socially, politically, religiously, which left windows open for them to think for themselves.

In their youth they may have eagerly read stories of famous heroic personalities, both real and fictional. From their early teens many discovered and devoured the works of Golden Age libertarian science fiction writers like Robert Heinlein, Ray Bradbury, Alfred Bester, Poul Anderson, and Eric Frank Russell. Discovering the Objectivist beliefs of Ayn Rand in college was a completely natural, logical and obvious transition. So was voting for Barry Goldwater in the 1964 presidential election.

From there a long list of individualist writers and thinkers displayed their libertarian talents in philosophy, politics and economics until the Libertarian Party burst upon the scene (or more accurately slipped into people’s consciousness one freedomphile at a time).

But even then many older “early-adopters” moved on into the greater world of libertarianism beyond, delving into voluntaryism, mutualism and agorism.

Penn Jillette, “the louder, larger half of Emmy-winning magic/comedy team Penn & Teller,” told Newsweek recently that he was on a path to become a traditional liberal. At 18 he was already working in show business, had a ponytail, and came to libertarianism “from a purely hippie point of view. I have always been a peacenik.” But he listened to a libertarian friend and slowly changed his mind.

Before joining the Fox News Channel John Stossel was a crusading liberal consumerist journalist for ABC’s 20/20, winning 19 Emmy Awards criticizing business. But he was becoming increasingly skeptical with government intrusion into the marketplace. When asked at a 2012 book-signing on the SMU campus in Dallas what changed him from a liberal to a libertarian he had a two-word answer: “Reason Magazine.”

This book is an inspirational companion to Marc Guttman’s later anthology "Why Peace." People from around the world tell their own stories of how they came to libertarianism, frequently following encounters with “the machinery of aggression and coercion.” In the process most abandoned their old negative collectivist ways of thinking.

More recent libertarians have found different pathways to the movement. Perhaps they were introduced to the ideas from the Presidential campaigns of Ron Paul or Gary Johnson during their 2008 and 2012 campaigns.

But the discovery, or re-discovery, of libertarianism has become a worldwide phenomenon. In the 2010 book Why Liberty 54 people tell their own stories in answer to the book’s subtitle, “Personal Journeys Toward Peace & Freedom.” They’re not just philosophers and economists and judges but soccer moms and small business owners and police officers and paramedics. They come not only from around the world but from around the ideological universe. Some were former conservatives, liberals, socialists, communists or completely nonpolitical.

Perhaps the freest and most fortunate libertarians are those who grew up with movement parents. Libertarian ideas, expressed around the home while growing up, came naturally to them.

A Minnesota man remembers running through a snow-covered farm field with his LP member Dad and about a hundred other people to protest high tension power lines being built across private property after the state had illegally transferred eminent domain rights to a private company. It was 1974 and he was ten years old. His views are still libertarian today. His kid sister who was also there that day barely remembers it, but she told her father for the first time this year, “I’m voting Libertarian.”

Valerie, Editor at the Peace, Freedom & Prosperity website says simply, “I am one of those rare, lucky people born to parents that encouraged and fostered individualism and thinking” and then adds, “I am an anarchist and anarchy is love.”

Where all libertarians must come from is the Non-Aggression Principle.

There can be no definition of a “real” libertarian since libertarians, being the individualist thinkers that they are, have as many definitions for “real libertarians” as there are libertarians. But at the very least a libertarian, to be a libertarian, must accept the Non-Aggression Principle against coercion, intimidation and fraud – no matter whether the NAP is seen as a utopian ideal, as the ultimate goal for humanity or somewhere within those extremes. Without the NAP no definition or discussion of American libertarianism is possible.

People who reject libertarianism reject the NAP whether consciously or not. They typically fall into two categories: (a) Those who never got it, and (b) Those who never gave up their addiction to forcibly controlling other people’s lives. Read any article by anyone who ever claimed that they were once, or will never be, a libertarian and you’ll always see the same familiar patterns.

One writer claimed to be “perfectly libertarian” on civil liberties matters but rejected libertarianism because, although he never explicitly says so, the NAP prohibits thought crimes – it rejects the use of government coercion to enforce anti-discrimination laws “based on compassion.” Whose compassion? His of course.

Another was attracted by the Libertarian Party’s “conservative” positions – supports First and Second Amendments, concerned about executive powers, skeptical about democratic socialism – but “I ultimately find libertarianism as a political philosophy too simplistic to be put into practice.” Translation: Individual freedom and personal responsibility is too simplistic. Apparently a convoluted, complicated, inexplicable philosophy like we already have is better.

This will of course cause the vast majority of (lower case L) libertarians to laugh uproariously.

Libertarians already know the “need” for government regulation: The application of coercion, intimidation and fraud by power-wielding elitists against everyone else for the benefit of the elitists..

To justify himself this writer explains “Capitalism must be regulated if the modern world is to survive politically, economically, spiritually and aesthetically.” What this says is that the writer doesn’t know the difference from statist, crony, corporatist, fascist capitalism as opposed to laissez-faire free market capitalism. He also doesn’t seem to even ask the question “who regulates the regulators?” History has shown us that “Government of, by and for the people” is a myth and that even most socialists don’t get that a “Democratic Socialist Republic” is just another hierarchical power structure for psychopathic thugs.

Forget all of the arguments, opinions, deliberations, dialogues, theories and philosophies. The ultimate answer to the question of where libertarianism comes from is “inside the individual.”

Apparently to be, to become, to remain a libertarian some sort of indefinable spark must exist in an individual’s being. Libertarianism has to be embedded in the blood, in the genes, in the DNA, in the heart, in the soul, in the synapses of the brain, in the very essence of who a person is. It must be so firmly entrenched in the spiritual core of the individual that it cannot be shaken by rhetoric or argumentation or faith, or by justifications or excuses and evasions.

Life is. Love is. Libertarianism is.