Are Muslims Terrorists? What Is Jihad? The Truth About Muslims

Why are Muslims labelled as 'Islamic Terrorists?'.

If anything is mentioned in the news about an attack, people are quick to assume that it was an Islamic terrorist attack. Until there is more proof that it was not an Islamic terrorists attack, people automatically assume that a terrorist group like Al-Qaeda carried out the attack. The whole non-Muslim world is against Islam due to the 911 attacks on the World Trade Centre. Although this was not good for the Muslim Nation and many innocent lives were lost, it was only a small group of extreme, non practising and brainwashed 'Muslims' who carried out the attacks. These so called Muslims were ignorant and not God fearing people, because if they were, they would have known that commiting suicide is haram (forbidden) in Islam, and the punishment is eternal torment in the hell fire.

Do you realise what the media have done? They have implanted a seed in everyone's head that Islam and the people who practice it are 'terrosists'. But if people were able to wake up or the covering on their eyes and hearts were lifted, they'd realise that it is not only Muslims who kill people. It is all people from all religions. Christians, Hindus, Jews etc, you name it, they've killed people, whether it be by bombing, shooting, random shooting, car bombs etc. Just because there is a nation of Muslims that live in the Middle East with an abundance of oil and other riches that the West can't get hold of, they get jealous and make plans to make the Middle East and Muslims looks bad to the world, thus raging war without clear proof of WMDs (weapons of mass destruction) or whatever.

Do You Feel That Muslims Are Labelled As Terrorists?

Enhanced Interrogation: Inside the Minds and Motives of the Islamic Terrorists Trying To Destroy America
Buy Now

If people used their own intelligence to decide on an attack that has taken place, instead of agreeing with everything thrown at them and conforming to everything in the media, there would be more people with sense in the world. Saying this, there are many people who don't just jump on the bandwagon and understand that Islam is not a 'violent religion'.

There are websites who pretend to be Islamic websites with translations of the Quran, but the chapters and verses have been translated to mean something totally different. So when blind and heartless people go onto these websites and read 'kill anyone and everyone you see around you', they believe it and think bad of Muslim people, and also think that generally Muslims are hiding things. If you really knew a GENUINE, 100% PRACTISING, NORMAL Muslim who follows the religion according to the Holy Quran, then you will begin to understand that Muslim people are not 'terrorists', and they haven't been told by their God to kill non muslims or hurt them in anyway. In fact, Muslims are told in the Quran to respect, help, support, visit and share things with their neighbours whatever their religion may be! There are many Muslim peopl who have non-Muslim friends from different parts of the world.

The media have intentionally created fear in the general public for some reason. The terrorist attacks in USA and around the world have killed many victims, and it is not right. To take innocent lives is forbidden in Islam, because only Allah has the right to give and take any form of life.

When a Muslim person does kill someone, then it is all over the news with 'Muslim' hilighted, but if someone else kills who is from another religion, then their religion does not get brought up. Does anyone ever wonder why? The whole world is against Islam, because IT IS THE TRUE religion.

Allah has not told any Muslim in any book to kill non Muslims, it is the Almighty God who gives life and takes life. Any Muslim who kills another human being will taste the HELL FIRE, no doubt, and Allah knows best. Only TRUE, HONEST Muslims FEAR ALLAH and are on the straight path. These types of Muslim people pray for everyone in the world. So after all this, how can Muslims be bad people?

If you do not know any Muslims, then try to get to know one who lives nearby and make your own mind up if you think they are 'Islamic terrorists'. You may find that Muslim people are very generous, welcoming, warm hearted and overall honest people. On the other hand, be aware of some Muslims who are or may be brainwashed and only talk about politics, power, who are against other religions and seem unapproachable,

I am a Muslim myself and there are Muslim people i know who are or try to promote the religion which is not according to the teachings of the Quran and not in line to the traditions of the Prophet Muhammad (pbuh).

Do You Or Have You Known Any Good Muslims?

When people hear the word, 'Jihad', they think 'Holy War'. In some cases this is correct, but in reality every single Muslim person carries out Jihad in their lives until the day they die. How? We will find out, but what we need to understand first is that Jihad is a religious duty of every Muslim person. Jihad means to struggle and strive in the way of Allah. Jihad also means to defend Islam and to improve the Muslim the society. These can be broken down into:

Jihad also means, which is the 'big one', is to defend Islam. Jihad is warfare when Muslims have to defend their religion, wars against unbelievers, apostates, rebels, highway robbers and dissenters renouncing the authority of Islam. Jihad does not mean to either forcefully or unforcefully convert non-muslims to Islam.

This is where brainwashed Muslims misunderstand the message in the Quran and Traditions of Prophet Muhammad (pbuh). They take it upon themselves to improve the world without considering the innocent people.

I hope this information has been helpful and you can understand Islam from an Islamic point of view. 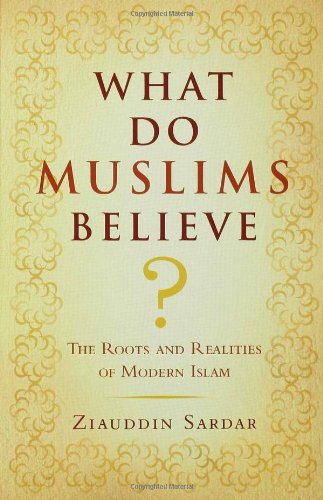 What Do Muslims Believe?: The Roots and Realities of Modern Islam
Buy Now